Meet the preLighters: an interview with Heath MacMillan

Heath MacMillan is an Assistant Professor at Carleton University in Ottawa. His lab is studying the mechanisms of thermal tolerance in insects and aims to answer questions like ‘Why can one species survive a Canadian winter while the other cannot?’ We caught up with Heath to talk about his research, lab and preprints. 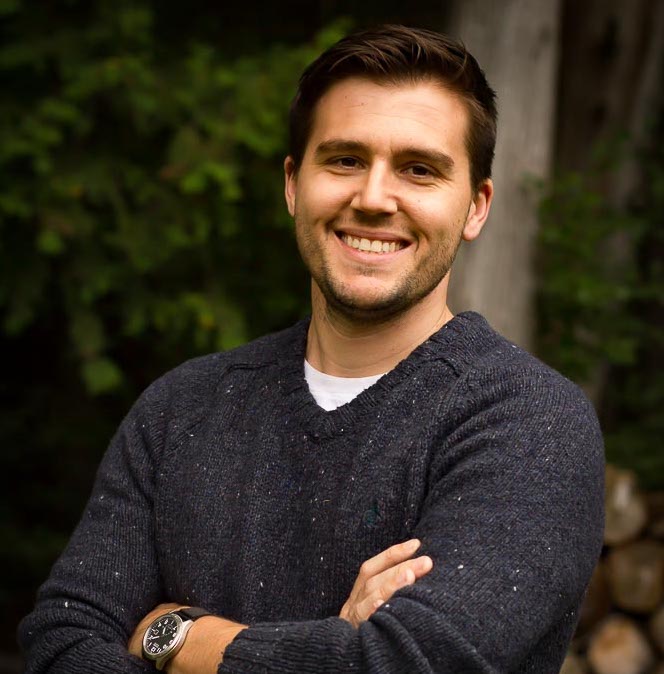 What inspired you to become a biologist?

I think there are actually two parts to this question: what inspires you to have a love for biology, and what inspires you to do science as a career. I’ve always had a general love for the natural world; when I was a kid, my father liked getting out there and we often went on camping and canoeing trips – in Canada it’s quite easy to disappear in the woods for a week. What motivated me to become a physiologist is that I loved observing animals and always had a tendency to want to understand how complex things work.

And how did you then end up studying insects for most of your career?

Actually, when I started university I didn’t have much interest in insects, I just kind of fell into the insect world. At the University of Western Ontario, I was inspired by Jim Staples and Brent Sinclair. I first asked Jim – who is an expert in hibernation – if I could do my bachelor’s thesis with him, but he was just about to leave for a sabbatical year. A week later, Brent Sinclair came in to give a guest lecture, and so I approached him as a potential supervisor. During my thesis, I quickly got excited about all the questions you could study in insects and continued to work with Brent for my PhD.

What were the questions that you were trying to answer during your PhD and later on in your postdoc?

My PhD focused on what sets the limits to the stress tolerance of insects. There was an observation that when you put insects in the cold, they tend to lose ion balance and it was my job to find out how this happens and where the ions are leaking. I was lucky that I could carry this question through my career; both of my postdocs were following up on the ideas that were generated during my PhD. During my first postdoc with Johannes Overgaard in Denmark, I looked at the evolution of cold tolerance among different insects and tried to narrow down the mechanism. This research directed us to the renal system as being important to insect cold tolerance. I then did my second postdoc with Andrew Donini, an expert in insect ionoregulation. Thermoregulation and ion balance were two fairly independent fields, and I established my research program by combining these two worlds. Currently in my lab, we are focused on understanding what sets the limits to thermal tolerance at the molecular level.

Many experimental biologists do a lot of work in the field. Is this also true for your research, or have you done most of your experiments in the lab?

Throughout my training, I ended up doing a lot of lab-based work. When I started my first postdoc, I told Johannes that I really want to get out into nature and test some of my ideas in the field. We ended up doing kind of semi-field work, where we go out and collect insects, and then bring them back to the lab for experiments… I am sort of a reductionist, so I like to control as many variables as I can! The results are obviously going to be a bit different from what we would get in the natural world, and there are different schools of thought about whether or not it is worthwhile to do this kind of lab work if it doesn’t perfectly apply to the field. I tend to agree with those who say that we can’t begin to understand how things work in the field until we’ve understood it in a simpler, controlled system.

You have published an impressive number of papers. Do you have a favourite study?

I often feel that my favourite studies are the ones that took the least time. While doing my first postdoc in Denmark, we kept on measuring insects in the cold and showing that they suffer from hyperkalemia, which means that their potassium levels go up before they eventually die. But I wanted to get at this more mechanistically, so I took tissues out of animals and put them into a high-potassium environment. This allowed me to answer whether high potassium was causing injury, or if increasing potassium concentrations and injury just happened to occur at the same time. From conception of the idea to publication took only something like 6 months, but for me it is one of the most important pieces of work that I have done. It showed that high potassium indeed causes cell death, but only in the cold (and not at warmer temperatures). Mads Andersen followed this work nicely to show that cold and high potassium are interacting through membrane potential.

Since the launch of bioRxiv, you have posted many of your studies as preprints – why is it important to preprint your work?

First of all, I think posting preprints is something we should all be doing; for me there are two main reasons. From a broad perspective, basic science is largely publicly funded in most countries, including Canada. So in my mind, it is absolutely critical that the outcomes of that science are also available to the public. By posting your work on a preprint server, you are making your work freely available to anyone who is interested in reading it.

From a personal perspective, posting preprints increases the exposure of my work, which increases citations. It is especially important as an early-career scientist that people acknowledge that you exist and that the work you are doing is important.

‘Basic science is largely publicly funded in most countries, including Canada. So in my mind, it is absolutely critical that the outcomes of that science are also available to the public’

To me it seems like preprints in experimental biology are less popular compared with many other fields. Do you also feel this?

Yes, I do feel it but I don’t know the reason why we have been slower to adopt preprints. I think in general, there might be some reluctance to put your work out there in the world without any vetting, and thereby risking looking foolish. Every time I am collaborating with colleagues on a project, I try to push them to preprint the work. Sometimes it’s easy to convince them and sometimes it’s more challenging – in the latter cases, the arguments are usually that they are not comfortable to put the work out before it is peer reviewed.

Nevertheless, I do think that people in the physiology field are starting to use preprints more. An important step in this direction has been journals allowing – and having a system – to submit to a preprint server at the same time as submitting to the journal.

Your support for open science also shows on the MacMillan lab website, where the reader can check out conference posters by your students.

Yeah, I think this is a good way to show what we are up to at the moment. It’s also helpful from a recruitment perspective; this way people can see that students in my lab are accomplishing things and succeeding, so they can accomplish things and succeed too.

I also benefit from being in a field that is not highly competitive. I’m not holding any of our data close to my chest, because the chances of me being scooped are relatively low. There is way more diversity in insects than we can possibly study!

What was your main motivation for joining the preLights project?

As I mentioned before, making sure that people are being able to access information that they have paid for is critical. Apart from that, our time as academics is always being assaulted from different directions, so having some process that helps us point to interesting things as soon as they come out and also summarize them for us is really helpful. Finally, being part of preLights also helps in reading more widely; it’s very easy to fall into the trap of just reading things that fall into your lap or are closely related to what you are doing. But that’s often not where the best insights come from! I’ve also intended to write preLights posts as a lab exercise; this hasn’t really taken off yet, but I hope that I can still get my students excited about it.

Now as a junior PI, do you enjoy different aspects of science compared to when you were a PhD student and a postdoc? And what’s the best part of being a group leader?

Throughout my training, I was always excited to be in the lab and do hands-on experiments with animals. These days I get excited about data analysis more than anything; I love it when students show me data! I’m sometimes almost trying to steal it from them and do data analysis to get to the answer quicker. I also really enjoy writing now – this is something that kind of just happened organically over time.

As a PI, the thing I enjoy the most is seeing my students grow as scientists. They often come in the lab with no experience with insects – which was the same case for me when I was an undergrad – and watching them get interested about questions, generate new data and generate new knowledge is very rewarding! It’s just really exciting to watch someone go through those same experiences you had as a trainee.

Finally, tell us something that people would not know about you!

When I was starting university, I applied both for biology and for visual art, so I was very close to becoming an artist. Although I’m glad it turned out the way it did, I do try to incorporate art into much of the stuff I do. For example, a lot of my papers have little cartoons in them, and I’ve taught myself how to make flash animations and incorporate these into my presentations – I think they make the talks more engaging for people. It’s interesting how these two things – art and science – may seem so different from each other, but skills in one can definitely translate into the other.