Meet the preLighters: an interview with Samantha Seah

Samantha Seah is a PhD student at EMBL, Heidelberg in the lab of Christoph Merten. She trained as a geneticist, and now develops microfluidic technology for antibody screening. We caught up with Samantha to talk about different aspects of science, preprints and preLights. 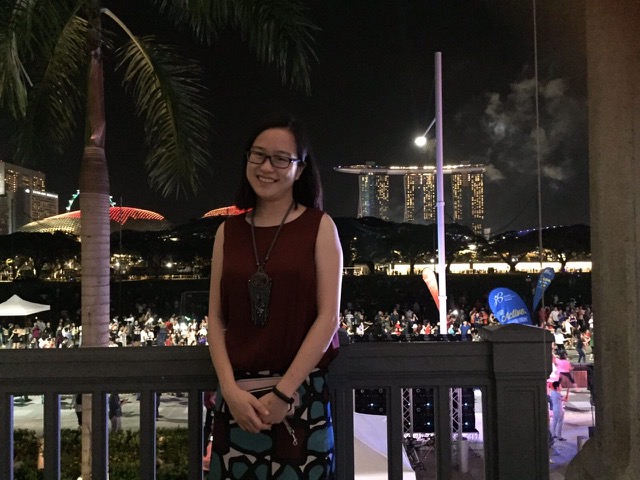 Could you tell us about the path leading to your current position?

I did my Bachelor’s degree in Cambridge, where I really enjoyed the vibrant research culture. I spent the summer of the second year of my degree at the Karolinska Institute in Sweden, working more on technology development to study the effect of nutlin – which activates p53 – in cancer cells. This was followed by a year in Singapore, where I was developing CRISPR screens using histone-modifying proteins, and studying transcription factor interactions in stem cells and pluripotency. So, I’m trained as a biologist, but also really interested in technology as well. That’s why I decided to do a PhD at EMBL in a lab that focuses on technology development, to help answer important biological questions.

What kind of technology are you developing in your PhD project?

We are using droplet microfluidics for antibody screening. The idea of this technique is to make many droplets with volumes in the picolitre or nanolitre range. If you then encapsulate antibody-secreting cells – such as B-cells or hybridoma cells – you can get functional antibody concentrations in a matter of hours (because of the tiny droplet volumes). Using this method, we can perform functional antibody screening more effectively. Most of the current functional assays are carried out in 96-well plates – these take a lot more time because you need to expand hybridoma colonies to a certain cell number, and they also get expensive with increasing throughput. By scaling this down, we can make antibody screening cheaper, faster and less tedious.

Which part of your research do you enjoy the most?

This changes a lot – I might even say that the fact that doing research is so variable and flexible is one of the things I most enjoy about it. Sometimes you spend a large part of your time writing about research, presenting your research or discussing with people; at other times you are, of course, mostly doing experiments.

As an early-career researcher, how do you see the situation for female scientists in STEM?

Things are improving, but there is still a long way to go. There are now more grants for women than before and hiring committees are more aware of the need for diversity. However, there is still a lot of implicit sexism (and racism) happening and women scientists are often under-represented. Recently, for Ada Lovelace Day [international day celebrating the achievements of women in STEM], a group of us at EMBL joined a Wikipedia page-editing session to increase minority representation on Wikipedia. It was fun and actually my first time editing Wikipedia.

Let’s move on to preprints, why do you think they are important?

Preprints are really important for accelerating progress and scientific discovery. A big problem with the current publishing system is that it takes a long time from submission to publication; during this time, the results are not accessible to the general public and scientific community, so other people can’t build on your discoveries. Preprints are a good way to bypass this. Preprints are also a good opportunity to get feedback on your manuscripts – not just from reviewers but also from any member of the scientific community. I haven’t published a preprint yet, but some of the recent papers coming from my lab were first posted as preprints, which I thought was very cool.

What was the reason you applied to become a preLighter?

There were two main reasons. First, I wanted to support preprints, and preLights does this by exposing them to the wider scientific community. This can encourage people to give feedback on preprints and, in general, makes people more aware of them. I hope that it will also encourage more scientists to publish preprints. The second reason was that I wanted to spend more time on science communication and science writing, so I thought this would be a good opportunity to practice and hone my writing skills.

“I wanted to support preprints, and preLights does this by exposing them to the wider scientific community. This can encourage people to give feedback on preprints and, in general, makes people more aware of them.”

You joined the preLighter team this summer. Apart from the many preprint highlights you’ve posted, you also contributed to writing a commentary in support of preprints with eight other fellow preLighters. Could you tell us about this experience?

When the article ‘Preprints could promote confusion and distortion’ came out in Nature News, a few of us decided to write a rebuttal together. We discussed some points through Slack and then wrote a draft. Everyone was simultaneously editing the draft, changing it here and there…it’s pretty much the most collaborative thing I’ve ever done! We were also located in very different places geographically, so you had the Europeans editing the piece and sort of being happy with it at the end of the day, and then preLighters in Canada and the US suggesting some more changes to the text. It was really cool!

You are now in the third year of your PhD. Do you know what you would like to do after you finish?

I definitely want to stay in science, but I’m still not completely sure in which capacity – in academia, industry or something else. I would like my work to involve some science communication and also science mentorship. I find it important to work with young scientists and mentor them; I think I would also benefit from all the innovative and sometimes radical ideas that they have.

Finally, is there anything surprising that people might not know about you?

I really like to read and I’m on my way to finishing over a hundred books this year. I read both fiction and non-fiction; I like books about popular science in topics that are not in my field. I also like to read about discrimination, sexism, racism and equality in general.

Another thing that tends to surprise people is that my native language is English. I grew up in Singapore, where English is the main working language. Therefore, I’m always surprised that people find it surprising!