Baheerathan Murugavel is a PhD student in the lab of Professor Hema Somanathan at the Indian Institute of Science Education and Research Thiruvananthapuram (IISER TVM). His research focuses on the visual ecology of fruit-feeding bats in southern India, and he has written several preLights posts on research related to bat behaviour and ecology. As well as writing for preLights, Baheerathan does a lot of science communication and outreach work related to the public understanding of bats. We spoke to Baheerathan about his interest in bats, science communication, and why helping the public to understand bat biology is important. 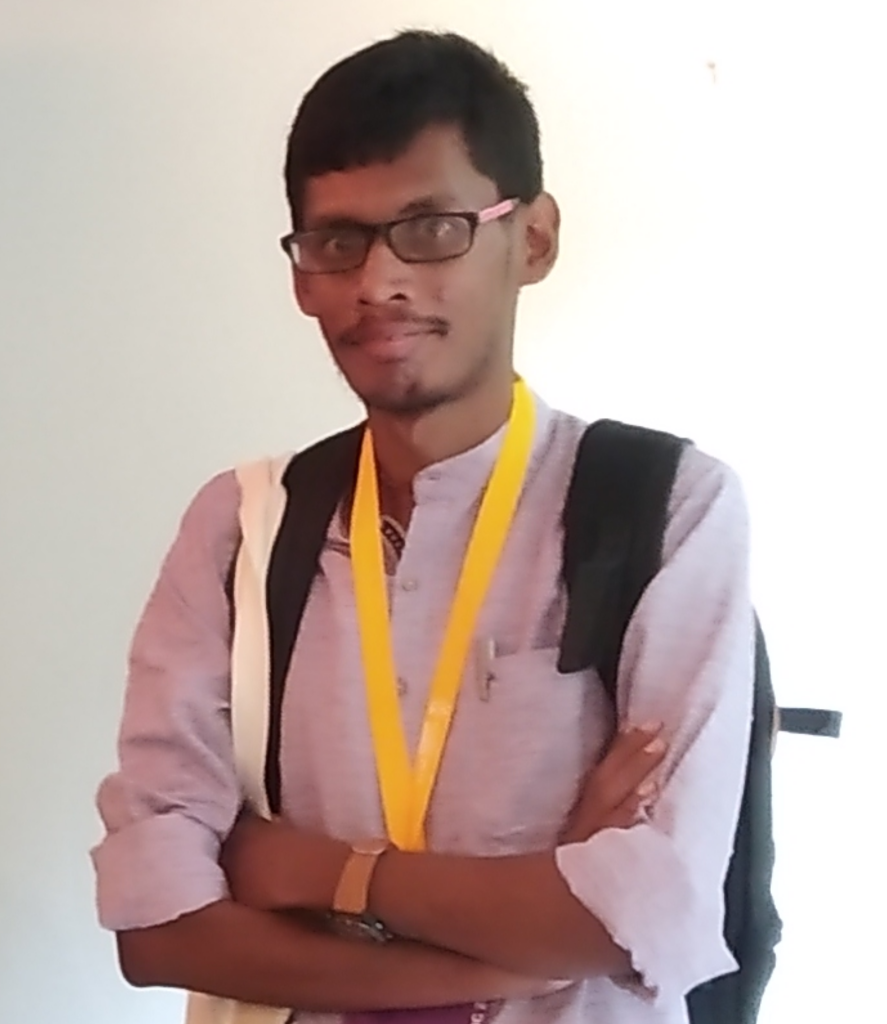 Can you tell us what inspired your interest in the natural world, and bats in particular?

I was interested in animals from my childhood and was often trying different things to understand the natural world. I pursued engineering as an undergraduate degree, but I started to focus on bioengineering and developed a much greater interest in the biology part than the engineering part. After completing my degree there was the choice to either continue towards an engineering profession, or to switch careers, and so I ended up doing a master’s degree in genomic sciences.

The institution where I studied for my master’s degree had lots of different departments, and I came across an internationally-recognised research group who had been working on bat behaviour for almost 40 years. They were known to study many different species of bats, not just one or two – India has over 120 different species of bats – and so I began working on bat behaviour for my dissertation, despite it being a genomics degree course. A lot of what people think they know about bats is negative, and they are often considered a bad omen, but there are so many interesting things about these animals and so little has been explored. I’ve been working with bats for seven years now, so although my master’s degree was how I ended up working on bats in particular, the interest in animals was there from my childhood.

What are you focusing on now for your PhD?

I’ve always worked on bat species that do not echolocate. Fruit bats are the only group of bats that do not echolocate, so they rely primarily on their sense of smell and vision for their foraging and daily activities. I couldn’t continue in the same lab that I did my master’s in as the professor I worked with there was close to retiring, so I moved to a different institute for my PhD. My current research group is exploring different questions in plant-pollinator interactions and sensory ecology, including how pollinators interact with different plant cues in the tropical parts of southern India. When I joined the lab as a grad student, my PhD supervisor was very welcoming and open to new ideas, and that’s how I brought bats into the group! I’m focusing on how bats use vision to navigate or respond to change in natural and artificial lighting.

You mentioned working in a genomics institute during your master’s. Are there a lot of genomic data available from different bat species?

When I started, there were very few complete bat genomes – maybe one or two. In the recent past, particularly in the last five years, there have been a reasonable number of bat genomes sequenced, but it’s still not enough. There are over 1400 species of bats, and each of those species has interesting things hidden at the molecular level or the behavioural level. The Bat 1K Genome Project is a global initiative to sequence all bat genomes and better understand genomic aspects of different species of bat, but at the moment I’d say we’re behind compared to other organisms. 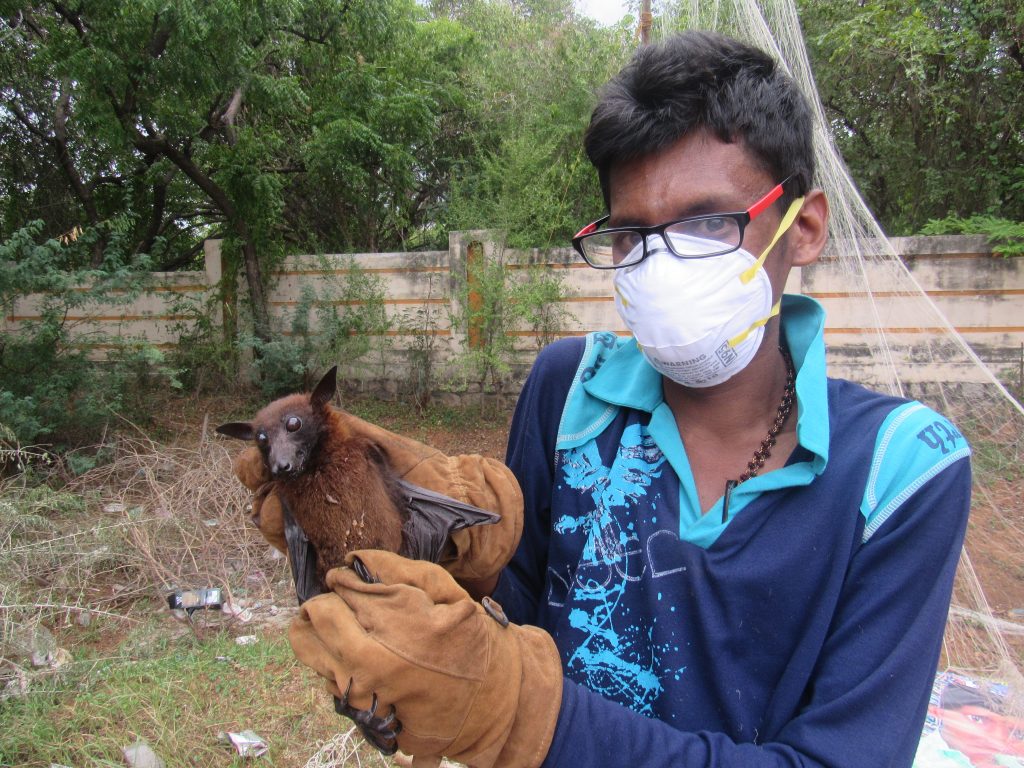 Baheerathan with an Indian flying fox

From your social media it’s clear you do a lot of science communication around bat biology, including speaking at various events for the recent 2021 Bat Week. Can you talk a little about your motivation and enthusiasm for getting involved with so much outreach work?

As well as understanding the natural world as a child, I was also very much interested in communicating that interest to other people. Talking about science and hearing new opinions from non-experts always triggers interesting questions and can even motivate you to think about aspects of your science from a new perspective. I do lots of science communication [relating to my own work] and I also write about science in regional languages too.

For me, talking about bats is important because I’m studying bat behaviour in wild bats living in their native habitats. When I go to field sites they are often on the edges of villages or urbanised areas, and most of my work occurs at night. Obviously if you’re turning up at these places to work in the night, you’re going to get questions from the public, and that’s a great way of getting an idea of how people perceive bats. Sometimes that’s out of curiosity, and sometimes it might be fear or suspicion, as bats are often viewed as pests or carriers of disease. But there are also cases where people associate bats with sacred spaces in India, and in some of these villages the bats roost underground in tunnels from wells. The bats excrete into the wells, and farmers use water from the wells on their farmland and notice that the crops grow better with this water compared with water from other sources. They don’t quantify it scientifically, but there’s that link there already. Only someone with expertise in these animals could help communicate the science behind bats, and so I think talking to the public about my research is very important.

You’re also a translator for Research Matters India. What does that involve?

Research Matters is a science communication forum that has writers from all different fields of science: physics, chemistry, biology and engineering. We write short articles or stories about research papers, but make sure they’re linked to a public point of view and that the science is written about in a way that is understandable for a general audience. At the same time, we also make sure the study authors review the content so that the scientific accuracy is not compromised. We do this in regional languages. India is known for its linguistic diversity and most of these works are very interesting if you translate them to their local language and allow people to become more connected to the findings. If people know there’s a local research lab, but don’t know what they are working on, then these translations can have a very positive regional impact. We’ve only been doing this for the last one or two years, but we’ve had a really positive response in these early stages.

We spoke to another preLighter about language barriers in science – is that also relevant to your science communication work?

That depends on which level of communication we’re talking about. Sometimes during manuscript review we’ve been asked to run it by a native English speaker, but not always, so I don’t think I’ve ever faced that big of a problem when it comes to writing manuscripts. It’s also not hard to communicate at a professional level, such as speaking at conferences or talking with other research groups. When it comes to the public, not everyone is fluent in English or in the technical terms we use, so it is very useful to make different language choices. Regional language-based outreach works much better.

How did you find out about preLights and why as it something you wanted to get involved with?

I was introduced to preLights by a postdoc who gave a presentation on how to begin reviewing articles and start building a network of scientists. He was a very early preLighter, and I became interested in joining. When I first checked out the preLights website I saw that there weren’t so many animal behaviour or ecology writers, so since I’ve joined I’ve been trying to promote preLights in ecology-related fields

I really like the template we follow as preLighters and trying to convey the science in a nutshell. Interacting with the authors themselves is also really useful. I have had so many good things come from preLights, and I was also given the opportunity (by The Company of Biologists) to attend the British Ecological Society conference last year. So, I’ve had some really good experiences and I certainly wish to continue being part of preLights.

Your bat-related preLights posts often get a very positive response on Twitter. Is there a big bat research community on social media?

Bat Twitter is a really enthusiastic and energetic Twitter community. At least in my part of the country, very few people are working with bats, so it can be hard to network, interact, and think of new ideas. Even for my PhD project, I’ve had so much help from Twitter, and we also run bat Twitter conferences and an annual bat World Cup! The winning species every year gets its whole genome sequenced! I have so many friends across the world from bat Twitter, and it’s great that it’s so enthusiastic.

You’re obviously passionate about science communication. Is that something you’d like to focus on in the future or do you hope to stay in research?

I want to stay in research, as there’s so much that’s waiting to be explored in bat biology. But I don’t have any plans to give up on science communication. I’d like to continue doing part-time science writing, as I’ve been doing for at least five years now. I don’t feel it to be extra work, as I enjoy it, and it can also sometimes take my mind off my research. In a way, I also feel it is my responsibility to communicate research to the public given that I am funded by them. So, I do plan to continue to do both research and communication in the future. 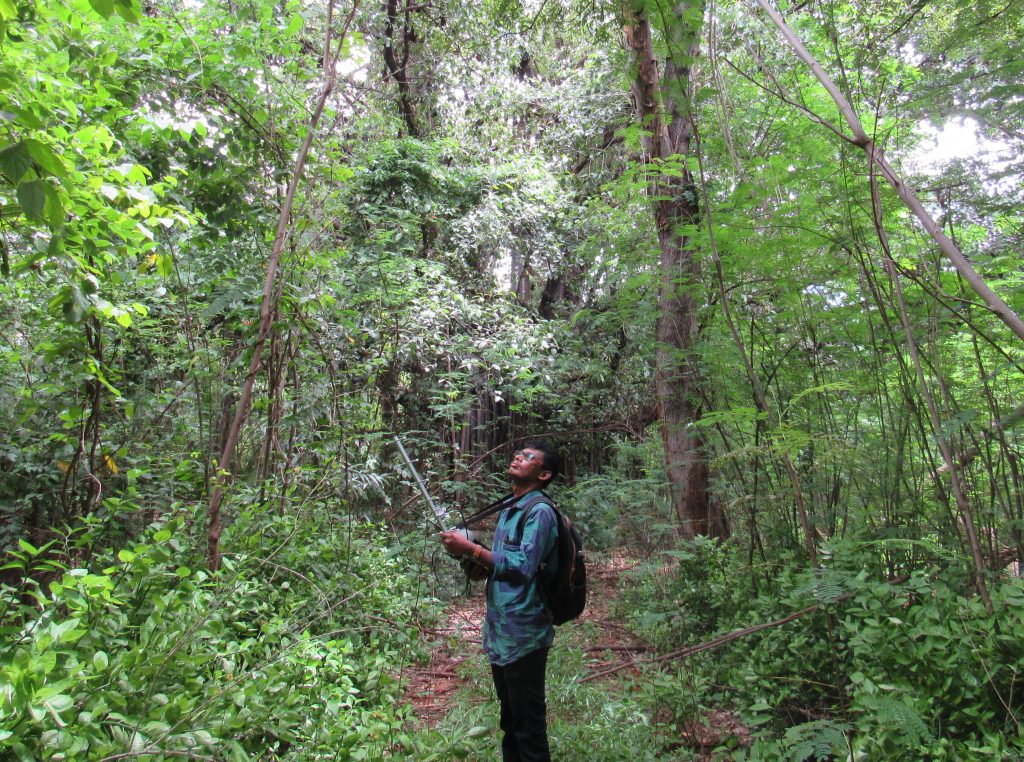 Out on field work!

And to finish, can you tell us about your favourite species of bat?

There are over 1400 species of bats, and each species has its own story. There’s extraordinary diversity within these species: flying foxes weigh up to 1.5kg and have a 1.5 metre wingspan, whereas the bumblebee bat can be 1.5-2g in weight. Morphologically there’s extraordinary diversity, too. Non-echolocating bats have very big eyes, and echolocating bats have bigger ears and wrinkled faces.

I definitely have a bucket list of bats I want to handle in my life! But my favourite species is the one I’m working on, called the short-nosed fruitbat. This bat is common in India and across Southeast Asia. It’s a harem roosting species, which means they don’t live in large numbers. The male will construct a tent in the tree foliage that will recruit females. No two males will coexist in the same place, so it’s a competition involving territorial clashes and defending their tents, which is really interesting. My first project on these bats was looking at their grooming practices. Every evening before they fly out, the bats will clean and groom each other. One bat will start grooming, the second joins, and eventually you have all the bats – one male and between five and ten females – rolling as a ball. And after that ball formation the bats are drenched with saliva and very wet. I was exploring this social grooming behaviour and what the olfactory importance might be, which made me interested in this species. They’re not easy to handle, but they’re still my favourite!