Julia Grzymkowski is a PhD student at North Carolina State University, studying the effect of toxicant exposure on intestinal development. Prior to this she completed an undergraduate degree in forensic science at Virginia Commonwealth University. Since joining the preLights community last year, she has contributed several preLights articles and attended our social writing events. We spoke to Julia about her PhD studies and how she became interested in forensics and toxicology. 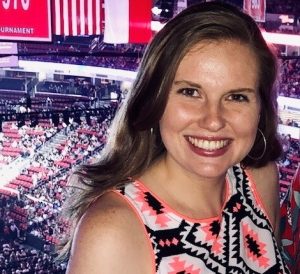 To begin, can you tell us how you came to be interested in science and what you originally pursued at university?

The first thing I can remember is taking a genetics class in high school and learning about Punnett squares. We did a whole project tracing a specific trait – like eye colour – back as far as we could and making a chart to show its inheritance. I remember being really interested in that and thinking I’d like to go into genetics. Then, later in high school, I got really into true crime shows and I took an elective course on forensics to learn a little more about that, and eventually got my bachelor’s degree in forensic science and chemistry. I actually only took one biology course in that time – the one introduction to biology course that chemistry students have to take – because I was really focused on chemistry.

One summer between semesters I interned at a crime lab in Maryland, but before that I had asked a professor in the forensics department at my undergraduate university if I could get some research experience in their forensic toxicology lab and arranged to do that after my internship. Unfortunately, I ended up in a firearms unit for my internship and spent the whole summer organising ammunition! It wasn’t super intellectually stimulating, and even after a tour of the facilities I realised that on a day-to-day basis that sort of job might not be for me as I love constantly learning new things. When I got back to college, I started working in the forensic toxicology lab and I was hooked – I thought the research was so cool, the science was really interesting, and I liked working in a big lab with lots of other students.

What led you to pursue a PhD?

It was really my undergraduate supervisors who encouraged me to go to graduate school. I didn’t really have another plan, so I thought staying in school for a while longer seemed a good option! I started to look more into toxicology from a human health and environmental perspective, and came across North Carolina State University, which has a really good toxicology programme with faculty working on lots of different things. I also liked that when I went to interview at NC State, they showed us that there was an even split of the students who graduated the programme going on to work as academic faculty, working in government, or working in industry. They weren’t pushing students to get a PhD because they had to be a faculty member, and I did feel that other programmes I interviewed at were training students to be faculty only. I started the toxicology programme and eventually joined the lab I did my first rotation in, which is actually a developmental biology lab, outside of the core toxicology faculty. I’ve come from a chemistry background, and it’s nice to be working in such an interdisciplinary programme, but it does mean I’ve had to learn the developmental biology from scratch.

Can you tell us about what you’re working on in your PhD?

We work primarily with frog embryos, which are a good model as they are transparent (so you can see what’s going on!), easy to work with, and develop more similarly to humans than other model systems like zebrafish. As a model system they’re also really high throughput, which is useful for toxicology studies – you can put embryos in a 96-well plate and treat each one with a different chemical or concentration of chemical to screen the effects on development.

Specifically, the lab I’m in focuses on the digestive organs – my PI is interested in how the stomach curves – but my project is taking the lab in a bit of a new direction. I work with a very commonly used herbicide called atrazine, which is widely used in agriculture as a weed killer. There have been a number of epidemiological studies that have linked exposure to atrazine with structural birth defects. The most common birth defect associated with atrazine is called gastroschisis, which is where the baby is born with their intestines outside of their body. During development, the intestine has to go into the umbilical cord to lengthen, because it cannot lengthen to the extent it needs to within the body cavity. Eventually it will come back in, and the body wall will close, but in gastroschisis, the intestines stay outside the body because the body wall doesn’t close properly. Then, usually, the baby will have to undergo surgery to fix that part of the intestine and close the body wall. Although there’s this association between chemical exposure and gastroschisis, nobody has really looked at how atrazine effects development of specific body parts or organs. In the early 2000s there was a lot of research into atrazine being an endocrine disruptor and affecting reproductive development specifically. There were some really big studies that showed exposure to atrazine can cause intersex in frogs, but it’s still quite controversial, and there’s not a consensus on what atrazine actually does during development.

Are there any restrictions on atrazine use?

There are regulations: the US Environmental Protection Agency (EPA) has limits on acceptable levels in waterways and in drinking water. However, a lot of the epidemiological studies looked at women who were living near agricultural sites where it was being sprayed, where atrazine accumulates in big puddles after heavy rain. Interestingly, when I was first doing more research about atrazine in general in the US, just a couple of years ago, the EPA was thinking about increasing acceptable levels and lowering restrictions, but in 2021 they set stronger protections for the next 15 years.

And what have you found from testing atrazine on frog embryos?

I’m focusing on the intestine as that’s the biggest effect we have seen so far. When I expose the embryos to atrazine, they actually develop something called malrotation and intestinal shortening. In the transparent frog embryo, it’s really easy to see the intestine coiling very consistently in an anticlockwise direction in normal development; after being expose to atrazine, the intestines actually rotate in the opposite direction and the gut is shorter. They’re not experiencing gastroschisis, but in humans, gastroschisis is usually associated with intestinal malrotation and shortening – all these things happen together. And our findings suggest that exposure to atrazine very significantly and consistently causes this effect in frogs.

I’m in my fourth year now, so I’ve done a lot of assays, including RNAseq, metabolomics, and respiration assays. Companies market these herbicides as affecting chloroplasts and therefore not harmful to humans, but chloroplasts and mitochondria are very similar in terms of their biochemistry. We want to learn how atrazine might affect respiration and mitochondria in a developmental context. I’ve also looked at the impact at the cellular level by doing immunohistochemistry. During development the frog intestine undergoes a mesenchymal to epithelial transition. Early on the gut is just a rod of cells, and over time the cells become polarised, elongate, and intercalate outwards to form the lumen in the middle, and the intestine has a thin epithelial layer. After exposure to atrazine we’ve seen issues where the cells stay round, are unpolarised, and are mitotically arrested.

This sounds really relevant to environmental policy – do you anticipate your work to have any agricultural policy implications?

My findings show that the impacts of atrazine are very much dose dependent: at a low concentration, fewer embryos are impaired, but if I increase it enough then the embryos aren’t viable. Of course, this is at concentrations that are higher than those found in the environment because we’re trying to establish a mechanism. But there are studies that measure atrazine at pretty high concentrations in large bodies of water. So, our experiments might be representative of people exposed to the chemical at an acute level.

Here in North Carolina, we have the National Institute of Environmental Health Sciences (NIEHS), which is an offshoot of the National Institute of Health (NIH), but specifically focused on the environment and environmental health. They are responsible for literature searches, to analyse studies done on any particular chemicals and to verify that the study was well executed. Then, appropriate studies can be used in reports to inform policy, so my work could be used alongside other studies on atrazine to look at the impact it has on development.

Has grad school been a positive experience for you?

My favourite part of grad school was the first year and a half, where I was just reading so much literature to understand the field and to come up with hypotheses for my project – putting the puzzle pieces together. I really like reading and learning about the field. But grad school is hard. It’s always really cool when an experiment works and tells you something new, but a lot of the time things don’t work, or experiments go wrong. Before the pandemic, I had a lot of good luck and generated lots of great data, but then the pandemic hit, and I was getting into experiments that were new to the lab, and doing a lot of troubleshooting. That was definitely hard and has certainly been a learning experience, but my advisor is very supportive in these new directions and lets me explore lots of different things, which is really nice.

How did you come to learn about preLights?

In the summer of 2021, I went to a workshop about social science and social media, and they talked a lot about using Twitter, so I thought it was about time I made my own Twitter account. I followed a lot of The Company of Biologists pages, and I came across Maté’s page, and his bio mentioned that he was the previous Community Manager of preLights. I clicked through to the preLights webpage and was like ‘Wow, what is this?!’. I’d never really thought about preprints, but I started looking at the site and reading people’s posts and thought it was so cool, so I decided to apply. I’m thinking about science communication/writing/editing as a career, so I’m trying to do more types of science writing and I view preLights as almost being the beginning of my professional development. I would definitely advise other PhD students to join preLights!

And a topic change to finish – I saw on Twitter that you recently got a new puppy! How is that going?

NC State has a big vet school, and they have dogs that are bred specifically to be used for practice for vet students – how to handle them for check-ups, that sort of thing. But the dog I’ve adopted has severe anxiety, so she was very scared of people touching her. I say she was fired from her job, because they really couldn’t use her for anything and eventually put her up for adoption. These dogs are normally adopted at age three or four, but she just turned two, so she’s relatively young, but we thought she’d be a chilled-out dog that’s sometimes a bit anxious. Well, it hasn’t even been two weeks yet and she’s a completely different dog. She’s not anxious, she’s playing with all her toys (and also things that aren’t her toys!), she wants to go see people who are walking by and play with other dogs. We don’t know what’s going on but she’s very very happy! 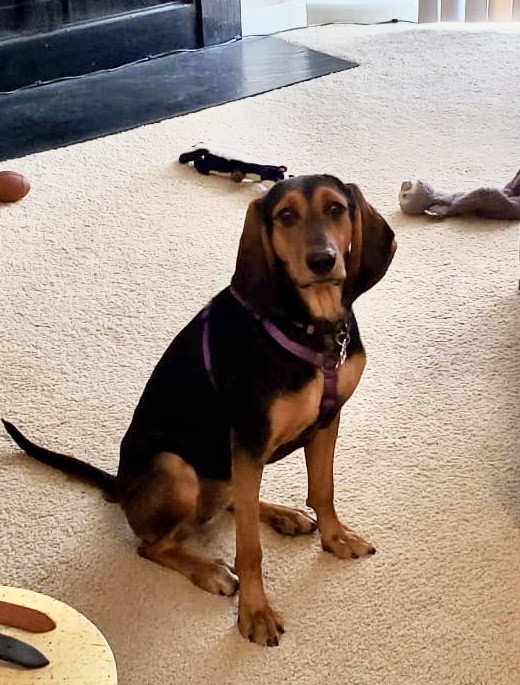