Sophia Friesen is a graduate student in the lab of Iswar Hariharan at the University of California, Berkeley. Their PhD research focuses on developmental timing and the regulation of epithelial growth and patterning, using Drosophila as their model organism. They are also passionate about science communication and diversity and representation in science. In their time as a preLighter, Sophia has contributed several interesting preLights across a variety of different fields. We caught up with Sophia to learn more about their research and interest in science communication. 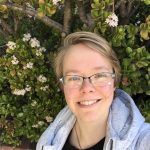 You’re currently in graduate school at Berkeley. What led you to this lab and what is your PhD focusing on?

I was lucky to have really good teachers in high school, and I found that science was definitely the most-well taught subject. I’d always liked science, but I think that helped encourage me even more, and I did my undergraduate degree in molecular genetics at The Ohio State University. I think central Ohio is actually a pretty underrated place, but I’ve moved to Berkeley for my PhD and I love living in the Bay Area – it’s such a unique place to be.

I’m interested in growth regulation: how organs and tissues know how to grow to the correct size, and then stop growing. That’s important not only for development, but also from a cancer perspective, too. It’s an incredible example of a collective outcome arising from behaviours of individual cells. For example, in fly larval tissue, which is what I study, you’ve got tens of thousands of cells that are all having to make decisions about growing and dividing. Somehow, they’re able to read the signals in their immediate environment, grow collectively to the right size and then stop. This in a fascinating problem that nature manages to solve.

What’s something unexpected you found out about graduate school during your PhD journey so far?

I’ve had a very positive experience of graduate school overall, although of course there have been plenty of ups and downs along the way. On the whole, I’ve felt very supported and had a good time, and that’s something I hadn’t expected. A lot of the time when you talk to PhD students about graduate school, they’re really miserable. I’ve met multiple, excellent scientists who had unfortunately been pushed out of graduate school because of a toxic work environment. But I’ve realised a lot of that depends on the lab environment and the PI, and I didn’t realise how broad that spectrum could be. I also didn’t realise that those problems weren’t inevitable – a lot of people think that doing a PhD has to be really unpleasant or leaves you burned out, and I’ve learnt that it doesn’t have to be like that at all.

As well as your research, you’re also very enthusiastic about science communication. Why is this so important, and do you think it’s something that more scientists should be doing?

From a selfish perspective, I just really enjoy it. There are so many aspects of the process I love: interacting with other scientists about their research and learning about new things that are totally different from what I work on. But apart from that, science is incredibly insular. There is all this amazing research that is only accessible to a handful of scientists working on similar things. Whilst it’s important that this work is accessible to the scientists who are going to carry it forward and do new research based on the findings, I think it can also be important to people beyond that sphere – science can be fun and a lot of this work is very cool! Plus, so much of science is publicly funded, but it’s completely publicly inaccessible, whether that’s due to barriers in the way people write about complex things, or financial barriers like paywalls. It is baffling to me that a member of the public can pay taxes into funding research, which is written about in a paper that needs to be paid for to be published and then paid for again to be read. That just doesn’t seem fair.

I think it would be a good thing for more scientists to consider how accessible their research is – especially to people it might impact the most. For example, ecologists should consider how people living in those areas can access their findings, or people who suffer from a certain disease should be able to see what progress is being made in terms of treatment or prognosis. But for science to be made available to the people it’s important to, I do think that structural change needs to happen. Whether that’s more support for outreach, or training in how to communicate science more effectively, there needs to be a bigger effort from the community.

You’re also passionate about increasing diversity and representation in science. Can you tell us more about why this is so important?

It seems to me that there are a lot of people who do care about increasing diversity and equity in science and making sure that scientists from all backgrounds are supported and can flourish. A lot more people are aware of the bigger problems in academia when it comes to diversity, but what I see a lot less of is people trying to put that into action – either because they don’t know how to, or they feel like they can’t really do anything. I’ve been involved in diversity and equity efforts in my department, and two things have really stuck out to me. Firstly, that there has been an immense amount of research into how to improve your teaching to make it more equitable and welcoming for the students in your class. For some reason, people in STEM fields don’t realise that this peer-reviewed research is available: we know how to make teaching better, and now is the time to do it.

Another thing I’ve become aware of is who has the ability to make change. The burden of responsibility is on the people in power to implement these changes, but trainees have more power than we think to create a better environment immediately around us. Obviously, some labs have a huge problem with power dynamics and graduate students can’t change those challenging environments by themselves, but I hope that trainees can collectively help contribute to that structure and culture shift.

Do you think that culture shift needs to happen further down the education system too?

Yes, speaking as someone who has only experienced the education system in the United States, the public school system here is set up very unfairly. Schools in poorer areas have far fewer resources, and that means your learning environment is likely to be disrupted in major ways. You can have the most amazing teachers, but if your classroom walls are full of mould, or if you don’t have the right books, that’s going to be a problem for you and your education and lead to inequities later in high school and at the undergraduate level.

Moving on from research and education into writing about science: what made you want to get involved with preLights?

A couple of reasons really. The aspect of peer editing helps improve everyone’s writing and I enjoy my work being edited, it’s a great way of collaborating with people all over the world, and it’s also a good motivator to read outside my field and read more preprints in general.

Do you enjoy contacting authors to ask them questions about their work?

Absolutely! It was pretty intimidating at first to cold email someone and say ‘Hey! I read your paper, please can you talk to me about it!’, but all of the authors I’ve interacted with have been really friendly and welcoming. It’s just so cool to be able to get in touch directly with people who are doing this awesome science and pick their brains a little more.

In fact, I was a huge dinosaur nerd as a kid – still am really – so I wrote a preLights post on a palaeontology preprint last year about prehistoric flight dynamics. I had such a positive interaction with the author that the preprint was updated to include me in the acknowledgements! My 12-year-old self is just over the moon to be featured on a palaeontology paper.

That is very cool! And shows how useful preLights feedback can be to authors, too. Which leads to my final question: what are you hoping to do after your PhD?

I’m really hoping to pursue a career in science communication – I love interacting with lots of different scientists, I really love showing people what makes science awesome! So, fingers crossed.