Dr Julia Schroeder is Senior Lecturer for Ecology and Evolution at Imperial College London.  Her research primarily focuses on the evolutionary basis of social traits, with studies focused on a wild population of house sparrows living on Lundy Island. Along with her scientific research interests, she also advocates for women in science and has published several papers investigating gender bias in academia. She is on the Steering Committee for EcoEvoRxiv and began preprinting her work early on in the timeline of preprint servers. We spoke to Julia about her research, gender equality work, and preprinting. 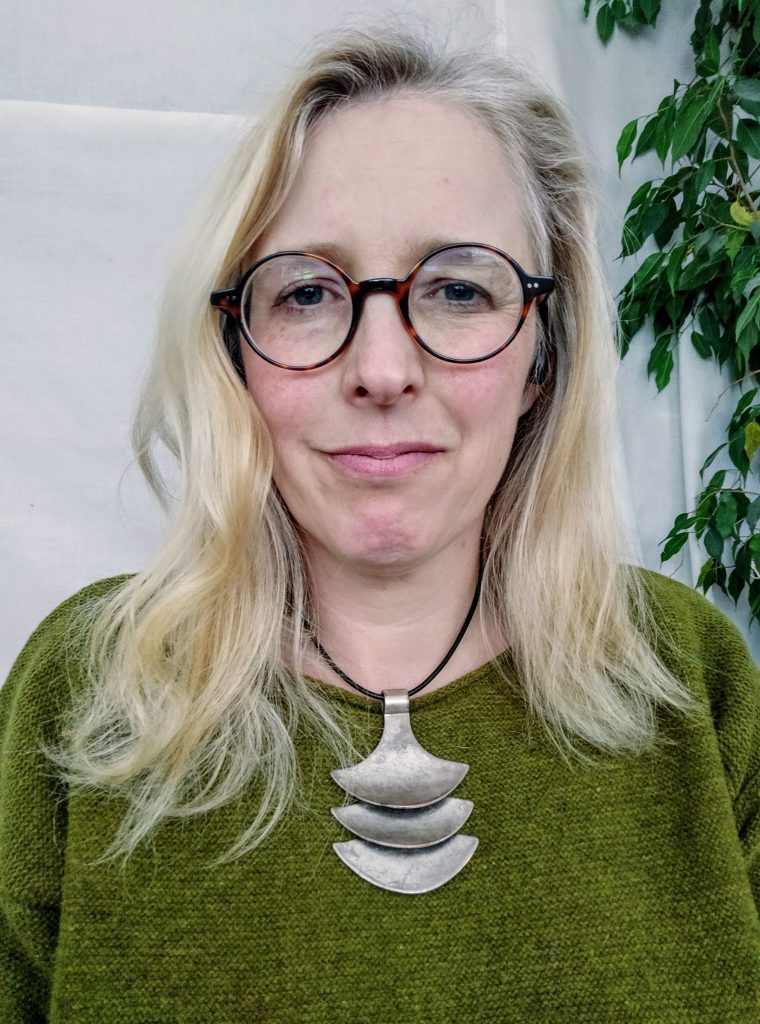 To begin, can you tell us about how you came to be interested in science?

For me, there was never really a question about going into science or not – I’ve always been interested in the natural world and my family was always very close to nature. We’d go mushroom hunting and blueberry picking, fossil hunting, hiking and biking, so I’ve always felt an affinity to the natural sciences and thought it was something I would go into.

I studied for my undergraduate degree in biology at the University of Münster, and then I briefly pursued a PhD in tropical biology focusing on the Ivory Coast, but a civil war broke out in my first field season which impacted safety and funding. So, I had to change tack and got a new PhD position in the Netherlands focusing on animal ecology. I did a postdoc at the University of Sheffield and then started my own research group at the Max Planck Institute for Ornithology. Since 2015 I’ve been at the Silwood Park campus of Imperial College London.

What are your main research interests?

My main interest is differences in behaviour – specifically social behaviours – which are really interesting traits because they can’t be measured in the conventional sense, the way we would measure height, length, wingspan etc. These traits are very clear and defined, but behaviours are much more complex and fuzzier, and it’s not always clear if we are measuring a trait in a biological, physiological or genetic sense. They can also only work in social groups – for example, we talk a lot about sexual selection and female choice, but females can only choose from the males that are available to them. They’re also defined with a bit of human perspective! I’m fascinated by how much of the differences between individuals are genetic, how much are environmental, and how they evolve or are maintained in the population. I also look at transgenerational effects, specifically parental age effects. How much of that is genetic and how much is a complex influence?

I work mostly on birds and my study species is the sparrow, which are almost the Drosophila of behavioural ecology for many different reasons. We know a lot about them, we can keep them in captivity, and they’re easy to study outdoors in the wild as they nest in breeding boxes and like to follow humans around. They’re also ubiquitous nearly all over the world and breed multiple times a year, which gives you a lot of data.

The sparrows you study live on Lundy Island, which looks beautiful! What field work does your research involve?

I did my PhD on black-tailed godwits, which are really beautiful birds, but it is hard to get good fitness data on them because they fly away and leave their nest boxes. For my postdoc, I deliberately moved to an island population on Lundy, which is a remote island in the Atlantic about 20km off the English coast: enough to stop the sparrows flying away. It’s almost a captive population in the wild, in a sense, and since 2000 we have captured every single bird that has bred on the island. All the birds have rings and are individually recognisable, and they almost exclusively breed in nest boxes, so we can fit all birds with rings and an RFID tag, which allows us to track and record them without needing to catch them. This gives us a ton of data to work with and an opportunity to investigate evolution in action.

I think a lot of scientists, myself included, really love field work, but I think we sometimes forget that field work is also disturbing wildlife. And I think because of that we have a moral obligation to look after our data really well, which can sometimes be difficult. We just put the data in an Excel spreadsheet and don’t really consider the obligation we have to the animals we are investigating. If I catch a bird, take some of its blood and fit it with rings and a tracking device then I can get a really intimate look of what that bird is doing, day in, day out. So, given the ethical implications, I don’t think it’s appropriate to write all this data down really sloppily so it can’t be read properly afterwards. Something I’ve put a lot of emphasis on ever since I started doing a PhD is that data recording, data management, and data storage do not have a sufficiently important place in science, even though they are all really crucial. It doesn’t matter what the duration of a study is: these data are being used downstream by other people after they’re published, so we need to take our responsibility towards data curation more seriously. And not just from an ethical standpoint: if we’re spending taxpayers money on fieldwork, we ought to put it to good use.

Moving on to preprints – how did you come to know about preprinting?

I think I’ve always been interested in how we can do better science. Like many people, I’m also frustrated by the current publishing system. I sit on panels and it’s impossible to read all the papers that people submit: if I have 30 people to look at who have each submitted five papers, I can’t read all of them in the three days I have to assess them. We do need a means of ranking contribution and impact, but I think this can be done in an easier (and better) way. I don’t actually know how I came to be involved with preprints early on – it just came naturally, and I think they’re a really good thing. And for lots of different reasons. I’m an editor for two journals, and it is so difficult to find reviewers, so there’s a bias from who is willing to review, and what career stage they are at. I’m not sure if a process that is open to bias always adds value over and above posting a preprint on a server, people reading it, and citing it if they think the science is good and useful. The publishing process is very slow, and we’ve seen with COVID-19 that putting science out quickly can help a great deal with giving us better access to relevant knowledge. Careers also develop at a much faster rate than the publishing process. I supervise a lot of master’s students, many of whom are really good, and we often aim to publish their thesis projects as papers in journals. At the point of being submitted to a journal, I also always encourage them to post the manuscript on a preprint server. Many of these students want to do a PhD, and they can’t afford to wait a year for a peer-reviewed paper to make up one line of their CV. A preprint is so much more powerful than writing ‘manuscript in preparation’ because that has so many meanings or interpretations. A preprint is a link, it’s a marker of quality work and science writing skills, so I think it makes students much more competitive.

How did you come to be involved with EcoEvoRxiv?

Firstly, I believe in preprint servers, so I said yes right away when I was approached because I think it’s an important thing to do. EcoEvoRxiv is struggling a little at the moment because we don’t have good funding. Some people prefer to just go to bioRxiv, but bioRxiv is so massive now and I think it’s important to have a preprint server for our field which might encourage more discussion. I wouldn’t go and scroll through bioRxiv, but I would scroll through EcoEvoRxiv, so I think we should fight to keep that.

You’ve also done work to highlight and address gender bias in academia. Why is that something you wanted to get involved with?

In terms of the first paper I published on this (Fewer invited talks by women in evolutionary biology symposia), I was a postdoc at a conference, when a woman I knew who was also attending commented ‘Oh, there’s another male invited speaker’. We sat down to tally it up and the representation of women as invited speakers was shocking. We reasoned that perhaps there weren’t enough women to be invited to speak, so we compared it to female senior authors at Nature and Science, and women in the top 10 departments in ecology and evolution. It turned out that women were massively under-represented at the conference as invited speakers, at a time when I was an early-career researcher, knowing that invited talks and seminars were crucial for CVs and grant applications. However, we learnt that in many instances, women were invited to speak, but declined. Anecdotally, we started to ask women why they had declined invitations and it was always – I can’t plan to be away, I have children, I can’t get childcare.

These are clearly structural problems that hold women back, so I felt it was important to publish about, but I was also very scared to actually do it as I was in such precarious employment at that point. But I like to think it initiated a bit of a change because shortly afterwards the same society who had organised the conference asked me to chair their Equal Opportunities committee. We were given a lot of funding, which we used to help women attending conferences pay for childcare. Not just paying for childcare at the conference, but a choice of how to spend that money – to pay to fly children to accompany the woman, or for a grandparent, who for academics often live in different countries, to fly in and babysit the children at home. Such flexibility is important because every family has different easy, and not every child can travel easily. The applications we got for money were truly heart-breaking – there were so many that said, ‘I can’t go because I need to look after my children because my husband works’ or ‘My husband goes to conferences, so I need to stay at home’. These women had really good CVs, so this very much remains a systemic problem.

Have you seen this improve over your career?

I am seeing changes, but the changes are not enough. Especially the higher you look, the worse it gets, especially with these systematic, partially unconscious biases. I do think outside academia it’s even worse because we tend to at least think about and reflect on our problems – and this is before we’ve even talked about representation of minorities, people from different communities or geographical representation. There’s a lot of work to do, which annoys me to be honest, because I’ve spent a lot of my work time on this when men can use that time for writing grants or publishing papers. That is upsetting because I feel like that exactly represents taking another step backwards just to make a step or two forwards.

On a happier note to finish! Is there anything fun or unexpected about you?

What people don’t know about me is that I was CEO of my own tour operating company, which was even successful. I think the experience I gained from that is very useful for project management, and also for the travel involved with field trips!