Mariana De Niz is our most active preLighter; she’s written an incredible 100(!) preLight posts and has participated in various other projects around preprints and preLights. Last year we caught up with Mariana to learn more about her scientific journey (read the interview). Mariana recently posted her own work on bioRxiv:

Here, she tells us more about this work and why she shared it as a preprint. 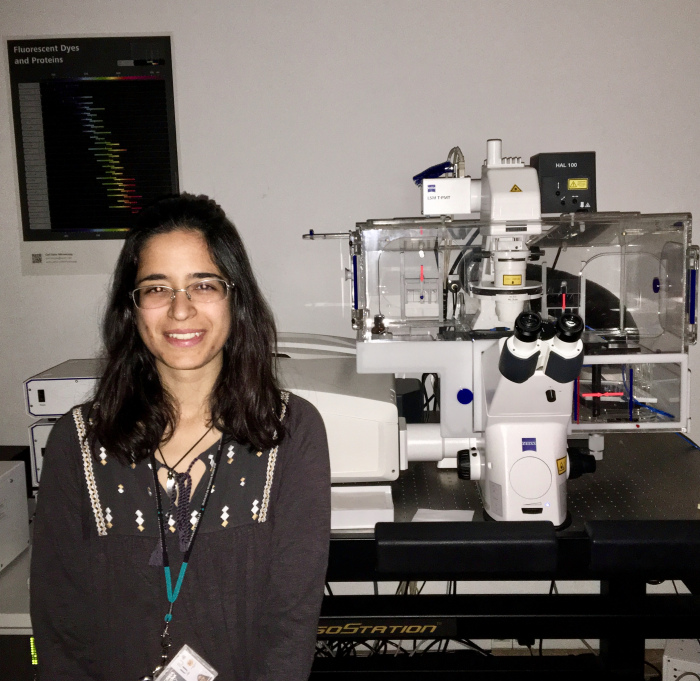 Could you explain the main findings of your work?

This preprint is the first of various pieces of work I have done during my postdoc in Lisbon, under a Human Frontier Science Programme postdoctoral fellowship. In my postdoc, my aim was to understand how the parasite Trypanosoma brucei (causative of a lethal disease known as sleeping sickness) uses specific networks, tissues and organs within the body to spread, how it interacts with barriers such as the blood vasculature to do so, and how it establishes tissue reservoirs. There are parasite and host components that shape this spread, and so this first study focuses on the mammalian vasculature-parasite interface. Various T. brucei extravascular reservoirs have been described including the skin, the brain and the adipose tissue. In this preprint, we began by using intravital microscopy to visualize T. brucei  across multiple organs. This tool allowed us to “spy on” these fascinating creatures in their own environment, to understand them better – so it’s a project I’ve enjoyed a lot.

We began by determining whether any other organs also serve as a reservoir, and we found that the pancreas is in fact heavily colonized throughout infection. This alone was something I found exciting – the pancreas is an interesting organ and this opens many questions for us to explore.

We described in significant detail how T. brucei seems to invade different organs at various times of infection: for instance, the liver and spleen are colonized early in infection- and heavily remodeled, prior to the establishment of the long-term reservoirs (the pancreas and adipose tissue). Late in infection- possibly linked to damaged vascular integrity, organs such as the lungs, the kidneys and the heart are also invaded albeit to a lesser extent than those we call reservoirs.

The way we tackled the question of “how are the reservoirs in the adipose tissue and pancreas established”, was by first determining whether there was anything particular about the vasculature of these organs that favoured parasite traversal. If, for instance, these organs are amongst the most heavily vascularized, this would increase the probability of parasite traversal. But this was not the case – in fact both the pancreas and the adipose tissue are among those with less vascular density amongst all the organs we studied. While investigating this part of the question, we found fascinating patterns of parasite distribution across the mammalian vasculature: in some organs parasites accumulate heavily in the vasculature, while in others not; in some organs the arterial vasculature is a main reservoir of parasites while in others it’s the venous vasculature, and yet in others it’s the capillaries that are enriched. While these patterns were exciting findings on their own, this still didn’t explain how the pancreas and adipose tissues become reservoirs. So we next explored if it was vascular permeability which allows parasite passage into these tissues. Say, if vascular integrity is damaged, anything in the vasculature would more easily leave the vessels and enter the organ parenchyma. But again, we found this was not the case: vascular permeability only increases after the reservoirs are established.

Again intravital microscopy gave us the next clue: we observed interesting and very heterogeneous behaviours of T. brucei while in the vasculature, which we begin to describe in this preprint. These behaviours made us think that perhaps there is something particular about the vascular endothelium of the adipose tissues and pancreas, that is the basis for tissue invasion. We began investigating endothelial receptors and found that some of them are upregulated in infection across different organs – open for exploration by the parasitology community! In this story, we focused on those upregulated in the adipose tissue and pancreas: E-selectin, ICAM2, and CD36. When we blocked these receptors, we saw indeed, reduced parasite load either in all organs (when blocking E- and P- selectin, and ICAM2), or preferentially in the adipose tissue (when blocking CD36). This was fascinating, as was the fact that parasitemia and overall virulence reduces significantly when parasite traversal is compromised.

This is of course very exciting, …but is only a small window into the fascinating world of host-parasite interactions, especially of such an interesting parasite- the fantastic swimmer, Trypanosoma brucei.

Why did you decide to post your work on bioRxiv?

In my PhD, I trained under a philosophy of open science- where the priority was to do good science, and to communicate it promptly to the scientific community. At the time bioRxiv and the idea of preprints were not in my radar, and I imagine also not in the radar of many parasitologists.

Since about 2017, I became very aware of preprints and ever more initiatives of open science, open review, open access, all with the aims of democratizing, improving, and accelerating scientific discovery. I am fully committed to this philosophy, which is why I have been part of groups such as preLights, ASAPBio, and others. I find it crucial to make the work available to others without months or years of delay, and I find it crucial that it is accessible to scientists of multiple fields of expertise, who can give ideas and constructive criticism to the work at any stage. I don’t think a piece published in a journal  is ever final either – there is always a follow-up question, and always more things that can be done. It’s part of the research process. I think of bioRxiv as an excellent platform for open knowledge distribution.

From a career point of view, everyone who contributed to this work, can already show to funding bodies, fellowships, or evaluating committees, what we have been working on for a long time. I think this is an important point many times unfortunately overlooked by overextended review processes.