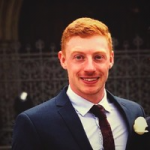 Contraction of the heart is initiated by electrical excitation which originates in pacemaker cells situated at the base of the heart. Propagation of the electrical signal from the sinoatrial node causes contraction of the atrium followed by the ventricle causing blood to be ejected from the ventricle into the bulbus arteriosus. The propagation of the electrical signal is orchestrated by opening and closing of voltage-gated ion channels which propagate the signal from cell to cell and chamber to chamber, passing from the atrium to the ventricle via the atrioventricular node. At critically high temperature, however, there is a breakdown of cardiac contraction which could originate in either the mechanism of electrical initiation or propagation. This article explores the latter and reveals the imbalance of rectifying K+ channels and depolarizing Na+ channels in the rainbow trout heart leads to atrioventricular block and loss of ventricular contraction in the presence of an atrial excitatory P wave.

The authors then looked at the cellular effects of high temperature in isolated ventricular myocytes and found that the resting membrane potential and the voltage-gated Na+ channel threshold potential had both become more negative, but that the change in resting membrane potential was greater, increasing critical depolarization required for reaching threshold potential. (Figure 2. A-F). Action potential amplitude was also increased at high temperature (25°C) whereas action potential duration 50 decreased and both overshoot potential and the maximum rates of AP depolarization (+ dV/dt) and repolarization (-dV/dt) remained the same. 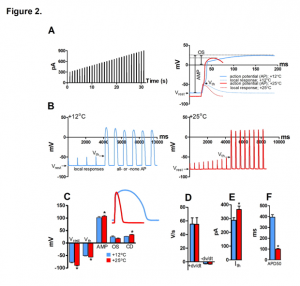 Also in isolated ventricular cardiomyocytes, the authors looked at input resistance (Rin), which is a measure of membrane leakiness. Rin was reduced more than 2-fold at 25°C compared to 12°C (528 ± 59 MΩ vs 253 ± 28 MΩ) indicating greater membrane leak at warmer temperatures resulting in increased charge requirement to trigger an action potential (Figure 3. A-B). Consequently, critical depolarization was significantly increased, as was the threshold current indicating reduced electrical excitation of ventricular myocytes at high temperature. 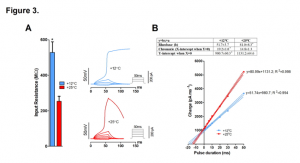 Finally, the authors looked specifically at the sodium current (INa) and the inward rectifier current (IK1) by patch-clamp experiments. The current-voltage relationship was determined for INa at 12 and 25°C and peak density was found to be 20% larger at 25°C (-70 ± 4 pA pF-1 vs. -56 ± 3 pA pF-1 at 12°C) but charge transfer was reduced by 31% (-40 ±2 pA ms-1 pF-1) at +25°C vs. (-58 ± 3 pA ms-1 pF-1) at +12°C (Figure 4. A-C). Charge transfer of INa started to decline immediately upon warming and reached its breakpoint temperature at 18.3 ± 0.6°C, whereas IK1 breakpoint temperature was 34.0 ± 1.1°C. As the charge transfer of INadeclines and the demand for charge increases due to diverging opposing currents INa and IK1, the temperature-dependent depression of electrical excitation becomes inevitable. This was previously hypothesized by Vornanen (2016) and termed the temperature-dependent depression of electrical excitability (TDEE). 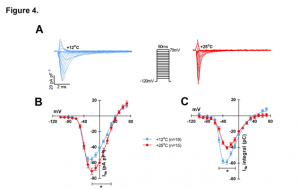 In conclusion, temperature-induced decay of ventricular excitation and contractility is due to atrioventricular block caused by a mismatch between depolarizing INa current and rectifier IK1 current. Increased excitation threshold due to increased membrane leak and increased threshold potential for depolarizing INa cause an increase in critical depolarization which is not met by the depolarizing stimulus, resulting in the non-propagation of the electrical signal, causing AV block.

Is the AV block caused by interruption of impulse propagation in the AV node or due to failure of ventricular tissue to relay the excitation stimulus?