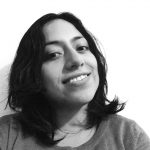 During Drosophila embryonic development, dorsal closure, i.e. the closure of an epidermal layer on amnioserosa cells, represents the last in a series of major morphogenetic changes (Jacinto et al. 2002). This morphogenetic event can be divided into three different stages depending on the dynamics of area reduction: early phase, slow phase, and fast phase (Figure 1C-D). During the early phase, the area of cells oscillates, but the tissue maintains its size. Subsequently, in the slow phase, the cells show oscillating apical constriction that gradually reduces the tissue area. Finally, in the fast phase, both the tissue and cells show persistent and rapid decreases in area.

Using exclusively mathematical modelling, Durney et al. replicate the dynamics of dorsal closure. Their model is able to account for autonomous cell oscillations and the transition through phases based on the dynamics of the PAR proteins and actomyosin.

Key findings
To model dorsal closure, the authors represented the amnioserosa tissue by a 2D vertex model in which a biochemical network is embedded and modelled as a set of differential equations (Figure 1A-B). The model is able to recover important aspects of dorsal closure from the dynamics of the PAR complex during the different phases:
Early phase: autonomous cell oscillations dominated by Myosin dynamics. Two types of negative feedback (Bazooka on aPKC and aPKC on actomyosin) are used in the model; these two types of feedback are used to demonstrate a cell-autonomous mechanism for the oscillation, with regulator “Ra” (an unknown but accounted regulator) playing a central role in the feedback mechanism.
Slow phase: ratcheting mechanism of cell area reduction. The model explains the actomyosin ratcheting by a finite availability of aPKC.
Fast phase: steady decrease in cell area without oscillations. In the model, the transition from the slow to the fast phase is triggered by the restriction of the availability of aPKC. The drop of aPKC relieves the negative feedback acting on Ra, thus promoting the assembly of Myosin and allowing the transition into the fast phase. The fast phase corresponds to the end of Myosin oscillations and instead a steady rise of Myosin translating into persistent contraction at a cellular and tissue level. 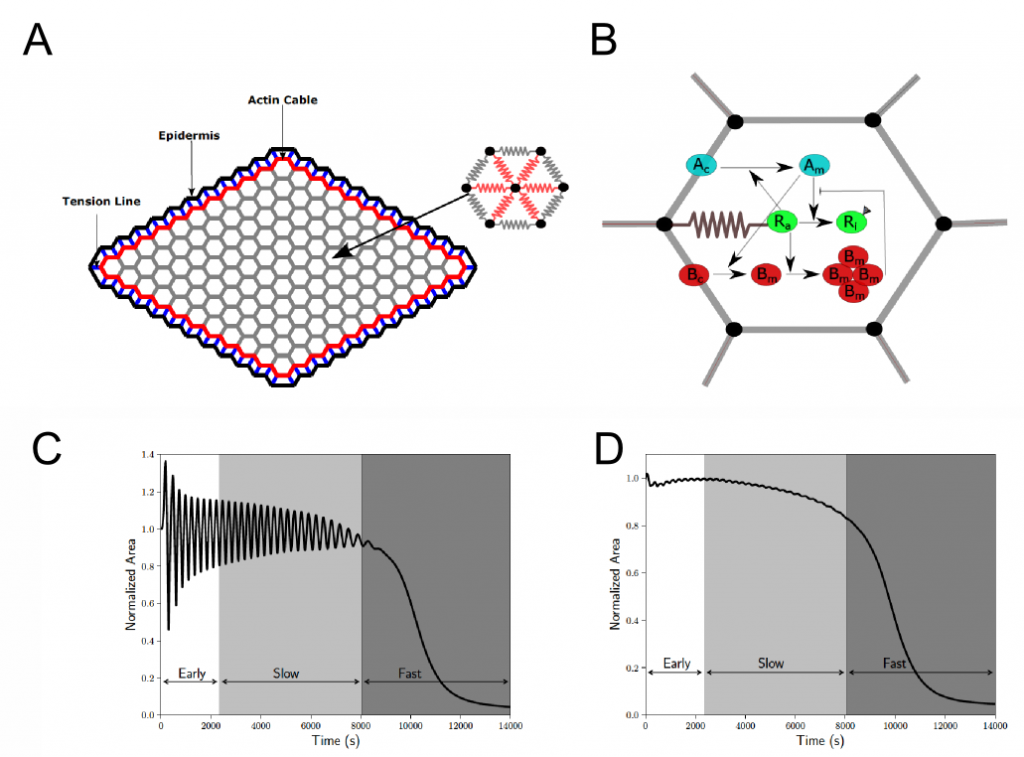 Figure 1. A) The amnioscerosa tissue is modelled as a grid of hexagonal cells. Each cell has 6 edges (grey) and 6 spokes (red) that respond elastically. The spokes also carry the active myosin force. B) Schematic summary of the biochemical network simulated in each cell (cyan: aPKC; green: a hypothetical Myosin regulator; red: Par3/Bazooka). C) Cell area dynamics of a single cell through different phases (early, slow and fast) of dorsal closure and D) tissue area dynamics. Panels A and B corresponds to Figure 1 of the preprint and panels C and D correspond to Figure 2 of the preprint.

What we like about this preprint and open questions

We found it very interesting that the authors were able to summarize in a predictive model the different dynamic features of dorsal closure (autonomous oscillations, ratcheting, and persistent contraction) using a set of differential equations based on a biochemical network.

The authors propose the existence of a factor “Ra” that links the kinetics of the Par proteins and the mechanics of actomyosin contraction. What might be the nature of this regulator? The authors proposed Rho kinase (Rok) as a candidate. Rok may indeed be a good candidate because it has been shown that phosphorylation by aPKC can remove it from the membrane (Ishiuchi and Takeichi, 2011) and Rok is able to phosphorylate Baz (Simões et al., 2010). However, to our knowledge, there are no reports on Rok recruiting aPKC from the cortex to the apico-medial domain.
Question: Which Myosin II regulator could recruit aPKC from the cortex to the apico-medial domain?

The model predicts that the available pool of aPKC is a crucial factor in regulating dorsal closure, thus changes in its levels will potentially lead to a change in the dynamics of the oscillations. An interesting experiment would be to modify the available levels of aPKC to experimentally validate this prediction. This could be achieved by overexpressing, knocking down (RNAi) and sequestering (trapping) of aPKC.
Question: According with the model, what effect could the changes in aPKC have in dorsal closure dynamics?

I’d like to discuss the 2 open questions you posed:

Question: “Which Myosin II regulator could recruit aPKC from the cortex
to the apico-medial domain?”

It is actomyosin that recruits aPKC, not Ra. This is clear from the
experiment of David et al. (12), and also stated in the preprint:

– “The actomyosin recruits aPKC from the circumference of the apical
surface toward the medial region” (p. 2)

– “aPKC is recruited by the actomyosin network” (p. 4)

Using the regulator Ra in place of myosin is a technical expedient. This
way, we can solve the differential equations (1-9) for the evolution of
all the proteins “ahead of time”, and then implement the same solution
into each individual cell as these equations are the same for each cell.
The myosin levels, in contrast, depend on the mechanical coupling and
thus differ among cells.

This labor-saving simplification does not affect the results in a
significant way. Figure 4a shows very close synchronization between the
temporal evolution of myosin and Ra. Therefore, roughly the same results
could be produced by either myosin or Ra as the recruiter of aPKC,
although the kinetic rate k1 would need to be adjusted accordingly.

The above should be explained in the paper, and I am glad you spotted
our oversight. We will add the explanation when revising the manuscript.

Question: According with the model, what effect could the changes in
aPKC have in dorsal closure dynamics?”

We have examined the effect of changing Ac in the Supplemental
Information (SI), Fig. S4. We will try to add these to the bioRxiv as well.

Finally thank you for your interest and effort in highlighting our work.