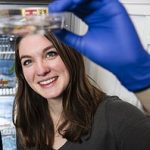 Mechanical injury poses a major threat to the integrity of tissues over the course of an organism’s lifetime. Mechanisms to repair tissue damage include scar formation, and in the case of some animals, stem-cell driven regeneration. In the highly regenerative planarian flatworm, mechanical injury induces the death of differentiated cells, while kick starting proliferation in stem cell populations. Being highly proliferative, stem cells are uniquely sensitive to radiation-induced DNA damage.

Shiroor et al. characterized the behavior of the planarian stem cell population, called neoblasts, upon mechanical injury. Surprisingly, they found that wounding an animal shortly after radiation protects stem cells from death. Specifically, cell death around neoblasts at a wound site allows them to survive lethal doses of radiation and contribute to regenerative growth.

In order to easily visualize stem cell behavior after injury, the group reduced their numbers by exposing flatworms to a low dose of radiation, a treatment that selectively kills stem cells. Surprisingly, they found that when worms were injured within 24 hours of irradiation, stem cells survived and accumulated at wound sites, regardless of the size or location of the wound.

How does tissue injury protect stem cells from radiation-induced death? The group hypothesized that signals from dying cells surrounding the wound site might promote survival in the neighboring stem cells. They exposed worms to agents that induced cell death, radiated the worms, and visualized stem cells. Amazingly, worms in which apoptosis had been induced, in the absence of injury, also had high numbers of surviving stem cells following radiation. This suggests that apoptosis alone is enough to rescue stem cells from death by radiation.

What specific signals from dying cells might be able to be received by neoblasts?

Are you able to see neoblast death (by TUNEL staining or another method) far away from a wound site following radiation? Do you predict the signals from dying cells to be long-distance?

I also liked this preprint ! Also nice prelight article.
It was recently published in Murcia et al., 2019 that Drosophila imaginal disc cells that activate RasV12 and Erk signaling are resistant to DNA damage induced cell death (like with radiation). I wonder if such pathways could also be activated in neoblasts. These are pathways also involved in stem cell proliferation and tissue regeneration if I am not mistaken and could be activated downstream of EGFR ligands. I wonder if the authors looked into this.