Henrichs et al. employ in vitro stepping assays with the kinesin-1 KIF5B and its adaptor TRAK1 to understand how they form a complex that transports mitochondria on crowded microtubules. 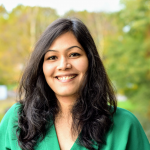 Motor proteins frequently encounter crowded environments in cells, which need to be traversed in order to ensure proper transport of cargoes, including organelles. While some motor proteins, such as cytoplasmic dynein 1, have the ability to switch to a neighbouring protofilament on the microtubule (Can et al., 2014) when faced with an obstacle, the plus-end directed kinesin-1 is notorious for its inability to remain moving on a crowded microtubule. How then is effective anterograde movement, such as that of mitochondria on neuronal microtubules, made possible?

In this work, Henrichs et al. provided evidence for a direct attachment of the kinesin-1 adaptor for mitochondrial trafficking, TRAK1 (Milton) to the microtubules. In the absence of the kinesin-1 motor, KIF5B, TRAK1 was observed to bind and diffuse on microtubules. This diffusional movement switched to processive plus-end directed movement upon addition of full-length KIF5B, illuminating a key role for TRAK1 in the activation of the motor. Further, analysis of the intensity histogram of TRAK1 spots that colocalized with processive KIF5B dimers indicated that at most two TRAK1 dimers were included in the transport complex.

By comparing with a constitutively active kinesin-1 mutant, KIF5BΔ, that lacked the autoinhibitory tail domain of KIF5B, but retained the ability to bind TRAK1, the authors demonstrated that the KIF5BΔ-TRAK1 complex had increased processivity (ability of the motor to take several steps on the microtubule before detachment) and interaction time with microtubules, than KIF5BΔ alone. The deletion of TRAK1’s microtubule binding domain (TRAK1Δ) abolished this increase, with KIF5BΔ-TRAK1Δ complexes exhibiting run lengths and interaction times similar to KIF5BΔ.

Next, the authors tested if the attachment of TRAK1 to KIF5BΔ was sufficient for the complex to achieve processive movement on the microtubule in crowded environments. First, a kinesin-1 rigor mutant was used, which binds tightly to microtubules due to its inability to hydrolyze ATP and therefore causes roadblocks on microtubules. The authors found that KIF5BΔ-TRAK1 had higher run lengths and interaction times on the microtubule that had roadblocks than KIF5BΔ alone. Then, the movement of KIF5BΔ-TRAK1 in the presence of cohesive tau islands on microtubules was monitored. While KIF5BΔ either detached at the boundary or moved only ~200nm into a tau island, only a small fraction of KIF5BΔ-TRAK1 detached at the boundary and the rest moved into the island for ~500nm before detaching from the microtubule. The latter was hypothesized to occur by sequential displacement of tau’s microtubule-binding repeats. Lastly, the authors extracted whole cell lysates from HEK293/T17 cells and added this to their in vitro stepping assay. Three different lysates were obtained: a native lysate, one from cells overexpressing TRAK1 and the last from cells overexpressing only the purification tag (halo lysate). Again, only the TRAK1 lysate exhibited processive movements on the microtubule.

While previous research has identified that TRAK1 binds mitochondria to kinesin-1 (e.g. (Brickley and Stephenson, 2011)), I like that this work provides clean evidence for the role of TRAK1 in regulating kinesin-1 activity. I also like the fact that the paper is very well written, and so can be read and understood by a non-expert without too much difficulty. The question of how motors overcome crowding on the microtubule has been long-standing in the field. The authors have combined several elegant methods to introduce crowding on the microtubule and have clearly shown TRAK1’s influence on the processivity of kinesin-1 in all instances. This work opens up the field to test how other motor proteins might cope with the issue of roadblocks on the microtubule.

Can, S., Dewitt, M. A. and Yildiz, A. (2014). Bidirectional helical motility of cytoplasmic dynein around microtubules. Elife 3,.

1)    Most of the experiments have been performed with the constitutively active KIF5BΔ mutant. Would you expect to see a similar behavior of full-length KIF5B when coupled with TRAK1?

2)    Do you see instances where a run is abrogated due to detachment of TRAK1 from full-length KIF5B, i.e. what are the kinetics of attachment and detachment between KIF5B and TRAK1?

Full length KIF5B is an autoinhibited protein that only sparsely interacts with microtubules. In complex with TRAK1, we observed activation of full length KIF5B and processive movements co-localizing with the TRAK1 signal. The movement of the KIF5B-TRAK1 transport complex along a microtubule stops when either TRAK1 dissociated from the transport complex or when the whole complex dissociates from the microtubule. However, as full length KIF5B itself is not able of robust processive movement, in both situations a sudden disappearance of the fluorescence signal would be observed. Hence, with our experimental setup it is not possible to differentiate between both scenarios.

3)    Would disabling the dimerization of TRAK1 have any effect on the transport complex?

To date we know that the transport complex consists of one KIF5B dimer transporting one TRAK1 dimer but experiments with a TRAK1-deletion mutant preventing dimerization were not performed. However, we speculate that a TRAK1 monomer binding to KIF5B might still increase the processivity as the microtubule-tethering would not be abolished completely. The effect on the velocity might be decreased as with only one microtubule-binding domain present in the TRAK1 monomer, the frictional drag of the transport complex would decrease.

4)    How does microtubule crowding affect mitochondrial transport by KIF5BΔ-TRAK1?

5)    Could you employ photobleaching experiments (similar to those used in Fig. S2) to ascertain that multiple KIF5BΔ-TRAK1 complexes transport mitochondria?

6)    Perhaps some questions for future work: (i) How do the KIF5B-TRAK1 complexes function in a tug-of-war situation with cytoplasmic dynein? (ii) How do differential post-translational modifications of tubulin alter the processivity of KIF5B-TRAK1?

i) TRAK1 is known to bind KIF5B as well as cytoplasmic dynein though whether TRAK1 can bind both motor proteins simultaneously remains enigmatic. Notwithstanding, KIF5B and dynein can bind through separate TRAK1 molecules to mitochondria and thereby potentially expose it to a tug-of-war situation. In vivo, mitochondrial transport is known to be interspersed with frequent pauses and directional switches, resembling the typical behavior of artificial cargo exposed to both opposite directed motor proteins in a tug-of-war. The reconstitution of mitochondrial transport in a tug-of-war situation in vitro is a highly fascinating matter worth studying in near future.

ii) We performed preliminary experiments with KIF5BΔ and/or TRAK1 on differently posttranslationally modified microtubules. While we clearly observed differences in the interaction and motility patterns in comparison to wild type microtubules polymerized from tubulin isolated from pig brain, we have to perform additional control experiments and collect more data to get a clear view on the influence of the differential post-translational modifications, the underlying mechanism and its biological implication.