Ndc80 and Ska: Shedding light on the molecular mechanisms of kinetochore-microtubule attachment and force-coupling in microtubule dynamicity

Background
The correct segregation of chromosomes from mother to daughter cells relies on dynamic chromosome-microtubule attachment. This event during cell division (mitosis or meiosis) enables separation of chromatids towards spindle poles and subsequently, the microtubule lattice. Kinetochores are structures which are comprised of a complex of proteins and are localized on the centromere. These act as binding sites for microtubule-chromosome attachment (1). Chromosome-microtubule binding primarily involves 2 steps: First, the kinetochore attaches to the lattice of the microtubule laterally causing the chromosome to lie horizontally. Second, the chromosome rotates and stands perpendicular to the microtubules, which is followed by end-on attachment of the plus ends of the microtubules to the kinetochores (2). This ultimately allows chromosomes to be pulled in opposite directions and get recruited to the respective cells via kinetochore-plus-end-attachment. This process is called “end-conversion” and is essential for cell survival as well as correct chromosomal configuration. However, so far, its mechanism is poorly understood.

Recent advances have revealed 2 complexes, Ndc80 and Ska, that could play major roles in the end-conversion process (3). Within the Ndc80 structure (Figures a and b), microtubule binding regions in Ndc80 include a globular structure formed by 2 calponin-homology domains towards the N-terminal, as well as a basic tail before the CH domain. Ndc80 is also docked onto the kinetochore via a C-terminal (SPC25 and SPC24) RWD domain (4)(5)(6).

Figure 1a) and b): Ndc80 forms the interface of kinetochore microtubule attachment. The Ndc80 structure involves 2 CH-domains and 2 RWD-domains.

The Ska complex has also been demonstrated to stabilize kinetochore-microtubule attachment. Similar to Ndc80 depletion, absence of Ska has also been shown to cause alignment defects, as well as weak kinetochore fibres (7). However, interestingly, the spindle assembly checkpoint (a cell cycle checkpoint) is activated upon Ska depletion while an opposite phenotype is observed for Ndc80 depletion (8). This difference could shed light on the mechanism of action of Ndc80 and Ska on kinetochores in relation to spindle assembly. Moreover, previous studies have shown that recruitment of Ska to the kinetochore requires Ndc80 (9).

In this preprint, the authors dissect the molecular mechanisms of Ndc80 and Ska in relation to microtubule end-on attachment with kinetochores and force-coupling.

Ska stabilization of end-on Ndc80-microtubule interactions is force-driven
Next, the authors asked whether force-coupling is influenced by Ska binding. This was approached by exposing both phosphorylated and unphosphorylated Ska to glass beads coated with trivalent Ndc80 in force experiments. The purpose of this is to assess association of both forms of Ska against the dynamicity of the microtubule lattice influenced by force-induction (Figure 2). 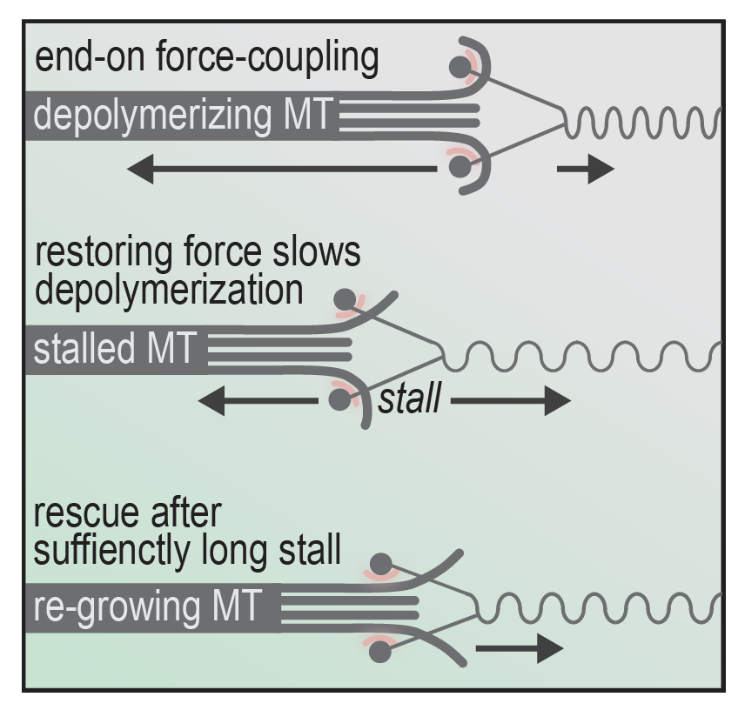 Figure 2: The mechanism of changing microtubule dynamics between depolymerization, stalling and re-growing leading to bi-orientation.

Specifically, stalling force was measured against duration of stalls with and without Ska in conjunction with different Ndc80-tail constructs (such as unphosphorylated and phosphorylated). The authors found that the presence of Ska significantly increased stall duration at the same force in pN, showing the ability of Ska to stabilize microtubules during force-induced stalling. This is interesting, as additional players independent of the kinetochore such as Ska can affect the dynamicity of microtubule growing and shrinking.

Why I like this preprint
Chromosome segregation in mitosis is heavily influenced by force-coupling mechanisms of microtubules, as well as dynamics of kinetochore-microtubule attachment. Cell cycle checkpoints are also regulated by environmental cues associated to these dynamics. Errors in such mechanisms can therefore result in detrimental effects on both chromosomal inheritance and cell survival. It is also intriguing to investigate the dynamics of kinetochore-microtubule attachment from a biophysical point of view, as this preprint partially questions the effect of force inflicted on microtubules by additional cargo which influences their motility, and the limit of this force that microtubules can undergo during chromosome attachment.

Questions
In light of the force experiment using glass beads, how reflective is this experimental design of the actual kinetochore-microtubule mechanism? Could there be other players within the kinetochore that also influence microtubule dynamicity that are not present in the experiment?