CRISPR-Cas13 is the new Cas9: A new and improved version of gene editing and expression manipulation

The ability to manipulate gene expression has unfolded from an option into an integral asset in modern molecular biology. Today, this is achieved with a repertoire of techniques that can be performed on a number of model organisms. Cleverly, these techniques mostly exploit existing machinery within defence and adaptive immune responses in both prokaryotes and eukaryotes, such as the CRISPR (clustered regularly interspaced short palindromic repeats)-cas9 system and RNA interference.

RNA interference in eukaryotes is triggered by the introduction of virus double-stranded RNA. This defensive response ultimately entails gene silencing which involves an Argonaut nuclease-containing RISC complex (RNA-inducible silencing complex) coupled with Dicer (a ribonuclease III enzyme) (1). Together, double-stranded RNA is recognised and cleaved into small-interfering RNA (siRNA) and the target gene on the mRNA transcript is silenced (1). In a similar fashion, the CRISPR-cas9 system in prokaryotes also functions as a response to invading virus DNA and RNA. The nuclease cas9 recognises target DNA using the CRISPR RNA array (crRNA) which encodes the guide RNA. The entire system consists of Cas genes and repetitive elements interspaced by variable sequences called protospacers (2). These protospacers are also associated with a short protospacer adjacent motif (PAM), which varies with the specific CRISPR system (3). Cas9 is thus encoded, associated with the guide RNA and subsequently directed by each unit of the crRNA with a 20-nucleotide base pair sequence via Watson-Crick base pairing (2), where the target DNA is cleaved.

Recently, a new genome-editing CRISPR-Cas13 system which acts on the mRNA level has been tested to focus efficiency and reduce off-target collateral effects. In this preprint, the authors describe this method to monitor vector competence in mosquitos by probing the expression of Cas13 from an engineered construct and, subsequently, its efficiency in silencing target genes.

Expression of the Cas13a construct

The authors first constructed a modified plasmid containing the Cas13a gene attached with a constitutive promoter and expressed transcripts were detected using RT-PCR. This was done by injecting the plasmid into the thorax of An. gambiae and Ae. aegypti mosquitos. In An. gambiae, RT-PCR of Cas13a and rpS5 (loading control) was carried out 3 days after injection on both mosquitos with and without the injection (Figure 1).

Gene silencing of Vitellogenin and COPI genes in An. gambiae and Ae. aegypti

Next, the authors tested the efficacy of gene silencing by Cas13a. The genes selected were Vitellogenin, a yolk protein precursor essential for oogenesis after blood feeding (4), and the COPI (coatomer complex I) gene, which encodes for proteins involved in blood digestion in Ae. aegypti (5). In An. gambiae, the Cas13a construct was introduced 3 days prior to blood meal-induced Vg expression. Vg proteins are found in developing oocytes during oogenesis. A control crRNA or Vg crRNA was then injected into the females 2 hours after feeding to induce Vg knockdown. The frequency of Vg transcripts was reflected in each group from the number of eggs produced, where this was reduced in those injected with the Vg crRNA (Figure 2). 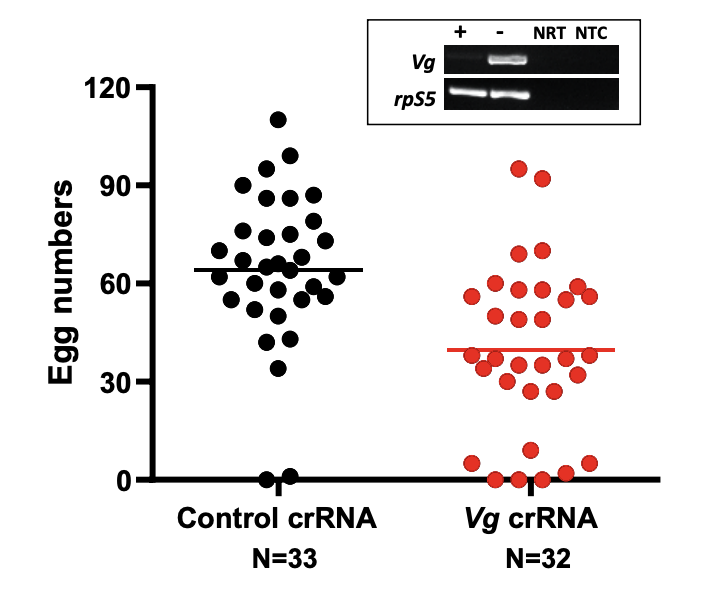 In mosquitos, each COPI protein subunit (7 in total) is encoded for by a separate COPI gene. Knockdown of the COPI genes leads to blood meal-induced mortality (5). In Ae. aegypti, silencing of the COPI genes was tested by injecting the Cas13a construct into the mosquitos, and a blood meal was given to them after 3 days. These were subsequently divided into 2 groups, one with the a and d COPI crRNAs injections and the other injected with control crRNA. To measure the efficacy of COPI gene knockdown in each group, survival over 9 days was measured as a phenotype of blood meal-induced mortality (Figure 3). 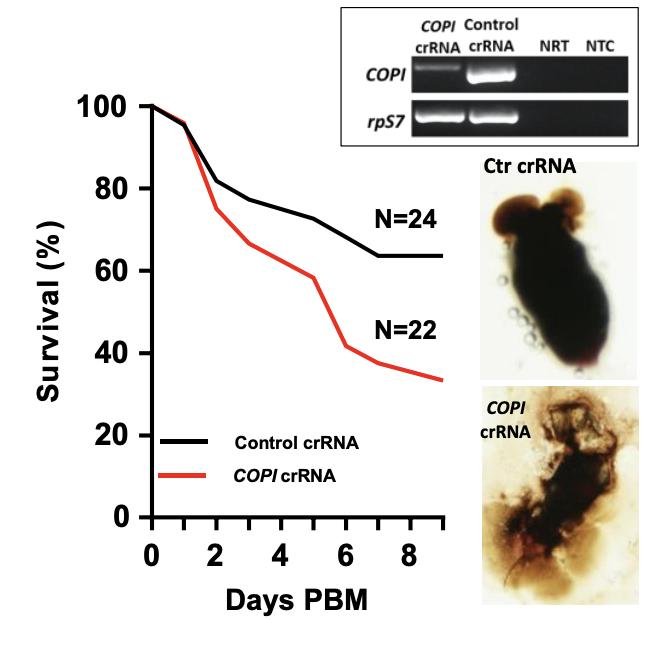 A reduction of COPI transcripts was observed in mosquitos injected with the COPI crRNA, which was reflected in their higher mortality rate compared to the control group. COPI transcript quantification was also verified with RT-PCR (Figure 3).

While various tools are already in use for the manipulation of gene expression, there are still drawbacks to existing techniques as the CRISPR-Cas9 system and RNAi. For example, the strategies in the RNAi method currently include using larger dsRNAs to trigger the RNAi machinery as a means to overcome the problem of unpredictability of siRNA sequences generated. This approach increases the probability of off-target collateral effects. Other studies carried out on Cas13a have not demonstrated the same type of non-specific promiscuity, although this remains contentious and further studies need to be carried out. Nonetheless, increasing the repertoire of gene-editing tools allows for higher specificity in these techniques, especially when different organisms are used.