TREx - a roaring success for visualising cells and tissues 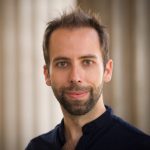 Microscopy is unarguably one of the most impactful tools for biology, allowing the observation of biological processes otherwise impossible to do with the naked eye. While light microscopy is a versatile and robust technique ubiquitous in biology, it is limited to resolutions of up to 200nm by the diffraction of light. Super-resolution methods for light microscopy allow researchers to go beyond this limit, managing resolutions down to single-digit nanometres. However, this fantastic achievement comes at a price, as they often require highly specialised training and complex, expensive equipment to do. The widespread use of this technology is therefore limited.

Expansion microscopy (ExM) is a relatively newly available tool capable of increasing the effective resolving capacity of any microscope via sample expansion without the need for specialised equipment. This expansion occurs using a swellable polymer gel that covalently binds the sample’s biomolecules in situ, later expanded by water inclusion. ExM is compatible with any microscope, opening new research avenues for laboratories not possessing more sophisticated microscopy equipment.

The hydrogel is formed within fixed cells and tissues by diffusing in monomers (e.g. acrylate and acrylamide) and crosslinkers (e.g. acryloyl-X SE (AcX)) that will bind amines of the sample proteins to the gel. This is followed by free-radical polymerisation using an initiator (e.g. ammonium persulfate (APS)) and an accelerator (e.g. tetramethylethylenediamine (TEMED)). The isotropy of this process is achieved by homogenising the sample, disrupting the complex protein networks with proteolysis via alkaline hydrolysis, proteolysis, and heat. These proteolysis processes can limit light imaging after sample treatment, as it can cleave, reduce the signal or simply washout fluorescent proteins and fluorescent labelled antibodies.

The original expansion process allowed expansions  up to 4-fold and was validated by direct comparison between pre-expansion and post-expansion imaging of the same sample. This increase in comparable size allows capturing structural features of the sample with great detail, reaching resolutions comparable with super-resolution techniques with the use of standard resolution light techniques.

Here, the authors provide an in-depth protocol to test different hydrogels for ExM. Additionally, the novel method they describe, TREx, is capable of a 10-fold expansion in both thick tissue sections and cell samples in a single step. TREx is fully compatible with antibodies and other structure stainings, providing an excellent platform for microscopy work.

Streamlined framework for synthesising dozens of gel recipes while characterising their mechanical properties.

The authors characterised 5 recipe families from A – E by varying different parameters, including temperature, crosslinker, acrylamide and acrylate concentrations (Fig.1 A).

Family A was generated from the original ExM recipe (Chen et al., 2015).

Family B consisted of a high monomer concentration mixture when compared to the original ExM (Chen et al, 2015) recipe to preserve centriole shape. It was adapted from the Ultra-ExM recipe (Gambarotto et al., 2019).

Family C uses the same high monomer concentration as B, with a reduction to the initiator to 1.5 ppt. When comparing B with A, the high monomer concentration requires a high concentration of initiators to trigger polymerisation, causing gels to form within minutes. Besides introducing potential experimental variability, given that polymerisation rates increase with temperature, it also introduces challenges when working with thick tissue section samples. Thick tissue slices require additional time for the gelation solution to diffuse throughout the sample before polymerising, requiring slower polymerisation rates.

Family E used an elevated gelation temperature, reaching 50 °C. This was done to increase the initiation rates, avoiding premature gelation during gelation solution diffusion. Expansion was higher than D at high concentrations but failed at lower ones.

Development of an ExM polymer capable of expanding 10-fold in a single step that is compatible with antibodies and small molecule stains.

Following comparison between recipe families, Family D was chosen as it displayed good mechanical performance and low polymerisation rates. The resulting method was named Ten-Fold Robust Expansion (TREx) microscopy. Family B was also considered as it presented the best mechanical performance, but the fast polymerisation rates made it incompatible with thick tissue samples.

TREx can be applied to both thick tissue and cell culture samples in a single step.

TREx was applied to mouse brain tissue slices stained with NHS ester dyes to visualise total protein distribution. Regularly, total protein staining would lead to dense microscopy data that is difficult to analyse due to the contrast between structures. In this case, fibre protrusion, the nucleus, nuclear envelope and several organelles were visualised using confocal microscopy. The nuclear envelope was particularly interesting, as heavily stained spots appear alongside the membrane, consistent with the distribution of nuclear pore complexes.

Antibodies against pre- and post-synaptic markers were used prior to the TREx protocol and imaged by light-sheet microscopy. Following expansion, visualisation of Bassoon, Homer and VGAT was possible at high density, maintaining a signal strong enough to allow capturing. Moreover, TREx allowed the preservation of specific antibody stainings while enabling imaging of large tissue sections.

Cell cultures of Jurkat T cells were also compatible with TREx, as the authors showed internal mitochondrial structures and membrane ruffling from the plasma membrane by using mCLING membrane stains. Previously, these structures could easily be resolved with electron microscopy, but doing so via ExM enabled assessment of complete cell monolayers, opening the possibility of automated segmentation of organelles in cells.

Epithelial monolayer cells such as Caco-2 presented a more complex subject to study with TREx. To do this, mCLING was used to resolve individual microvilli as hollow membrane protrusions. Cell-to-cell junctions were also identified, a feat that could only be clearly resolved using electron microscopy while allowing more versatility on how we render, label and visualise the samples.

Unexpanded cells usually require monomeric tubulin removal as an additional step to allow resolving the images, as they would be otherwise too densely packed to be visualised. However, this procedure destroys and alter cell membranes. On the other hand, cells expanded with TREx do not require such procedures as monomeric tubulin signal is diluted due to the expansion.

ExM does not require complex equipment but it can be difficult to implement, particularly because the polymers and techniques that offer the best expansion ratios often require several preparation steps. On the other hand, TREx allows a high 10-fold expansion ratio in a single step, allowing easier implementation across laboratories without previous experience with ExM.

TREx also allows the use of membrane, single and whole protein staining methods in the same step, simplifying the process and allowing the visualisation of patterns and details only previously obtained by EM.

When working with U2OS you decided to change the disruption step to use detergent and heat instead of proteinase K. Have you observed changes in the fluorescence intensity between these two disruption processes?

What do you think are still the major limitations of Expansion Microscopy, and what can we expect in the future?

Like any imaging modality, Expansion Microscopy is limited by the quality of antibody staining, which is highly dependent on the target, choice of antibody, and details of specimen preparation. There are already some examples of improving antibody staining by applying antibodies after expansion, likely because the expanded gel creates a more homogeneous environment with better antibody access when compared with unexpanded tissue. We think that there is more potential improvement in this area and expect to see more progress from the field in the coming months and years.

What supramolecular complexes, cellular structures or even tissues will be particularly interesting to observe with TRex?

We believe that the method is particularly suited to get better 3D information within cells and tissue, because the very strong increase in the z-resolution that it achieves is hard to obtain with many other super-resolution methods. Next to the models introduced in the manuscript – brain tissue, epithelial monolayers, Jurkat T cells and other single cell models, such as U2OS – we are particularly excited about the prospect of using TREx for cultured neurons and for patient-derived tissue mimics, such as organoids. For example, we are currently using it to better explore cytoskeletal organisation in hippocampal neurons. Furthermore, in collaboration with virologists we are applying it on human-derived airway cultures to examine the subcellular changes induced by SARS-CoV-2.