Clarice Hong is a graduate student in Barak Cohen’s lab at Washington University in St Louis, where she studies how cis-regulatory sequences work together to control gene expression. She has been an active preLighter since mid-2018, and has written ten preprint highlights so far covering various aspects of gene regulation. Clarice recently posted her first preprint from her PhD work:

We asked Clarice to tell us more about her discoveries and the reason they shared the study on bioRxiv. 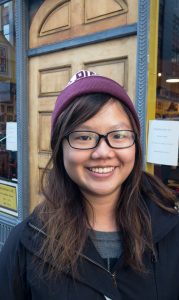 Could you explain the main findings of your work?

One model for how genomic environments interact with core promoters is that core promoters with different sequence elements respond specifically to distinct genomic environments containing different enhancers and chromatin features. For example, housekeeping and developmental core promoters have been shown to respond to distinct classes of enhancers and respond to distinct sets of proteins1–3. Core promoters containing either TATA or DPE motifs in the same genomic location in Drosophila have also been shown have different expression patterns because they respond to different enhancers4. To test this model, we measured the activity of hundreds of diverse core promoters at four locations in the genome using a genome-integrated massively parallel reporter assay (MPRA) that our lab had previously developed5. As a complementary experiment, we also measured the activity of six selected core promoters (three housekeeping and three developmental) in thousands of locations across the genome using the Thousands of Reporters Integrated in Parallel (TRIP) assay6.

Why did you decide to post your work on bioRxiv?

I believe that research is moving faster than the current publishing system. If we all waited for our papers to be published before releasing it to the community it would greatly slow down the pace of scientific discoveries. In fact, there was a recent preprint that had results that really agreed with what we found, it would have taken months for us to find out if we waited for the publication of the paper. I also think it is a great way to get feedback from the community quickly – after working on the project for so long I can no longer determine how interesting or useful my work is, but the response that I have seen on Twitter in the few days since it’s been out has been super encouraging for me! Lastly, I feel strongly about making research accessible and available to everyone, and bioRxiv is open-access and free for all 😊 I would encourage everyone to preprint their papers if possible!