7 things that shaped preLights in 2019

On the last day of the year (and in fact, the decade), we look back at some of the highlights of 2019 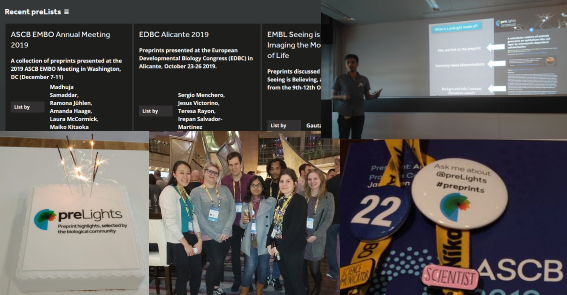 #2 At the end of February, we celebrated our first birthday and hosted guest preLights from our Directors and Editors from four journals.

#3 preLights got nominated for the ALPSP innovation in publishing awards, and although we didn’t win, we were happy to talk about our project alongside the three other finalists at the ALPSP conference.

#4 In September we reached 500 posts since our launch, and put some of the most active preLighters in the spotlight. Just in 2019, 314 preprint highlights were posted!

#6 This year over 40% of preLights posts featured an author’s response. We recently also started encouraging authors to comment on their peer review experience once their study is published in a journal, and have already received a number of insightful responses from authors.

# 7 We grew our community with 45 new early-career researchers this year. The preLighters’ activities went far beyond writing preprint highlights: they gave seminars and workshops about science communication, preprints and preLights, and participated in panel discussions. A part of the community also had the chance to meet up at conferences – where they proudly wore their preLighter badges!