Irepan Salvador-Martinez is a postdoctoral researcher in the Single Cell Genomics Team at the Centro Nacional de Análisis Genómico (CNAG-CRG) in Barcelona. He has been a preLighter since 2018, and since then has highlighted a number of preprints related to developmental biology and cell lineage tracing. His scientific career has seen him do a lot of globetrotting – from Mexico to Spain, the UK and Germany – and even Finland! We caught up with Irepan to learn more about his research, his experience with preprints and being part of the preLights community. 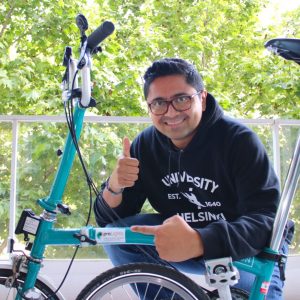 Proudly representing preLights (and the University of Helsinki!)

Back to the start – why did you choose to study biology?

I have to say, for me that was a very natural decision. I was a typical kid interested in nature, so I knew I wanted to study something related to that. For a while I wanted to be a vet, but then realised that I was actually more interested in studying animals than performing surgery on them, so I decided to study biology. My parents were very supportive of this –  I grew up in Durango in Northern Mexico, which doesn’t offer biology as a degree, and when I told them about my plans they just said, ‘Okay, then you need to go somewhere else!’. So I moved to Monterrey to study at the Autonomous University of Nuevo León (UANL).

And this eventually led to you moving to Barcelona for a master’s degree.

Actually, before that I went to Germany for a year, similar to an exchange student on the Erasmus programme, and this was a very important experience during my undergraduate degree. It was the first time I’d ever left the country; the first time I’d ever taken a plane! I ended up in the lab of Gregor Bucher in Göttingen, who works on the beetle Tribolium, and it was during this time that I first worked properly in a lab, instead of just doing a summer project. I felt confident that I could go somewhere else to study, so after finishing my degree in Mexico I moved to Barcelona for a master’s in Genetics and Developmental Biology at the University of Barcelona. And it was during my master’s, where I had a little project working on phylogenetics, that I actually started to think about doing bioinformatics and computational biology instead of wet lab work. And so for my PhD, I decided to make the leap to computational biology!

Tell me how you ended up in Helsinki for your PhD!

Well, there was some time in between my master’s and PhD when I went back to Mexico and worked in a small natural history museum. I really liked it, even though I knew it wasn’t my ‘job for life’. The kids were so curious and excited about everything and asked great questions, so it was very educational. It was a nice job to prepare for going back to do a PhD, and I always had the idea to go back to Barcelona because I’d met my partner Carol (now wife) during my master’s degree and we were in a very long-distance relationship.

So, I arrived back in Barcelona to start with my future supervisor, Isaac Salazar-Ciudad, but right at this time he got a position at the University of Helsinki, so he offered me a funded PhD if I went to Finland. It was a tough personal decision, but I was excited about the new adventure and the PhD project. Fortunately, the planes between Barcelona and Helsinki were quite frequent, and because I was fully computational now, I could spend time in Barcelona too. 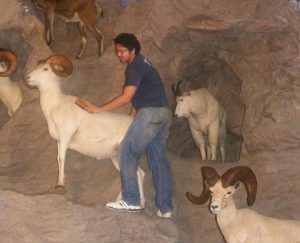 Irepan brushing the goats as part of his job at the natural history museum. As he says ‘we had to do everything!’.

Could you explain what you studied during your PhD? And what was your experience of living in Helsinki?

My supervisor and I knew we wanted to somehow analyse how complexity increases throughout development, and one idea we had for this was to analyse gene expression at the spatial level. Obviously, single cell data wasn’t around at that point! So I took publicly available in situ images of thousands of genes expressed over different developmental stages in Drosophila and other species, and overlapped them to identify different regions of gene expression in the embryo. In total, I analysed about 1200 genes over six time points (in Drosophila), looking at areas of expression, how complicated the expression pattern was, those sorts of things. It was really nice, because essentially, I was learning to code in order to analyse the data; all of us in the lab were biologists who didn’t know very much about programming, so we were learning together.

In terms of living in Helsinki, I really enjoyed the experience. Of course there were some culture shocks – many things were different from Mexico, or even Spain or Germany – but it’s a really easy city to live in. I lived close to the university and there was so much nature nearby too for walking and biking. There were meetings of the Finnish Society for Developmental Biology in a lovely research station, so overall it was a really nice place to be. And I was enthusiastic about learning Finnish until I realised how difficult it is!

What led you to your first postdoc?

A few weeks before my thesis defence I flew to London to interview with Max Telford at University College London – where I also met you! – and then went straight back to Spain the same day to prepare for my defence. And when I got the offer, again that was a big decision because we had our son Ruben at that point, so we had to move the whole family to the UK.

My postdoc was a Human Frontiers Science Program-funded project, so it was a collaboration between three different labs. It was an idea from Max and Michalis Averof to use the CRISPR-Cas9 system to induce mutations in Drosophila, and track these as a way of recording cell lineage. My part of the project was the computational side – analysis, running simulations to optimise the recorder and phylogenetic reconstruction of the lineage. For me, it was a wonderful experience. I was in constant communication with Michalis’s postdoc Marco Grillo, and it was a very nice feeling that everyone was open to the collaboration and really willing to do their part on the project.

That ethos ties in quite nicely to the idea of open science and preprints. Your experience with publishing one of the papers from this project was quite different too – could you explain that?

Yes, when we submitted the paper to eLife, who were running a publishing trial, whereby after the initial editorial decision was made to send the paper for review, eLife committed to publishing the work. We were able to decide how we would respond to reviewer comments, and the reviewer comments and our response were also published alongside the paper. We thought it was a nice experience to be part of the trial and see what came out of it.

In general, I think there’s a lot of time wasted when you send papers to journals and they get rejected, because when you send it to a new journal the core message of the paper is unlikely to change.

And did you find publishing your work as a preprint also helped you get comments for improvement?

The simulation paper that ended up in eLife was my first preprinting experience. It was a nice experience – we put it on bioRxiv and then we could relax! But then the next week we started getting emails from people working on something similar saying, ‘Oh this is a really interesting project, would you think you could do this with another type of recorder?’. It felt like such a difference to make it open to the whole community and to receive really nice feedback, but it was mostly gratifying to know that people were already trying to use the same approach in their projects.

Which leads us nicely to preLights! How did you find out about it and what inspired you to join?

I was reading the Node and saw that there was this new website called preLights trying to highlight cool new preprints, and that it was going to be run by a community of early-career researchers. I think from that moment I knew I wanted to be a part of this thing! I started to read preLights, and at some point I saw there was an opening for new preLighters and I applied and got accepted.

Has preLights been a positive experience for you?

I just really, really like the preLights community in general: we all do it because we like it, we’re excited about sharing ideas and sharing preprints, and the enthusiasm is contagious. preLights has really helped me with writing itself, too; I enjoy writing but I wasn’t necessarily the best at it, and the way to get your writing in shape is to keep writing and trying to get all the important information from a paper, so that’s a great exercise. I’d encourage anyone interested to apply, and be part of a community that’s excited about sharing science and making it open. It’s great.

You had positive feedback from readers when you posted a preprint. Do you find that the authors you contact for preLights also respond positively to your questions?

Yes, I think only once I didn’t get any response, but in most cases I get very rapid responses from the authors. I think they’re happy that we’re interested in their work and want to highlight it. For me, it’s one of the best parts of preLights: you can show your interest in the paper, get the opportunity to ask questions and have a conversation with them.

And to finish – anyone who was at the British Society for Developmental Biology (BSDB) 75th meeting might remember you cutting some shapes on the dancefloor! But is there anything else surprising about you?

Well I really do enjoy dancing – Latin dances, salsa, all those things! Maybe a surprising thing would be that although in my spare time I usually listen to rock music (progressive, metal, post-rock), but I mostly listen to classical music while working.