preLights as a teaching aid

If you’re a regular preLights reader, you might have seen a recent collection of posts published by groups of university students. Two courses, NYU Peer Review, for second-year graduate students, and Utrecht Protein Folding and Assembly, for final-year undergraduates, have used writing for preLights as a teaching tool for group-based critical analysis of preprints. Group preLights initiatives even caught the attention of Twitter, with bioRxiv co-founder Richard Sever tweeting about using preLights as an opportunity to teach about reading scientific papers critically. 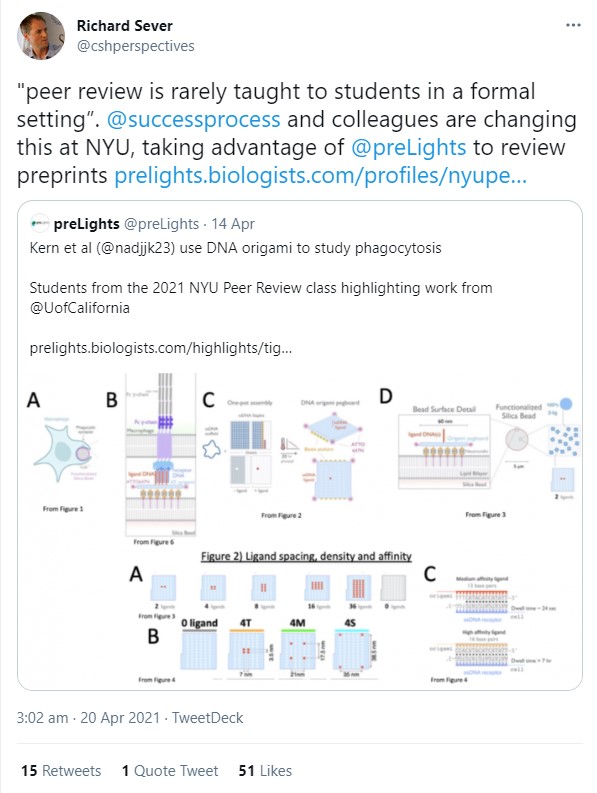 To learn more about their teaching initiatives and how preLights can aid in learning, we spoke with Gira Bhabha, one of the organisers of the NYU Peer Review course, and Tessa Sinnige, co-organiser of the Utrecht University Protein Folding and Assembly class. We also chatted with Juliana Ilmain, third-year graduate student at NYU, and Sanne Pikaar, who is in her final year at Utrecht University, to find out about their experience of being part of a course that focuses on writing preLights.

preLights was already a community that Tessa was involved with, having met Máté (the previous preLights Community Manager) during her postdoc at the Centre for Misfolding Diseases in Cambridge. The COVID-19 pandemic has impacted research in a number of different ways, but for university students, lockdown also meant a big change to how classes were taught. For Tessa, a new PI at Utrecht University, incorporating preLights into teaching was a pandemic-proofed alternative to a previously lab-based course. Along with the other course organiser, Stefan Rudiger, they decided to design a teaching program that emphasised writing and the critical reading of preprints as opposed to being in the lab. “Normally, the students wrote a research proposal, and then they had to go into the lab to actually carry out the research; obviously, that wasn’t possible anymore! And then I realised – we can ask them to write a group preprint critique instead as a writing task. We had the idea that we would post the preLight from the best group of students, but in the end all the students were so motivated and wrote such good preLights that we decided to post all six of them”, Tessa said.

For Gira, this year was the second time she had organised the Peer Review in the Life Sciences course at NYU in conjunction with co-organisers Damian Ekiert, Liam Holt and Timothee Lionnet. The inspiration for reviewing preprints in the course came from her awareness of the frequent absence of any formalised peer review training for graduate students. “Reviewing papers is so variable – I was involved in reviewing papers as a graduate student, but it could be that you’re reviewing something for the first time as faculty”, she said. “I thought it would be ideal for students to gain some experience of reading papers critically, and I wanted the main focus of the class to be on gaining practical skills like presenting and writing. The idea for including the preLights element came from my colleague David Schoppik. He thought it would be a good idea to include writing preLights as part of the course, and that’s when I decided to reach out”. Also important to Gira was teaching the students to think carefully about how they provided feedback. “We worked on the language used to construct the review and asked the students to keep in mind that on the other end there’s a first author who is a student or postdoc who has spent a huge amount of time putting the paper together”, she said.

The contents of the two courses are slightly different: the Protein Folding course has one main focus, so all the preprints chosen by the students are related to that topic. The Peer Review course has a broader scope, with modules in neuroscience, structural biology, biochemistry, cell biology, and either immunology or microbiology, depending on the year. Because of the diverse content of the Peer Review course, the preprints to study are chosen by the faculty teaching each module. “A lot of this class depends on which preprints are active, so we can’t set the syllabus 5 months ahead!”, said Gira.

What was central to both was encouraging the students to think critically about the content of the preprint and the context of the new research and write their post as a group. Students were also encouraged to contact the authors of the preprint with their questions themselves: something that was particularly rewarding for the course participants. “[the students] really value that the class is actually integrated with the scientific community. When we heard back from authors, or when people commented on the preLights, that was really good – for both the students and the faculty!”, said Gira. Similarly, students on the Protein Folding course enjoyed contacting the authors to ask for answers to their questions. “Writing to the authors became an additional part of the assignment”, said Tessa. “They had to design the email to the authors and most groups got a really nice response, which was very rewarding”.

For students on both courses, the response has been overwhelmingly positive. Sanne Pikaar, a final-year undergraduate at Utrecht University, described writing a preLights post in a group as “a really great assignment”. “The course was different from anything else you normally do; normally you write something and only your teacher sees it. For this, it’s going to be published online and other people can read it, so you’re more motivated than when you [work on a project] for the grades”. Juliana Ilmain, a third-year graduate student, who took the Peer Review course in the second year of her PhD and now assists in teaching it, feels the same. “The course was super discussion based, and that was the great part of it. It was super interactive, and the discussions were led by what the students felt was interesting or needed to be improved in the preprints”.

Being guided through the critical reading of preprints is also something with a long-term benefit for early-career researchers. “This was definitely one of the most applicable courses I’ve taken in grad school. Now, I can read papers and look critically at the figures and the data. I think everyone came out of the course looking at papers differently”, said Juliana. Similarly, introducing preprints to students can have a positive influence on the way students find or communicate new research in the future. “I like the fact that preprinting is more open”, said Sanne. “People can comment and highlight your research, and it’s nice to be part of a group of researchers and a [wider] community. I’d definitely consider preprinting in the future”.

For any course instructor thinking of introducing preLights or preprint discussion into their teaching, writing preLights seems to be a very well-received option. “For a while we were completely stuck!”, Tessa ended the interview by saying. “Thanks for giving me the inspiration to do this”.