Macrophages in the spotlight: resolving chronic pain by extracellular-vesicle mediated transfer of mitochondria to sensory neurons.

Inflammation is the physiological response of body tissues to mechanical stress and infection and is characterized by the rapid infiltration of immune cells to the site of damage and the local release of a variety of molecular mediators which are beneficial to proper repair and healing. The release of these mediators is often associated with the stimulation of nociceptors and evokes a sharp feeling of pain which protects the site of injury from further damage. Normally, inflammatory pain fades away once the tissue is properly healed. However, there are patients who develop the so-called chronic pain syndrome (CPS), whereby the pain persists far beyond the normal time of recovery becoming in fact chronic. This condition affects 8% of young people between the age of 13 and 18 and 10% of the adult population and represents a serious public health issue that greatly reduces everyday quality of life.

The preprint in pills:

The preprint highlights a previously uncharacterized role for macrophages in actively promoting the resolution of inflammatory pain and hyperalgesia by transferring mitochondria to sensory neurons through the release of extracellular vesicles (EVs). Authors provide molecular insight into this process, showing how transfer of EVs between these cell types requires the interaction between the CD200 receptor on the surface of macrophages and the non-canonical ligand iSec1 on the surface of sensory neurons (Figure 1). 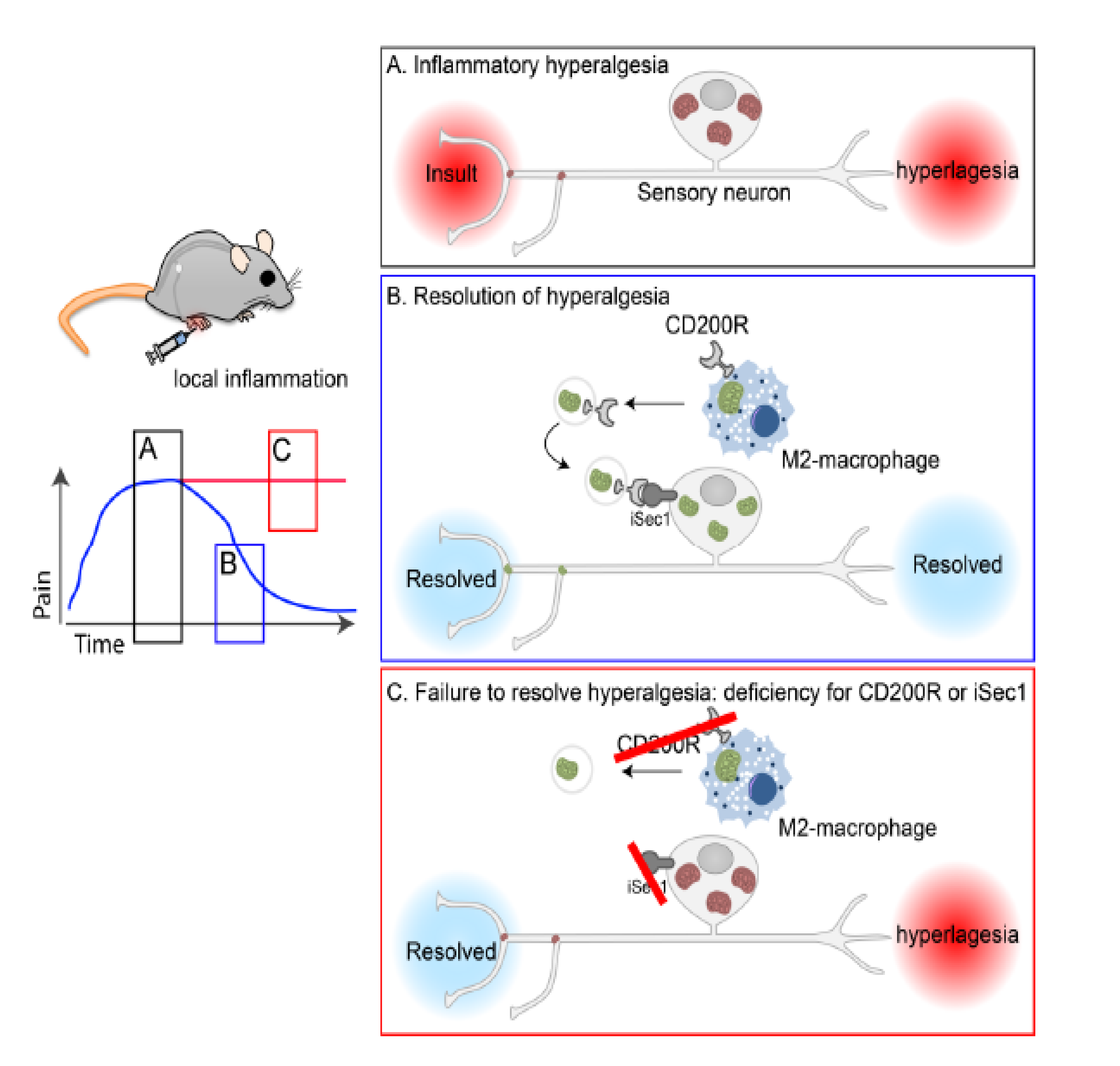 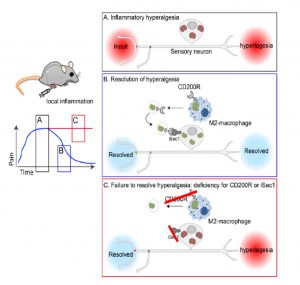 In this preprint the authors investigated the role of the immune system in the resolution of inflammatory pain using carrageenan-injected mice as working model. Injection of carrageenan in the hind paw triggered an inflammatory response characterized by marked infiltration of macrophages. Macrophage number reached a peak within 3 days post-treatment to then return to baseline levels in concomitance with the resolution of inflammatory pain. Furthermore, MMdtr mice depleted of monocytes and macrophages, mounted a robust, long-lasting hyperalgesia which was solved only upon bone marrow transplantation, reinforcing the idea that localized activity of macrophages was crucial to resolving inflammatory pain.

How does this transfer take place? Flow cytometry-based analysis revealed that macrophages released extracellular vesicles (EVs) of different sizes which stained positive for mitochondria-fluorescent dyes, suggesting they carry mitochondria. In addition, injection of mitochondria-bearing vesicles was sufficient to solve inflammatory pain. Finally, the authors uncovered the basic molecular machinery required for the docking of the vesicles on the surface of the sensory neurons. Transferring of the vesicle content relied on the expression of the CD200 receptor (CD200R) on the surface of macrophages (and therefore of the EVs budding off from their surface) and the expression of the non-canonical CD200R ligand, iSec1 on the surface of sensory neurons. In fact, either knockout of CD200R or RNAi-mediated downregulation of iSec1 in neurons significantly compromised mitochondria transfer and therefore the resolution of inflammatory pain. Finally, expression of an RNAi-resistant iSec in sensory neurons of iSec1-RNAi, CD200-null mice completely restored the ability of these animals to solve pain.

The data presented in this preprint uncover in vivo a novel role for macrophages in the resolution of inflammatory pain which is achieved by transferring mitochondria to sensory neurons via EV release. This work has important implications for the development of novel therapies to resolve inflammatory pain which might either aim to restore the functional pool of mitochondria or boosting the transferring of mitochondria from macrophages.