Pull the strings on the expression of multiple proteins, with “Marionette” – using 12 inducible promotors in a single E. coli strain. 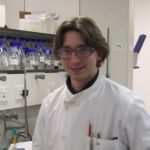 Expression of proteins in cells can be controlled using inducible promoters, in which addition of a small molecule inducer alters the expression – ideally from nothing, through low levels, to high expression as the inducer concertation is varied. However not all inducible systems show this control and they often interfere with each other. In this paper, the authors demonstrate the successful combination of 12 small-molecule-sensing genetic elements in a single E. coli strain. In order to achieve the robustness needed for this, the authors applied extensive engineering efforts. This included negative selection, against a toxic protein to prevent expression when not switched on, and positive selection, based on the expression of DNA polymerase. Random and targeted modifications finally allowed the combination of 12 of these optimised inducible systems into a single strain, which the authors named “Marionette”. This was then exhaustively assayed through expression of YFP to confirm the limited cross talk between systems, high dynamic range with expression varying with inducer concentration, and lack of expression when no inducer was present.

Only at the end do we finally learn the reason for the authors choice of strain name – “now, pulling the strings on Marionette enables unprecedented genetic control.” I would like to see this system demonstrated to work with more than one reporter gene that is expressed from the same construct. This would confirm how separate their expression levels are; overall, this work looks like a very useful tool for expressing multiple proteins at different levels from a single construct.

With this work, a single bacterial construct can be built, able to express up to a dozen different proteins. The Marionette system can then be used to control the expression levels of each of these in multiple parallel experiments through the combination of different small molecules that control the regulatory elements of the construct. This could help to determine the role of proteins in natural systems, by expressing different amounts of proteins that make up a larger complex. Excitingly for me, this would allow the optimisation of the stoichiometry of the components of a metabolic pathway, without making dozens of different constructs and transformants.

Thanks for the fantastic write up! In response to a comment in your overview, I have used Marionette-Wild to control the expression of fives enzymes involved in lycopene biosynthesis (dxs, idi, crtE, crtB, crtI) using five inducers (OC6, aTc, Cuma, IPTG, DAPG). I was able to quickly (about a week) test hundreds of different induction conditions (different concentrations of each inducer) and determine the optimal expression level for each of the five enzymes.

I’m very excited to see what the community is able to do with Marionette. We’ve already had several requests for the strains (they are available through Addgene). I’m particularly interested in controlling the timing of the expression of each enzyme in a biosynthetic pathway. If a promiscuous enzyme can act upon several intermediates, it can create wasteful or toxic side-products. If that enzyme is not expressed until its preferred substrate is available, hopefully it will get into less mischief.

Thanks for your comments – the timing sounds a particularly interesting use. I can imagine expressing a set of enzymes later in a pathway before allowing the first steps, to make sure there is no build up of intermediates.

Thanks for your comments – the timing sounds a particularly interesting use. I can imagine expressing a set of enzymes later in a pathway before allowing the first steps, to make sure there is no build up of intermediates.