The pioneers of pluripotency: Sox3/Pou5f3 unlock the chromatin for Xenopus ZGA 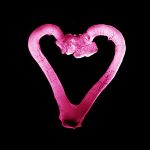 How does a limited signaling toolkit encode the multitude of diverse outcomes required for development? Cells respond in a variety of ways to the same signal depending on which DNA regions are accessible to signaling mediators. Here, the authors show that the maternal transcription factors Pou5f3 and Sox3 remodel the chromatin landscape during zygotic genome activation (ZGA) in Xenopus. Sox and Pou factors are also implicated in zebrafish and mouse ZGA, emphasizing their conserved critical role in reprogramming and pluripotency.

We like the logical systematic approach taken in this work. By cross comparing binding site enrichment at genes activated during ZGA and proteomics data on oocytes, Gentsch and colleagues identify a shortlist of candidate regulators of this process that they can functionally test.

They find that the maternally provided transcription factors Pou5f3 and Sox3 facilitate the expression of a subset of genes at ZGA. Sox/PouV act as ‘pioneer factors’, binding to closed chromatin and are required for enhancer priming; increased chromatin accessibility, chromatin remodeling and enhancer-promoter interactions. Sox/PouV primed enhancers are competent for transcriptional activation of target genes in response to signaling cues at gastrulation. However, the pioneering activity of Sox/PouV is context specific, presumably dependent on the presence of differentially expressed binding partners expressed at various developmental stages and tissues.

What makes a transcription factor a “pioneer” and what regulates its specificity?

How do pioneer factors interact with one another and is this context dependent?

While the opening of silenced chromatin by defined pioneer factor cocktails may improve reprogramming or transdifferentiation, are parallel methods needed to shut down the active somatic cell genes and avoid ‘confused’ cell types? 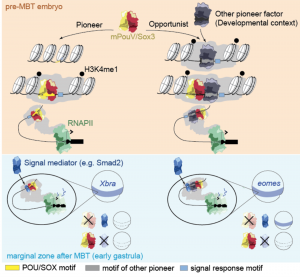 Model of pioneer-initiated chromatin remodelling 282 to facilitate the transcriptional response to signals during ZGA (Taken from Gentsch et al., 2018).

Does the degradation of maternal pioneer factors provide a time-critical window of a poised chromatin landscape that can competently respond to signaling cues?

Cells continue to respond to the same signals beyond the maternal influence. However, early signal-dependent cell trajectories of the three germ layers very much depend on maternal pioneer factors. Later, zygotically expressed pioneer factors further specify cell fate decisions to generate the many derivatives of the germ layers.

Here you focused here on the role of Sox3/PouV, but noted a correlation of other maternal factors with the binding sites of genes activated during ZGA. Do you think that there is a master upstream pioneer factor during ZGA that acts to recruit the other factors and increase chromatin accessibility or this is a synchronised team effort?

Based on our results in Xenopus, this is an orchestrated effort of several maternal transcription factor families and they initiate the accessibility of specific DNA regulatory sequences by recognizing canonical DNA recognition motifs in nucleosomes. It appears that the chromatin accessibility and thus the operation of an early cell fate-specific gene regulatory network is frequently encoded by the SOX/POU motifs in enhancers.

Do you have an insight into whether Sox3 and PouV physically interact during Xenopus ZGA, does one recruit the other or do they both bind to the same sites but independently?

First, Sox3 and Pou5f3 are detected in the same nuclei of the early embryo. Second, they share a synergistic relationship in regulating ZGA. Third, their canonical binding sites are often detected as pairs suggesting heterodimerization between Sox3 and Pou5f3. Although we do not provide direct evidence of dimerization previous EMSA experiments have shown that Sox2 and Pou5f1 (Oct4) can simultaneously occupy the SOX/POU motif.

Does PouV/Sox directly recruit signaling effectors or indirectly through chromatin remodeling and creating favorable binding environment in their vicinity?

We do not know the answer to this question, which is the subject of current research. Based on our working model, direct interaction between Pou5f3 or Sox3 and signal mediators may not be required. However, it seems that signal mediators have poor pioneering activity and thus rely on the precedent opening of compacted chromatin by other DNA sequence-specific factors.

Opportunistic (non-specific to DNA sequence) binding of pioneer factors seems to have minor effects on transcription. However, potent transcription factors like MyoD do interfere with any other (non-muscle) reprogramming attempts. Thus, MyoD requires silencing to induce SoxB1/Pou5F-dependent pluripotency. Some combinations of counteracting pioneer factors are normally transiently detected in cells of multi-lineage priming, i.e. cells giving rise to opposite cell fates.