Removing the Notch: a coordinated effort of Par-3 and Dynein drives the asymmetric segregation of Delta-enriched endosomes.

Asymmetric cell division (ACD) is essential for the development of multicellular organisms and is a strategy utilized to generate cell diversity. This specialized mode of cell division is characteristic of stem cells which, at each cell cycle, divide to self-renew and to generate a daughter fully committed to differentiation. To allow ACD, cells establish apical-basal polarity axis through the assembly of cortical domains which ultimately facilitate the differential distribution of fate determinants at each division. Neurogenesis is extensively used as a model to explore mechanism(s) of ACD in many organisms and to uncover signaling pathways involved in the generation of fate diversity. A growing body of evidence in Drosophila as well as vertebrate models, point to a function for Notch in promoting cell fate switch upon ACD, with the cell receiving low Notch activity committed to differentiation while the one maintaining high level of Notch which keeps traits of stemness. However, how polarity proteins control segregation of Notch signaling components and where the interaction between polarity proteins (Par) and Notch take place is still unclear. In this preprint, the authors explore these questions using the zebrafish radial glia progenitors (RGPs) as working model.

The authors investigated how the polarity protein Par-3 contributes to the asymmetric distribution of Notch signaling in RGP cells. To study how this asymmetry arose, they performed an antibody uptake assay to visualize internalization and distribution of the Notch ligand Delta (Dld) during ACD (Figure 1). This in vivo analysis revealed that Dld is internalized in endosomes (Dld endosomes) which firstly converged towards the metaphase plate and afterwards towards the cleavage furrow during anaphase. At telophase, the Notch signaling endosomes are transported towards the posterior daughter cell where they accumulated. This movement of Notch endosomes to a more posterior location relied on the coordinated activity of the minus-end directed motor Dynein and a transient cytosolic pool of Par-3. This small pool of cytosolic Par-3 started to be detectable in the posterior daughter cell at anaphase and co-localized with Dynein in close proximity of Notch endosomes, as shown by label-retention expansion microscopy. In addition, removal of Par-3 caused a significant decreased in the co-localization of Dynein to Notch endosomes, suggesting that the polarity protein works as a scaffold that connects the Dld endosomes to the motor protein. This sophisticated strategy resulted in the accumulation of Dld endosomes and Notch receptors in the posterior daughter cell which, as a result of the activation of the Notch pathway, would eventually differentiate in neurons (Figure 1). 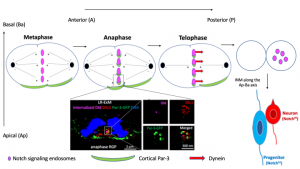 Figure 1: Schematic representation summarizing the main findings of the study. Endosomes enriched in the Notch ligand Delta and its receptor (in magenta) congregate to the cleavage furrow during metaphase and anaphase and move towards the posterior daughter cell at telophase in a Par-3 (in green) and Dynein (red arrow) dependent fashion. Co-localization of cytosolic Par-3 and Dynein at Dld endosomes could be visualized by label-retention expansion microscopy (image adopted from the preprint). The posterior daughter cell enriched in Dld endosomes move towards a more basal position upon completion of ACD, in a process known as Interkinetic Nuclear Migration (INM). Ultimately, high levels of Notch activation drive differentiation.