Blood sisters: vampire bats leave the roost alone but meet up with preferred roostmates to forage. 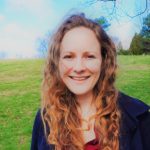 Access to food is a crucial benefit of cooperative relationships in group-living animals, ranging from birds to chimpanzees. Over the last few decades, the common vampire bat (Desmodus rotundus) has become a classic example of cooperation and reciprocal food-sharing – bats who fail to feed on a given night are provided for by other bats via regurgitation of blood meals. This food-sharing is based on social bonds formed through grooming in the roost and is not always driven by relatedness. Although we have detailed evidence of interactions and bond formation between roostmates, less is known about the impact of these relationships on activity outside the roost, i.e. bats’ nightly foraging behaviour. The authors of this work aimed to distinguish between six competing hypotheses regarding vampire bat foraging behaviour (Figure 1). They include the possibilities that socially bonded roostmates either prefer to or avoid feeding together, or that prior social association has no effect on foraging encounters.

A historical lack of data on foraging encounters is partly for practical reasons: it is technically challenging to track individual free-ranging bats. The authors chose to use custom-made proximity sensors, allowing them to continuously track 50 bats over several nights and observe both inside roosting associations and outside foraging encounters on herded cattle. Kinship estimates were calculated for all bats studied and used as predictors in the analysis of foraging encounters. Of the 50 bats tagged, 23 had previously been in captivity, and data on their food-sharing and social grooming interactions in captivity were also used as predictor variables for foraging behaviour. 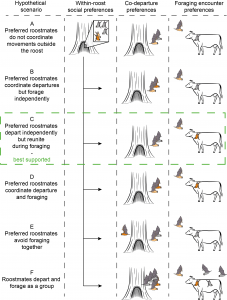 Figure 1 (from preprint). Hypothetical scenarios for the association between within-roost relationships and foraging behaviour. Preferred roostmates are shown as pairs of light brown and dark brown bats.

The authors of the study tracked 50 individual vampire bats over several days and nights, aiming to reveal the relationship between social networks in the roost and foraging behaviour at night. In other words: which roostmates forage together, if any?

I was initially intrigued by this paper because of my interests in animal foraging and the evolution of social behaviour. Tracking individual bats, and indeed many free-ranging animals, has been historically challenging, and I thought the approach here was well-suited to answering the research questions. I really liked the clear explanation and figure demonstrating alternative hypotheses for foraging associations between roostmates. I was especially intrigued by the discovery of a new type of call and I am curious about the role it plays in roostmate communication and foraging. Overall, the paper provides interesting findings on the social structure and foraging behaviour of vampire bats, with implications for the evolution of cooperation in these animals.

Gerald Carter:  Great questions. We don’t know yet. I would guess that the bats could distinguish between slightly familiar and completely unfamiliar individuals, both by sound (calls) and scent. What we might label as “non-preferred roostmates” might actually be weak social preferences that are still greater than zero. For example, we humans have close friends, friends, associates, people we recognize but don’t know their names, and then… complete strangers. I am still more interested in interacting with someone I’ve seen repeatedly compared to a complete stranger. I would love to know if vampire bats have this same continuous spectrum of social familiarity. That’s a big question.

Simon Ripperger: In addition, it might be interesting to find out whether there is a cognitive limitation to distinguishing between conspecifics and whether this is somehow a challenging factor in respect to global change. How many unrelated individuals can a single bat distinguish and remember? I would assume that the average colony size in a mature rainforest is quite small (maybe 10 or 20? I actually don’t know but I have seen quite small colonies in areas without cattle). In the area where we work, a single tree or roost may host hundreds or more individuals because the food availability is basically unlimited in the presence of large herds of cattle. One may ask ‘where is the limit’? I would certainly believe that a bat that lives in a roost with another 10 bats can easily distinguish those from unfamiliar bats. However, in a roost with 300 conspecifics – I doubt it…it is actually quite likely that the colony we’ve been working on is not a single social group but several social units. This is actually one aspect of our ongoing research: What are the social dynamics within a single roost?

GC: We have not found any physical traits (besides sex) that predict gregariousness or cooperativeness, however, we are currently looking at oxytocin receptor densities in the brain as one possible predictor.

SR: Another aspect of these automatically sensed social networks is that we collect data on associations, not on interactions. Apart from individual differences in hormone levels as mentioned by Gerry, we could also think of differences in activity levels or the degree of exploratory behavior. There might be individuals that move around more frequently within the roost or some individuals might be more curious and therefore more likely to approach others. That would not necessarily mean that those are more social or gregarious but in an association network, they would still appear more connected. It’s therefore always important to keep in mind which methods were used when interpreting animal behavior.

GC: We measured female social dominance in another study (which should be out soon). We recorded the outcomes of >1000 competitive interactions over food (like one bat displacing another from a spout of blood) in the same captive colony. We found a weakly linear dominance hierarchy but the patterns of female dominance were relatively weak, and female social rank was not clearly predicted by body size, age, or reproductive status. The dominance relationships we observed were not very consistent in their directionality or linearity compared to other groups of female mammals. For example, A might displace B, then later B displaces A; or A might displace B, which displaces C, which displaces A (circularity), and both of these should not happen in a linear dominance hierarchy. This lack of structure could be real, or it might be that we need to measure social rank in a different way. There’s always more work to be done.