Feedback and compensation in the gene regulatory network controlling the fate of multiciliated cells in the brain. 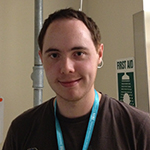 Multi-ciliated cells (MCCs) are highly specialized cells that harbor up to 300 coordinately polarized motile cilia which beat back and forth to generate directional fluid flows through tubes and cavities. MCCs line the brain ventricles where they move cerebrospinal fluid, the airways where they move mucus, and the reproductive tract where they are essential for transport of eggs and sperm. Over recent years we have learned much about the transcriptional network controlling MCC differentiation. It is composed of a set of transcriptional regulators, activated upon suppression of Notch signaling, which promote a gene expression program that results in basal body amplification, remodeling of the cytoskeleton, and the building of multiple motile cilia. One such transcriptional regulator, TAp73, an isoform of p73, directly activates up to 50 ciliary genes as well as other transcriptional regulators to promote MCC differentiation. Mice lacking TAp73 (TAp73 KO) exhibit a failure of airway multiciliogenesis, lack of mucus clearance, and severe respiratory tract infections.

In this new paper, Muriel Lize and colleagues have extended their analysis of TAp73 KO mice into different regions where MCCs are found. They find that the male and female infertility of TAp73 KOs was caused by reduced cilia coverage in the efferent ducts and fallopian tubes, respectively. Both defects lead to a loss of gamete transport. At the molecular level, the expression levels of key genes required for multiciliogenesis, including ciliary structural components and the master regulator of motile cilia genes, Foxj1, were downregulated or lost entirely. However, the authors made a surprising finding when assaying brain ventricle MCCs. In contrast to the situation in the reproductive tracts and airways, they found normal MCC differentiation and cilia function in the brain ventricles of TAp73 KO mice. Ventricle ciliary formation and beating, and resultant cerebrospinal fluid flow, were all normal upon loss of TAp73, despite TAp73 being clearly present in brain MCCs. Thus, different MCCs have different requirements for TAp73.

How, then, to explain the dispensability of TAp73 in brain MCCs? To answer this question, the authors suggest that the regulatory network topology can respond to loss of TAp73 by upregulating other factors. For instance, E2f4, a transcription factor that promotes MCC differentiation along with its partner MCIDAS, is upregulated in the choroid plexus after loss of TAp73. Micro-RNA (miR)-449, another known pro-ciliogenic regulator that is directly activated by MCIDAS/E2F4, was therefore also upregulated in TAp73 KO brains, a finding the authors made after performing sequencing of small RNAs from brain tissue. By contrast, this increased miR-449 did not occur in the airways or reproductive tract. Moreover, in brain MCCs, the upregulated miR-449 seemed to be at least partially compensating for loss of TAp73: loss of miR-449 led to more severe reduction in cilia in a TAp73 KO background than in a wild-type background. Overall, the authors suggest a compensation mechanism in which MCIDAS/E2F4 crosstalk with miR-449 helps sustain the pro-ciliary network in the absence of TAp73 (see Figure). 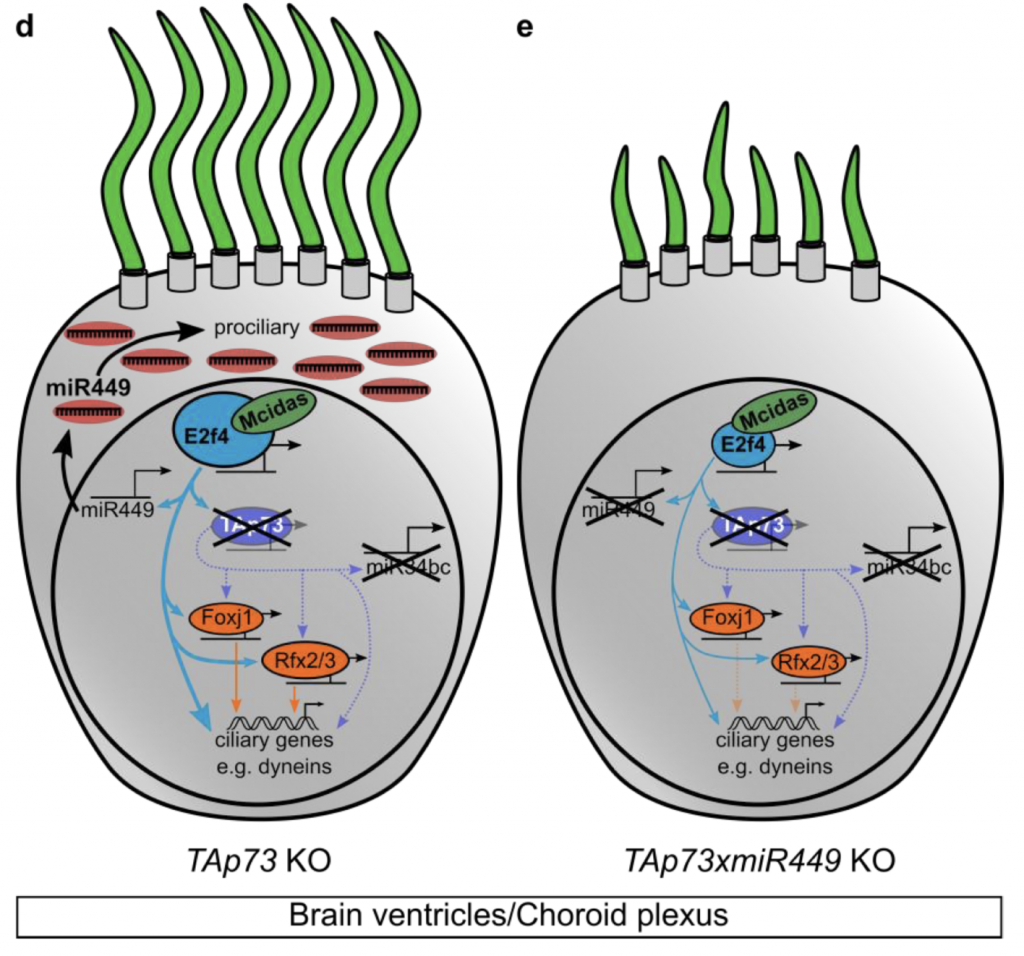 For me, the most exciting thing about this manuscript was that the authors searched for the reason why their gene of interest was not required in the process under study. They didn’t stop when they found a lack of a phenotype in brain MCCs, but then went on to investigate the different routes through the regulatory network that can produce a normal outcome in spite of the loss of a supposed key regulator. Such holistic reasoning combined with the current interest in genetic compensation makes this manuscript timely and interesting.

Further investigations might tackle some of the following questions:

Overall, now that many of the key players in the regulatory network controlling MCC differentiation are understood, the field seems poised to engage with systems biology to use quantitative approaches to understand the logic behind the network motifs that work to drive expression of genes at the appropriate level and time during the differentiation of MCCs.