In the last years, advances in TALEN and CRISPR genome editing technologies have made it reasonably easy to generate loss of function alleles for any given gene in many model systems used. These reverse genetic approaches led to a number of reports describing evident discrepancies between stable genetic knock-out models and results obtained by knock-down strategies (e.g. morpholino antisense oligomers or siRNAs) for the same gene. In most cases these phenotypic differences have been attributed to off-target hits or toxic effects of the employed knock-down reagents [1]. One study in zebrafish, however, reported on the upregulation of related genes in mutants but not after using transcriptional or translational knock-down approaches, suggesting that the phenotypic differences can be explained by a specific compensatory response in the knock-out but not the knock-down models for this gene [2]. Whether such a genetic compensation represents a general phenomenon that applies to many mutant situations and that -to some extent- protects organisms against deleterious mutations remains unclear. Furthermore it is not known how such transcriptional adaption responses are triggered in the mutant situation and how this could be possibly circumvented when generating novel mutant alleles.

The authors of this preprint tackle the question at which level and via which signal a genetic compensation mechanism can trigger the upregulation of related genes that partially or even fully compensate for the loss of the respective gene function. Using zebrafish and mouse models, the authors report for a number of mutants a transcriptional upregulation of paralogues or related family members of the mutant gene, even in the heterozygous state. Injection of the respective wild type mRNA does not reduce this response, indicating that the compensation mechanism is activated upstream of the loss of functional protein. They further show that for several of the genes analysed other nonsense mutation alleles exist that do not show transcriptional adaptation arguing against the DNA lesion itself to activate the response. However, when checking the amount of mutant mRNA present in those alleles, El-Brolosy et al. observe a strong correlation between the extent of the transcriptional adaptation response and the levels of mutant mRNA decay. In line with this finding, blockage of the nonsense mediated decay pathway results in higher mutant mRNA levels and consequently in a reduced or absent transcriptional adaptation response. Even injection of uncapped (and therefore instable) mRNA is sufficient to trigger transcriptional adaptation in a sequence-similarity specific manner, suggesting that degradation-intermediates of the mRNA decay pathway might initiate the compensatory response (see figure).

Finally the authors generate CRISPR-induced promoter (or whole gene) deletions to obtain alleles in which the mutant mRNA is not even transcribed in the first place. Importantly, these ‘RNA-less’ mutants fail to upregulate compensating genes, suggesting that the generation of such alleles could circumvent the here described genetic compensation mechanisms and unravel phenotypes that would have normally been masked by transcriptional adaptation. 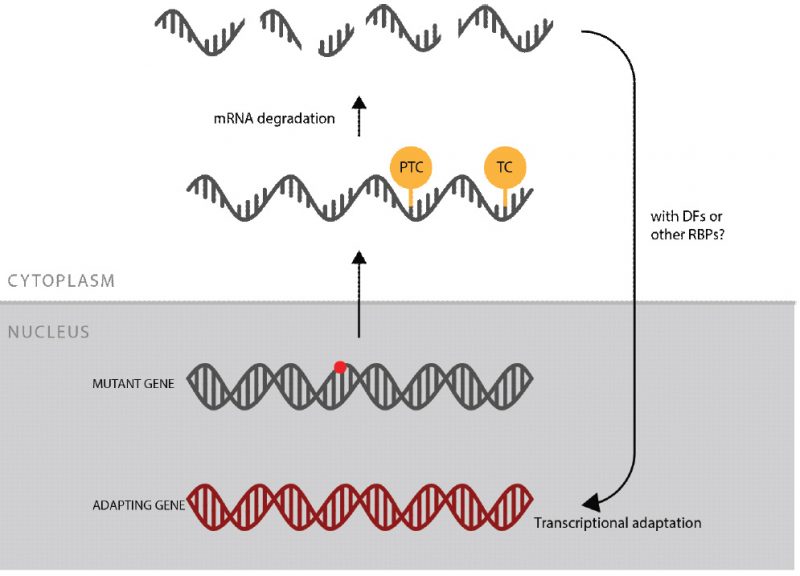 Why this is important

The work from El-Brolosy et al. indicates the existence of a conserved mechanism triggering genetic compensation via transcriptional upregulation of related genes. This compensation seems to be based on the instability of the mutant mRNA and the related availability of mRNA degradation products in the cells. Although the exact molecular mechanism of this response still remains enigmatic, the presented work clearly argues for the generation and analysis of knock-out models, in which the transcription of the gene is blocked completely (e.g. via deletion of the whole promoter region). Such an approach should minimize the risk of transcriptional adaptation-derived compensation effects masking a possible requirement for the gene of interest. Hence, producing ‘RNA-less’ alleles represents an important strategy for the CRISPR- and TALEN-mediated generation of novel mutants in different model systems in the future.

How exactly is the presence of mRNA degradation products transduced into a specific transcriptional upregulation of related genes? What molecular machinery is involved in this process?

Previous studies have reported that mRNA decay factors can translocate to the nucleus (in a manner dependent on their ability to degrade mRNA) and bind chromatin to promote gene expression (for example: Haimovich et al., Cell 2013).  Other studies have reported genetic and physical interactions of several decay factors with a number of proteins involved in gene expression including RNA pol II, chromatin remodelers and histone modifying enzymes.  As we show in Fig. 4a, a majority of the genes exhibiting sequence similarity with the mutated gene’s mRNA are upregulated in the mutant cells, suggesting a model whereby mRNA decay products guide mRNA decay factors to specific genes in a homology-mediated base-pairing fashion.  Other models are of course also possible, and the transcriptional adaptation response might in addition involve antisense or non-coding RNAs (Fig. S10).

How frequent is this type of mRNA decay-dependent genetic compensation? Is it a general phenomenon that is applicable for most/many genes in the genome?

Is this pathway conserved throughout evolution (e.g. in Arabidopsis, yeast and Drosophila)?

Genetic compensation is observed in many organisms (El-Brolosy and Stainier, PLOS Genetics 2017). For example, a lack of phenotypes was reported for several Arabidopsis mutants (Bouche and Bouchez, Curr. Opinion in Plant Biology2001); in C. elegans, incomplete penetrance of skn1 mutants was attributed to variability in expression levels of the compensating gene end-1 (Raj et al., Nature 2010);and in Drosophila, there are several examples of discrepancy between knockout and knockdown phenotypes, which might be due to genetic compensation (Yamamoto et al., Cell 2014).  Of course, one has to investigate each individual case in detail and determine whether transcriptional adaptation and mRNA decay are involved; we are currently conducting studies in yeast and C. elegans.