Meet the preLighters: an interview with Gautam Dey

Gautam Dey is a postdoctoral researcher working at the MRC LMCB, UCL, London, in the lab of Buzz Baum. Here, he is studying the evolution of cell cycle control using fission yeast and archaea. He has been a team member since the start of preLights and has written sixteen preLight posts (!) so far. We caught up with Gautam to get to know more about his science and drive for promoting preprints. 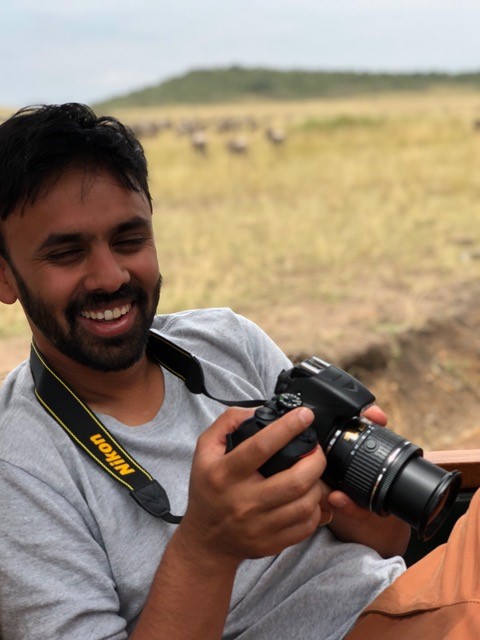 How did you get into biology and become a researcher?

If I have to pick one moment, it would be when I first read Richard Dawkins’ books on evolution. I was instantly captivated and becoming a scientist went from vague ambition to genuine career goal. I have my father to thank (or blame) for that – sensing a lack of direction, perhaps, he plied me with all sorts of books way too dense for a teenager! Though Dawkins himself has become an increasingly controversial figure, I still hold out hope that his early writing will stand the test of time.

I’ve had a pretty linear and fortunate trajectory through academia thus far, in time if not in space: Biochemistry undergrad in Delhi, a research-intensive Masters in Bangalore, PhD at Stanford, and now UCL for my postdoc.

What led you to choose your PhD lab and topic?

During my Masters I helped implement a genome-wide RNAi screen to study non-canonical modes of endocytosis in fly cells. This got me reading about systems biology, and in particular the idea that we would truly understand cellular regulatory networks once we mapped all their components and interactions. I joined Stanford’s department of Chemical and Systems Biology, and a lab that was very diverse but linked by a common interest in quantitative signalling dynamics.

And what problems were you working on there?

My primary PhD project was based on the fact that genes with similar patterns of presence or absence across the tree of life, indicating a shared evolutionary history, tend to function together. Inverting this relationship, similar presence-absence patterns- known as phylogenetic profiles- can be used to predict novel functions for genes. Building upon existing algorithms, I developed a new tool to identify co-evolving modules in the human genome, and went on to validate functional predictions for uncharacterised human genes in the lab.

Then for your postdoc, you took a slightly different direction in your research…

By the end of my PhD I had become slightly obsessed with the idea that we will never truly understand cellular regulatory networks without understanding their evolutionary history. Since re-enacting billion-year experiments is still beyond our reach, we can start to understand the evolutionary principles that underpin cellular biology by comparing species that are alive today – an approach that my scientific heroes have made incredibly successful under the catch-all term “evolutionary cell biology”.

I moved to Buzz Baum’s lab to study the evolution of cell cycle control. As it turns out, eukaryotes have inherited much of their core cell division and cytoskeletal machinery from archaea, but little is known about the cell biology of our living archaeal relatives. Putting together an incredible (and brave!) collaborative team, we started to investigate the thermophilic archaeon Sulfolobus – our distant cousin – in the lab. These fascinating cells grow at 75-80C and in low pH: building a live-imaging setup (the Sulfoscope!) that can handle those conditions has been a massive 4-year effort. You can read the lab’s first preprint on archaeal cell cycle control here, and we hope to share data from the Sulfoscope with all of you very soon!

We believe many of the ancient cell division control systems eukaryotes inherited from archaea are linked to the dynamics of the nucleus. To investigate this further, we chose the fission yeast S. pombe, a unicellular eukaryote that keeps the nucleus intact during cell division in what is known as a “closed mitosis”. This is very different from what animal cells do: disassemble the entire compartment and build it back up after division. How do you divide an intact nucleus?  We’ve recently shown that S. pombe locally disassembles the nuclear envelope in order to do so – in a way that suggests different mitotic strategies might have more in common than we realised! I’m currently trying to build on these findings.

“How do you divide an intact nucleus?  We’ve recently shown that S. pombe locally disassembles the nuclear envelope in order to do so.”

Let’s move over to preprints – you’ve posted two recently, but why do you think they’re important?

I think the advantages have been laid out incredibly well by vocal advocates, including the folks over at ASAPbio and here at preLights! My favourite thing about preprints is that they allow you, as the producer of the work, to decide when your research output should be seen by the public or by your peers. I’m particularly invested in the idea that this is a very good thing for young scientists, because we are on short-term contracts and are frequently expected to demonstrate output for grant and job applications. But, as everyone knows, publishing important work in impactful venues can take months or even years. For this reason, I’ve been very vocal about the benefits of pre-printing for people who are at my career stage.

In preprint-friendly bubbles (on Twitter, for example) it’s easy to forget that actually not everybody is convinced that pre-printing is a good idea, or perhaps even aware of preprints! I don’t think we should stop promoting preprints just yet.

Yes, I got into it because it’s a very cool way to empower people of our career stage to participate in promoting preprints, and also (hopefully!) help preprint authors by commenting on their work and disseminating it to a wider audience. In the best-case scenario, we serve to create a community space to host and archive the first public discussion of the research in question – especially since few make use of the bioRxiv commenting system, and Twitter threads are here and gone in a flash. If we can do this on a regular basis, we’ve certainly played a small but significant part in helping to move science along!

On a more personal note, I’ve always been easily distracted, and I love reading about all different sorts of biology – writing preLight posts is a nice way to get something productive out of that reading! There’ve been so many unexpected benefits too – I love being part of the preLights community and catching up with you at conferences all around the world!

“There’ve been so many unexpected benefits too – I love being part of the preLights community and catching up with you at conferences all around the world!”

You’ve had several ideas for projects related to preprints, such as looking at how papers change between preprint submission and journal publication. Could you tell us more about this?

There have been some recent discussions about training in peer review – basically, the idea being that if the students of today learn how to evaluate science and provide constructive feedback to their peers, they will be the peer reviewers par excellence of tomorrow. Yet often students don’t get much insight into how peer review works until they submit their own first paper – and if they’re unlucky, this can be a deeply traumatic experience!

Recently I’ve piloted an experiment with graduate student tutorials here at the LMCB, getting the class to discuss both preprint and accompanying final published version (and reviews if transparent!). This has produced encouraging results, and I’m hoping to eventually scale this up with ASAPbio and preLights support. The long-term goal would be to have an easily accessible resource of preprints and papers that also document how the manuscript has changed in review.

You are also very active as a postdoc representative, for example recently you were involved in the organisation of the BSCB/BSDB spring meeting. How do you find the time and energy for these extra things?

In fact, it is exactly these extra things that reenergise me after long, frustrating stints in the lab. I’m proud to advocate for a community that I genuinely believe in, and I love interacting with other scientists more than any other part of my job!

What are your future plans for after the postdoc?

I hope to start applying for independent (faculty) positions relatively soon, though based on the experience of my peers I expect this to be a very long journey. I hope to continue working on the nucleus, using fission yeast as my primary model organism and base. Wish me luck!

What might people be surprised to find out about you?

I was very (too) serious, as an undergraduate student, about theatre. In my final year, I was on the verge of embarking on a career as a director and actor! Science won out though – and future audiences dodged a bullet!