The gut microbiome, i.e. the complex community of microorganisms living inside the gastro-intestinal tract of animals, has been shown to be intimately intricated with host physiology, with key functions in host nutrition, immune system homeostasis or behavior. In terms of nutrition, gut microbes can help the host to break down complex molecules into smaller units that are more easily assimilable. Carbohydrates are important nutrients for both microbes and their host. Simple sugars such as glucose or lactose are easily absorbed by the host whereas complex carbohydrates such as cellulose, resistant starch or inulin are much less available for the host as energy source.

The gut microbiome of termites or ruminants have evolved, through evolutionary times and co-evolution with their host, towards giving the ability to its host to digest complex sugars for their nutrition. However, the use of non-native microbes to manipulate the microbiome in order to provide additional nutritional functions to its animal host has been poorly studied.

The authors here investigate the potential of a simple microbial community, containing cellulose-degrading and probiotic bacteria, to allow Caenorhabditis elegans to use a complex carbohydrate, cellulose, as nutrient source, as well as to provide protection against pathogen infection (Fig. 1). 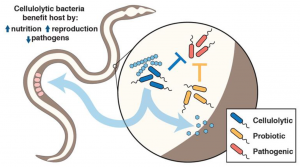 In order to engineer a simple microbiome able to degrade cellulose into simple sugars, the authors first screened the native gut microbiome of C. elegans. For that, they tested a collection of gut bacterial isolates for their ability to degrade carboxymethyl cellulose (CMC), an analog molecule of cellulose. By checking the degradation of CMC using a Congo Red assay, they found that none of the native gut bacteria of C. elegans were able to degrade cellulose. They thus screened a number of soil isolates and they found two strains of cellulose-degrading bacteria: Pseudomonas cellulosa and Bacillus subtilis (Fig. 2A). P. cellulosa released the highest amount of reducing sugars, including glucose, compared to B. subtilis or cellulose-degrading engineered Pseudomonas putida (Fig. 2B). This result suggests that P. cellulosa could be a great candidate nutritional endosymbiont for C. elegans, providing it with simple sugars for its nutrition. 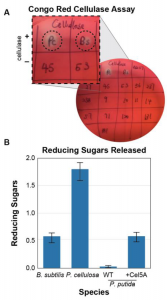 Fig. 2. Assessment of cellulase activity (A) and reducing sugars release (B).

In order to determine whether the colonization of C. elegans with P. cellulosa would allow the host to use the released glucose for its nutrition, the authors used radiolabeled carbon (14C) incorporation into the worm biomass as a first measurement. They found that 14C incorporation was significantly higher for P. cellulosa-colonized host than for E. coli OP50 colonized worms, before and after removal of bacteria by antibiotics treatment. This demonstrates that the hydrolyzed 14C-labeled glucose from 14C-labeled CMC has been taken up by the host, and its associated microbiome (Fig. 3A). A second experiment using a fluorescent reporter of carbon uptake in fat bodies of C. elegans was used to further confirm incorporation of reducing sugars due to CMC degradation by P. cellulosa. The authors showed that P. cellulosa pre-colonized worms showed an increase in fluorescence from the reporter when CMC was provided as carbon substrate (Fig. 3B). 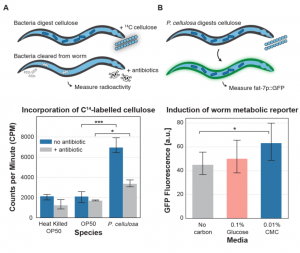 Moreover, in order to have an additional benefit of the engineered community, the authors added a probiotic lactic acid bacterium, Lactobacillus plantarum, which has been shown to provide protection against pathogens. The underlying hypothesis was that the addition of this probiotic strain could prevent the disruption of the community by the intestinal pathogen Salmonella enterica LT2. To test this hypothesis, worms pre-colonized with P. cellulosa were exposed to S. enterica for 37 hours. The results showed that both P. cellulosa and L. plantarum, alone or together, were effective to suppress the pathogen when CMC was added as a carbon source, relative to the control (Fig. 4). 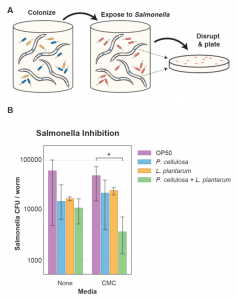 Overall, this study presents a really nice and simple system of host-microbiome interaction in C. elegans that shows how the microbiome can be manipulated and engineered to give a nutritional and pathogen protection advantage to its host. Understanding how simple host-microbiome systems, such as the one presented here, function would allow scientists to use this knowledge in more complex systems such as the human gut microbiome. The ecological principles exploited in this system, such as colonization resistance or stimulation through metabolic interactions, are key to understand species interactions inside a community and to engineered microbiomes to provide a function to its host.