Entomophthovirus: An insect-derived iflavirus that infects a behavior manipulating fungal pathogen of dipterans

Fly-manipulating fungus may have a viral partner in crime 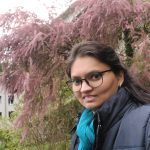 Zombie ants and summiting flies – The wild is abundant with fungal parasites that hijack animal behaviour to their advantage, often also killing the host. For example, the Ophiocordyceps unilateralis fungus makes ants attach themselves to leaf veins before sprouting a fungal fruiting body from the ant’s head. Another fungal pathogen, Entomophthora muscae pushes flies through three typical end-of-life behaviours: i) summiting- rising to a high position, ii) extension of the fungus-laden proboscis (mouthpart), which sticks to the surface, and iii) lifting of the wings to expose the abdomen. This ‘death pose’ puts the dead fly in an optimum position for dispersal of fungal spores growing out of the fly’s abdomen to other healthy flies below. 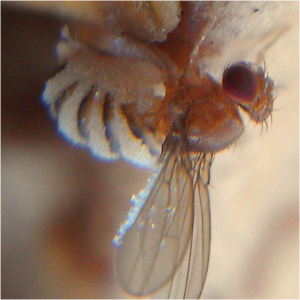 How fungal pathogens are able to alter insect behaviour is intriguing, but the lack of a model system with developed tools has limited its studies. Carolyn Elya, who had earlier observed wild Drosophila dying in the characteristic death pose, found that many of the wild Drosophila species at Berkeley and across the United States contained the deadly insect destroyer fungus Entomophthora muscae. Next, she developed a protocol to establish the fungal infection in the laboratory Drosophila strain CantonS opening up a treasure of information from Drosophila genetics and neuroscience for studying how the fungus hijacks the fly brain to manouvre it to its own benefit. The fungus spreads through the fly moving to the nervous system likely altering behaviour. The fungus invades the entire fly abdomen gradually breaking down all its organs, until there is only fungus left. Importantly, she managed to grow the fungus in vitro allowing further genomic and transcriptomic analysis of the fungus that is evolutionarily very distant from most of the commonly studied fungi. Expression data from the fungus was abundant in RNAs that had no hits in the fungus. BLAST analysis of these unidentified transcripts lead to mind-blowing findings that form the basis of this new preprint.

Fungal expression analysis uncovered RNAs that appeared like viral sequences. The sequences had no match with the fungus genome ruling out that they are fungus-borne retroviruses. Instead, the data was full of RNAs similar to a virus previously found in Drosophila and named Twyford virus (based on the place where the infected flies originated from). The Drosophila melanogaster Entomophthovirus (DmEV), as the authors renamed it, consists of one pro-protein that contains three coat proteins, an RNA helicase, a protease and an RNA-dependent RNA polymerase characteristic of iflaviruses (related to Picorna virus family).The researchers use transmission electron microscopy to provide the final evidence for the presence of the virus in the fungus. They found typical icosahedral picornavirus-like capsids in the fungal culture supernatant as well as inside fixed fungal cells.

Iflaviruses are mostly known to be insect viruses and have never been found in fungi before. Therefore, the researchers next asked whether the fungal-virus association is a widespread phenomenon. Interestingly, the devastating fungus and virus were always found together, even in relatives like the common housefly, Musca domestica and the cabbage fly suggesting that the virus is obligately associated with E. muscae in the wild. The authors even found it difficult to wash away the virus from their in vitro fungal culture. The authors speculate that during evolution the virus moved from the original insect host to its fungal pathogen.

This preprint from Michael Eisen’s group opens up the possibility of a three system interaction in altering insect behaviour. The presence of the iflavivirus in both the fly host and its fungal pathogen suggests a broad host range of the virus. The possibilities that a virus uses a fungal carrier to spread across hosts, or that a fungus is aided by a viral partner in invading flies, pushes the boundaries of inter-kingdom interactions. The preprint also provides a reason to revisit many other manipulating fungal pathogens.

The authors already raise the big questions. Whether the fungus requires the virus for insect invasion? Can the virus by itself multiply within the fly hijacking its behaviour?

I have a few questions.

1) There is considerable inter-animal variation in viral load. Are their corresponding differences in fly behaviour and mortality?

2) There is a decline in viral load at later stages of fungal infection. Is the fungus able to control viral levels at different stages of fly infection? Are there viruses in the fungal spores?

3) Do the other eukaryotic commensals of flies have the virus?