How does appearance affect the way two species of bacteria interact? A simple but effective (and aesthetically pleasing!) means to study mixed species interactions on a micro scale. 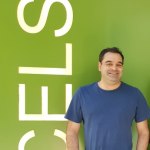 Studies of community-intrinsic properties have shown that interspecies interaction impacts the phenotype, function, and composition of the community members (Madsen et al., 2018). Bacterial biofilms are clusters of microorganisms sticking to a surface and/or each other in a self-produced matrix. Cooperative and competitive behaviours are commonly found in the biofilm matrix and have been shown to improve the biomass by increasing the tolerance of the entire community to adversity (Tan et al., 2017).

In this preprint the authors investigate the effects of physiological differences on the community composition and spatial distribution in lab-grown cultures of Pseudomonas aeruginosa, Pseudomonas protegens and Klebsiella pneumoniae. The authors successfully show through the co-culturing species and observing relevant interactions that morphology is a relevant proxy for the interactions in a multi-species context.

In this study, the authors investigate the interactions between members of community consisting of P.aeruginosa PAO1, P.protegens Pf-5 (formerly P. fluorescens) and K. pneumonia KP-1 by co-culturing them in a colony biofilm model, where the cells are connected to each other and the feature of biofilms are dependant on the physiology and environmental factors.

For mono-species colonies, each species differs in how they separate into sectors. Clear segregation was observed between strains although the shape of the border differed. To characterize the differences in growth quantitatively, the percentage of pixels with similar relative signals within each colony was used. In dual species colonies, no clear radial separation was observed, instead, each combination showed a distinct and unique pattern.

When a small colony variant (SCV) was cultured in dual species colonies alongside parental strains, the SCV mixed very rarely with its wildtype in the co-culture. It also occupied less area than the wildtype when cultured separately. Although it mixed slightly more with other species, SCV did not affect the area covered by other strains. Results suggest type IV pilus (TFP) motility of P. aeruginosa enables mixing of dual species colonies.

To Investigate the effects of extracellular matrix production (ECM), non-mucoid variants (NMV) that did not produce normal ECM were cultured in dual-species colonies with parental strains. Jagged boundaries between NMV sectors suggested that the secreted extracellular matrix was the reason for straight boundaries. In addition, the NMV covered less area than the wildtype in the co-culture but covered similar amount of area when separated. The co-culture area decreased in diameter at a later time point. Biofilm ECM produced by wildtype strains improved interspecies, not intraspecies competition.

Motility was encouraged by low percentages of agar and thus affected inter-strain interaction. The decrease in agar concentration increased the colonized area by the TFP motility deficient SCV both in separated culture and in co-culture. This observation suggested that a lower concentration of agar enabled flagella-based motility and partially compensated for this defect. ECM production is thus thought to be a strategy that promotes colony competitiveness.

The question asked in this paper goes straight to the fundamentals making it a valuable research contribution that can inform other potential research topics pertaining to species interaction in a multispecies community such as natural biofilms. This paper utilizes a straightforward, no-fluff approach to experimentally show the effect of physiological characteristics on interspecies interactions. The results are clear and reproducible, yet they comprehensively tackle this interesting question.

This approach offers the flexibility to study a wide variety of factors potentially involved in interactions between species (as long as the factors are genetically amenable). The species variants help to show the importance of the phenotypic function of the composition of the biofilm.

Thanks for the interest in our work! Here are my responses to your questions: