Fantastic work by the @TewariLab highlighting the importance of the kinesin family during the Plasmodium life cycle. 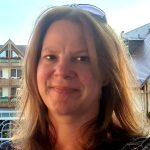 The life of a malaria parasite is very complex, jumping from the Anopheles mosquito vector to its mammalian host back into the mosquito. Parasite development within the mosquito starts with the uptake of male and female gametocytes during a blood meal on an infected host. Gametocytes are immediately activated in the gut of the insect due to the change of environmental conditions. While female macrogametes release a subset of vesicles to egress from the red blood cell, male gametocytes undergo three rapid rounds of DNA replication followed by the formation of eight individual microgametes. Microgametes rely on tubulin-based motility to find their female counterpart, necessary for the subsequent steps needed to develop into a motile ookinete. Ookinetes ultimately traverse the midgut epithelium to establish an infection at the gut wall, leading to the formation of infectious sporozoites which are transmitted back into the host during another bloodmeal. In the mammalian host, sporozoites enter the liver, from where thousands of merozoites are released into the blood, causing clinical symptoms.

In this preprint, the authors localize all Plasmodium berghei kinesins using GFP-tagging and provide a detailed functional characterization of parasites lacking kinesin-13 or kinesin-20. 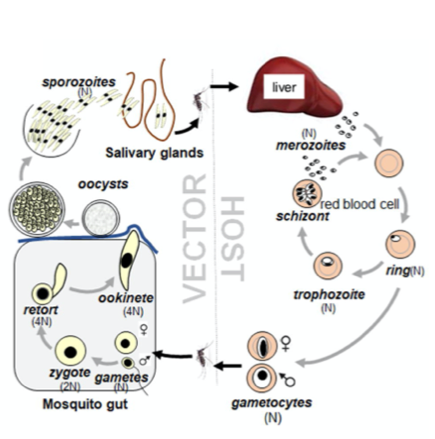 Key findings of the paper

The authors first generated parasite lines with the respective kinesin fused to GFP at the C- terminus and observed their expression and protein localization using live-cell imaging throughout the complete Plasmodium life cycle.

Most kinesins seem to function either in transmission-stage parasites or during parasite development within the mosquito and only kinesin-13 and kinesin- 5 are already expressed in schizonts in the mammalian host. Strikingly, microscopic analysis of the different kinesins resulted in a diverse localisation pattern, including mitotic spindle, axonemes, surface pellicle and a polar distribution. 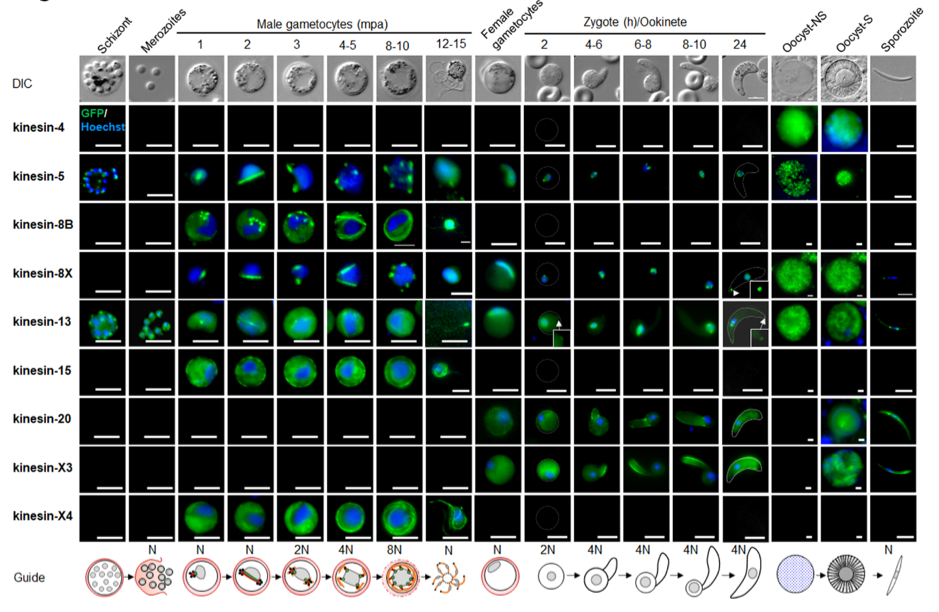 A summary of live cell localization of all kinesins during the P. berghei life cycle. (Taken from Zeeshan et al 2022 BioRxiv)

In several attempts the authors were unable to delete Kinesin-13, hinting towards an essential function of the protein in the blood, in contrast to all other kinesins. Yet, expression of kinesin-13 under an asexual blood-stage specific promoter allowed further characterization of the protein during parasite transmission into the mosquito. Infection of mosquitoes with these parasites did not result in any oocysts. More detailed analyses of gametocytes and ookinetes using TEM and expansion microscopy combined with staining of tubulin revealed impaired spindle and axoneme formation in microgametes and ookinete retorts with disorganized microtubules, which could also be confirmed by transmission electron microscopy.

Kinesin-20 is essential during ookinete development.

To characterise the function of kinesin-20, the authors generated parasites lacking the complete gene using standard double homologous recombination, replacing the gene with a selection cassette. Phenotypic analysis of gametocytes did not show any difference to wildtype. However, the lack of kinesin-20 affected ookinete shape and size, due to the formation of shorter microtubules, quantified after expansion microscopy. This led to impaired ookinete motility and thus reduced mosquito transmission. 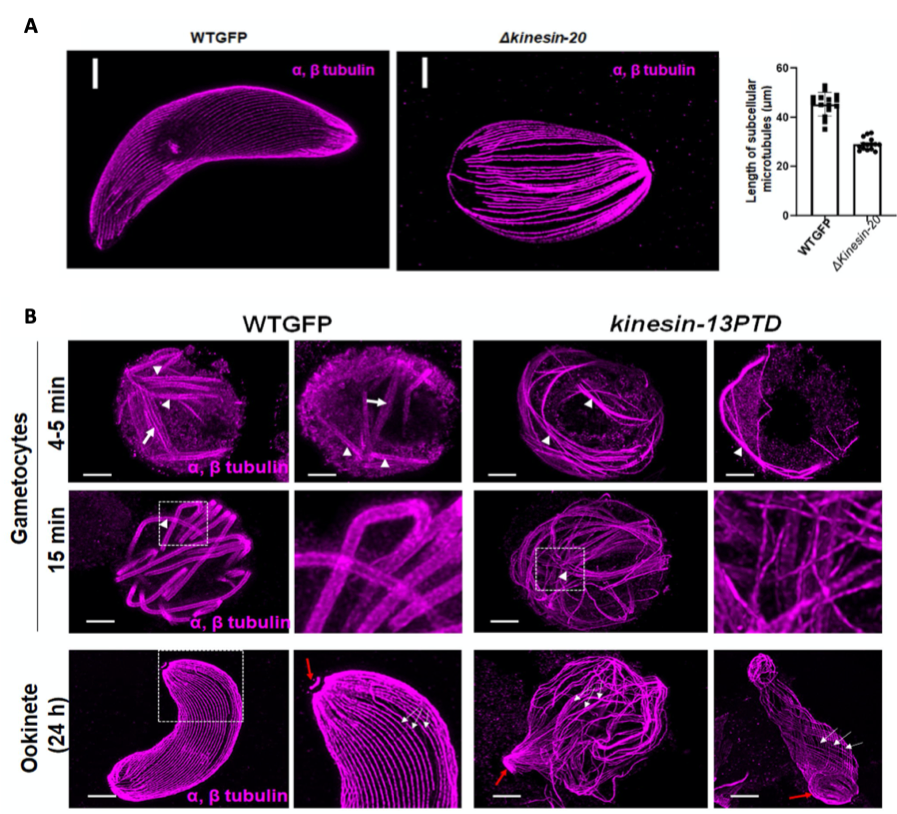 This is an elegant study which nicely combines reverse genetics and advanced imaging, including expansion microscopy as well as live cell imaging and electron microscopy, to discover new biology. I am particularly fascinated by expansion microscopy, which resolves nanoscale structures using a conventional confocal microscope. This enables to address many more questions to understand the fundamental biology of Plasmodium parasites, including kinesins and microtubule motors, in the future.

Further/ previous publications about kinesins from the same group:

Do you have any hypothesis on how kinesin-13 is involved in MT organization?

Kinesin-13 belongs to the KIN I subfamily, which contain internally located motor domains, involved in depolymerization of MTs regulating its dynamics during various cellular processes. Kinesin-13 in Plasmodium spp. share the same features. P. falciparum kinesin-13 binds to MT dimers, bend and depolymerise it as shown previously in vitro by one of our co-authors (Moores et al 2002; PMID: 11983180). In the present study we show that P. berghei kinesin-13 is involved in spindle formation, axoneme assembly and apical polarity. We hypothesize that kinesin-13 binds with MTs in different subcellular compartments during various stages of Plasmodium life cycle and regulates MT organization by its depolymerization in many cellular processes.

Along the same line, do you have any hypothesis on how kinesin-20 regulates MT length?

Kinesin-20 belongs to a new subfamily of motors that are not characterised. We found that P. berghei kinesin-20 makes a ring like structure in developing ookinetes and regulates its shape. According to our hypothesis kinesin-20 binds with IMC/sub-pellicular microtubule complex and regulates MT dynamics by its polymerization. We do not know the exact mechanism but its deletion inhibits the polymerization of MTs resulting in short subpellicular MTs that defines the shape and size of ookinetes.

We did not find any defect in gametocyte egress by visualising under microscope but it will be worth to label the RBC membrane of mutants and examine properly.

Are you planning to analyse or colocalize any candidate proteins mis- regulated in your mutants?

Yes, we have generated some transgenic lines to study the co-localization and function of candidate proteins.

What are your next steps towards a mechanistic insight of kinesins? Would proximity labelling with kinesins as bait make sense?

We have already done some preliminary experiments on interacting partners.  Proximity labelling will be great to validate the results.