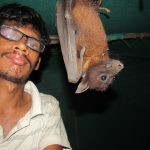 Many mammals, including bats, are known to exhibit ‘natal philopatry’ – a trait where individuals return to their birthplace during their breeding seasons (Greenwood, 1980). Temperate bats exhibit increased female philopatry whose genetic signature can be traced back even at the mitochondrial level. Studies focussing on the roosting behavior of maternity colonies have reported the existence of physically defined social groups within colonies in the bat species Nyctalus lasiopterus (Popa- Lisseanu et al., 2008). However, not much is known about whether genetically related individuals share the same social group and prefer to roost together. In this study, using microsatellite markers, the authors have verified how genetic relatedness of individuals influences roost fidelity in social groups of N. lasiopterus in a maternity colony whose roosting behavior has been well documented by field observations and radio-tracking in the past (Popa- Lisseanu et al., 2008). The results of the current study contribute to the understanding of whether roost sharing is dictated through genetic relatedness or natal philopatry in female bats. The authors have also discussed why natal philopatry could be more advantageous in choosing roost mates than genetic relatedness in such maternity colonies.

In this preprint, the authors showed that mother-daughter pairs share the same social group more frequently than expected and that the levels of group-sharing increases with the levels of genetic relatedness within the group members. In other words, bats in the predefined social groups shared their roosts with their mothers, daughters, or at least one of their close genetic relatives. Finally, the authors genotyped individuals that were previously radio-tracked who had shared the same roost and had found that roost associations among them are not kin-based.

Since this study colony is an already well-studied population in the context of roosting behavior (Popa- Lisseanu et al., 2008), the authors used the previously defined subdivisions/social groups, and assessed the genetic structure of the whole population after which they made comparisons among those groups. Using 11 microsatellite markers, they have carefully estimated both pairwise and the mean relatedness among individuals and found that 81% of the individuals shared their social group with at least one close relative.

In order to test whether the relationship status among individuals influences group sharing, the authors grouped pairs into one of the four defined relations, namely Parent- Offspring (PO), Full-Sibling (FS), Half-Sibling (HS), or Unrelated (U), based on pairwise relatedness estimates. In comparison, they found that proportions of only the parent-offspring (PO) pairs in the social groups differed significantly from a random expectation indicating mother-daughter pairs shared the same social group more frequently than expected

Using the same categories and pairwise relationship estimates, they also found that the proportions of individuals sharing the same group increased as the proportion of relatedness among them increased, indicating that these bats tend to share their roosts with their genetic relatives.

The authors discuss why philopatry could be more useful for females when it comes to choosing roosting partners. They cite and hypothesize that the young adult females could benefit from their mothers’ experiences in choosing a roost during such seasons (associative learning) or could establish social bonding with their mothers leading to benefits of co-operative behaviors such as information transfer and mutually nursing each others’ young ones (sociality). However, the authors have clearly stated that these hypotheses are based on certain assumptions from the available information on the roosting and social behavior of this species. More behavioral observation is needed to support these hypotheses and to better understand the benefits of natal philopatry.

Bats, being the only flying mammal, have certain unique challenges when it comes to breeding and nursing the young (Kerth et al., 2008). I liked this study because the authors have explored the genetic structures of previously known social groups in a well-studied bat colony and have tried to explore the influence of natal philopatry on the social structuring of these bats. In order to understand concepts like natal philopatry and their relationship with roosting, such studies that follow up existing behavioral knowledge and test their molecular basis are very crucial. Without integrating field-based knowledge on roosting behavior with such carefully designed follow up studies like this, it would be otherwise impossible to understand such concepts in free-ranging mammals such as bats.

Future directions/questions to the authors

Facultative chemosynthesis in a deep-sea anemone from hydrothermal vents in the Pescadero Basin, Gulf of California

Facultative chemosynthesis in a deep-sea anemone from hydrothermal vents in the Pescadero Basin, Gulf of California