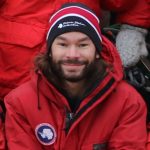 The stability of a fish population is influenced by the relationship between social dominance hierarchies and the partitioning of available resources among individuals. Understanding how behavioural mechanisms are affected by this relationship can improve our understanding of the drivers governing population structure. Red-spotted masu salmon (Oncorhynchus masou ishikawae) exhibit strong dominance hierarchies where larger dominant individuals exclude smaller subdominants from the most profitable foraging territories, and the species frequently experience significant predation risk from terrestrial predators. Naman et al. study how the behavioural trade-off between foraging success and predation risk is influenced by dominant-subdominant interactions and resource abundance.

The results indicate that size-dependent trade-offs between foraging success and predation risk can mediate the strength of dominance hierarchies by allowing competitively inferior subdominants to access resources that would otherwise be monopolized. The results also indicate that individuals exposed to an abundance of resources may exhibit a ‘feast or famine’ behavioural response; accepting higher predation risk in order to meet their energetic demands. This response may override the effect of a predator on the risk-averse behaviour of larger individuals and reduce the foraging opportunities for subdominants.

The study by Naman et al. is among the first to manipulated predation risk and resource abundance simultaneously and assess their joint effect on resource partitioning within dominance hierarchies. I am particularly interested in this study because it assesses the relationships between multiple environmental biotic factors (i.e., resource availability, dominant-subdominant interactions, and predation risk), and how they affect foraging behaviour in fishes.

Future studies could add additional dimensions to the experimental design by including abiotic factors such as elevated temperatures, salinity fluctuations, or aquatic hypoxia, and assess the extent to which these environmental stressors enhance or override the behavioural responses presented in this study. Naman et al. assessed the responses of fish in reaches containing 10 fish. It would be interesting is the behavioural responses are influenced by the number of fish in the experimental reaches or the ration of dominant/subdominant individuals.