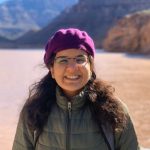 Bacteria come in all different types of cell envelopes. They are traditionally classified as either monoderm or diderm, depending on whether the cell is surrounded by one membrane or two membranes respectively. Thermotogae are didermic, anaerobic, hyperthermophilic bacteria.  Their cell envelope consists of an inner membrane, a thin layer of the peptidoglycan cell wall and a unique outer membrane. In typical diderms, lipopolysaccharides (LPS) are major components of the outer membrane. But Thermotogae lack LPS. They have an extended sheath-like structure as the outer membrane with porin-type proteins. This outer membrane is also called “toga” in honor of the loose overflowing garment worn by citizens of ancient Rome.

On the phylogenetic tree of life, Thermotogae are placed at a deep branch and are considered one of the earth’s earliest life forms (Figure 1). Hence, these bacteria may provide important clues about the evolution of the bacterial cell envelope. In this study, the authors characterize the biochemical and morphological characteristics of the cell envelope of Thermotoga maritima using a combination of cryo-electron tomography, proteomics and lipidomics.

The authors used cryo-electron tomography to characterize the cell envelope architecture of T. maritima at a high resolution. The cell envelope of T. maritima consisted of an inner membrane, a thin layer of peptidoglycan and a toga. The distance between the inner membrane and the toga was significantly greater at the poles (∼450±100 nm) compared to the lateral sides (∼70±10 nm). Surprisingly, the toga appeared in 2 distinct forms – either as a 4-nm thick monolayer or a 7-nm thick bilayer. Subtomogram averaging of the toga revealed that it is arranged as a hexagonal lattice with porin-type proteins arranged in trimers.

The authors then analyzed the lipid composition of the inner membrane and the toga and found differences in the enrichment of some lipids in the two fractions. Particularly, phosphatidylethanolamine (PE) lipids, short free fatty acids and select digalactosyldiacylglycerols were enriched in the toga fraction whereas glycerol-linked diabolic acid was enriched in the inner membrane. The authors then validated some of their lipidomics data with fluorescence microscopy of cells labeled with lipid dyes. When T. maritima cells were fluorescently labeled with a PE derivative, puncta were observed in the toga of exponentially and stationary growing cells, while the inner membrane was only weakly stained. Moreover, during the stationary phase, these puncta formed membrane microdomains (~200-700 nm in diameter)

The authors next used proteomics to characterize the protein composition of the inner membrane and the toga. Some of the most abundant toga proteins included homologs of Ompα, Ompβ, BamA and uncharacterized proteins R4NP97 and G4GDI2. Ompβ, BamA, R4NP97 and G4GDI2 are predicted to form β-barrels and porin-type trimers. Phylogenetic analysis suggested that homologs of abundant toga proteins are conserved among multiple Thermotogaceae members. BamA, Ompα1, and Ompα2 are conserved in all members of the phyla while Ompβ is poorly conserved. Previous studies have suggested that Ompβ is the major porin forming the toga. But proteomics data generated in the study suggested other uncharacterized proteins predicted to form β-barrel trimers (R4NP97, G4FDI2) may also be important structural components of the toga lattice.

Other abundant proteins in the toga included enzymes to degrade polysaccharides like xylanases, maltodextrin glucosidase and β-xylosidase.

It is important to study the diversity of organisms on this planet so that we can learn more about the evolutionary processes that shaped life as we know it today. Bacteria belonging to the Thermotogaceae species represent one of the earliest forms of bacteria and have unique properties. This study does a great job of laying down what is currently known about the cell envelope of T. maritima and performing experiments to confirm previous findings as well as generate new hypotheses. They have generated rich data of diverse types (cryo-ET images, lipidomics and proteomics) which will be a great resource for future discoveries and hypothesis generation in the field. I also enjoyed reading their discussion section where they speculate on the origins of the bacterial outer membrane that likely helped and shaped how bacteria interact with their surrounding environment as the outer membrane is home to different porin-type proteins that regulate what goes in and out of the bacterial cytoplasm.