Flipping on and off Myc can turn on or off pancreatic cancer. 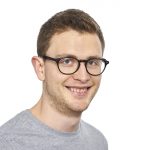 Pancreatic ductal adenocarcinoma (PDAC) is a deadly disease with a 5-year survival of 5%. Poor prognosis is a result of the aggressive nature of the disease with as many as 90% of patients diagnosed with unresectable cancer that is resistant to chemotherapy. A key feature of PDAC is a dense fibroinflammatory stroma which can make up to 90% of the tumour bulk. This produces a complex microenvironment of mesenchymal, endothelial, inflammatory and immune cells with research beginning to understand the complexities of these interactions (see Tape et al., 2016).

It is currently thought that pancreatic ductal adenocarcinoma (PDAC) arises through a stepwise progression of precursor lesions called pancreatic intraepithelial neoplasias (PanINs). PanINs are characterised by the sequential accumulation of mutations. Initially, the oncogene KRAS is mutated and this is typically followed by inactivation of tumour suppressors such as TP53 or CDKN2A. Although we know the aberrations associated with PDAC progression, the specific function at different stages of the disease remains unclear.

Translocation of Myc to the nucleus drives rapid immune infiltration and disease progression.

The oncogene Myc is frequently activated in PDAC and has a plethora of downstream effects that culminate to mediate cell proliferation and drive PDAC progression (Hessman et al., 2015). To address the question of how Myc activation affects tumour progression the authors generated and characterised a new mouse model of pancreatic cancer. They combined the Pdx1-Cre; LSL-KrasG12D (KC) model with a homozygous Rosa26-LSL-MycERT2 transgene. This resulted in KrasG12D expression in the pancreas and a controllable MycERT2 variant of c-Myc which translocates to the nucleus, and is hence active, upon the injection of tamoxifen. This provided temporal control over Myc activation and novel insight into the role of Myc in the progression of PDAC.

Firstly, because the KC model develops precursor lesions in a defined timeframe, MycERT2 could be activated for 3 weeks when only early stage lesions are present in the pancreas. Interestingly, this induced a dramatic and rapid progression to PDAC with extensive stroma. Characterisation of the stroma found an avascular, hypoxic, desmoplastic stroma infiltrated with leukocytes. Strikingly, increased proliferation and changes to the stroma were observed after 1 day of Myc activation (Figure 1). As a control, MycERT2 activation alone in the pancreas only promoted a moderate increase in proliferation. 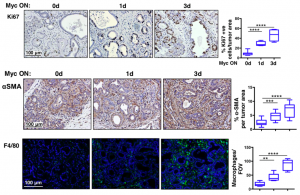 As MycERT2 is only expressed in the tumour epithelium the authors hypothesised that the signals driving stromal changes arise from the epithelium. To better understand these signals, arrays were carried out 6 hours after tamoxifen administration to activate Myc in PanINs. They identified several signals originating from the epithelium associated with immune infiltrate: the macrophage chemoattractants CCL9 and CCL2 plus the neutrophil attractant CXCL5.

Upregulation of the AXL kinase ligand, GAS6, was also observed. Inhibition of GAS6 or AXL kinase inhibited Myc-induced neutrophil influx but did not affect CXCL5 which led the authors to suggest this is a novel, Myc-driven neutrophil recruitment pathway. Together, this analysis highlighted several candidate signals from the epithelium responsible for the accumulation of stroma.

One advantage of the MycERT2 model is that Myc can be turned off. Following 3 weeks of activated Myc, which induced PDAC in the KC model, Myc was de-activated by stopping the administration of tamoxifen. Surprisingly, this led to regression of all adenocarcinomas. Next the study tested whether Myc dependency is a common feature of PDAC. For this the mutant KrasG12D and p53-deficient model of PDAC was combined with the Omomyc dominant negative Myc dimerization mutant. Importantly, blocking Myc by this method also triggered regression of PDAC tumours.

To assess the earliest changes following de-activation of MycERT2, the authors looked at PDAC tumours 1 and 3 days following the removal of tamoxifen. They observed rapid elimination of macrophages and neutrophils, loss of desmoplasia and decreased hypoxia. In addition to this massive stromal reversion the tumour epithelium exhibited decreased proliferation but also increased apoptosis (Figure 2). 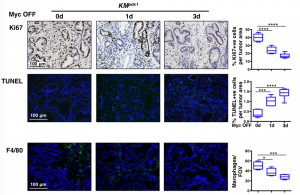 Lots of animal models of pancreatic cancer activate oncogenes and delete tumour suppressors simultaneously and examine tumourigenesis. But PDAC appears to initiate with KrasG12D mutations and then accumulates further aberrations. The novel control of Myc by fusion to the ERT2 domain provides very nice temporal control and sequential activation of Myc months after Kras activation.

The other benefit of this approach is you can de-activate Myc and look at both the acute and longer term effects of this withdrawal. This demonstrated significant changes to the tumour and stroma in only 24 hours!

Finally, it’s really interesting that simply switching on or off Myc had this large, orchestrated effect leading to tumour progression or regression, which the authors propose could be part of some coordinated physiological process.

If Myc hacks the endogenous regenerative program what do you think would happen if you combined your Myc model with other models of regeneration such as caerulein induced pancreatitis?

Why do you think removal of Myc leads to apoptosis of epithelia in vivo?

Did you see an effect on metastasis upon induction of Myc?

I think this idea of Myc hacking into a physiological injury resolution program is really exciting, do you think it would be possible to pharmacologically promote this program?