Stop SCID-ing around! The role of NHEJ factors XLF and MRI in mouse immune system maturation

DNA double strain breaks (DSBs) are deleterious lesions that can seriously compromise genome stability. However, under certain circumstances, the repair of DSBs can generate diversity. For example, during T and B cell (lymphocytes) development(1). These cells undergo a process called V(D)J recombination to produce a vast diversity of antibodies and T cell receptors (TCRs) available for an immune response. Here, DSB repair is facilitated by non-homologous end joining (NHEJ). Several key enzymes act during NHEJ. Initially, the heterodimeric complex (composed of Ku80 and Ku70) is recruited to the DSB, followed by the DNA repair kinase DNA-PK catalytic subunit (DNA-PKcs) which can signal for downstream factors to be recruited including XRCC4-like (XLF; involved in the ligation of DNA ends) and factors which stabilise the NHEJ complex; PAXX (paralog of XRCC4 and XLF) and Mri (modulator of retroviral infection; 2). In mice, NHEJ deficiency is linked to severe combined immunodeficiency (SCID; 3&4), however when either XLF, PAXX or Mri are inactivated, mild immunodeficiency only occurs in XLF deficient mice but not for Mri or PAXX deletion suggesting loss of XLF can be compensated for (i.e possesses functional redundancy). Functional redundancy can occur when factors have very similar or identical functions or their functions complement. When XLF is deleted in combination with either Mri or PAXX, deficient embryos don’t survive indicating some interplay between these factors during immune system development (and other, wider roles). Here, the authors generate several double deficient mouse strains, by reducing or inactivating Trp53 activity (a tumour suppressor protein; 5), which prevents embryonic lethality. They use these strains to understand the roles of these factors in B and T cell development. 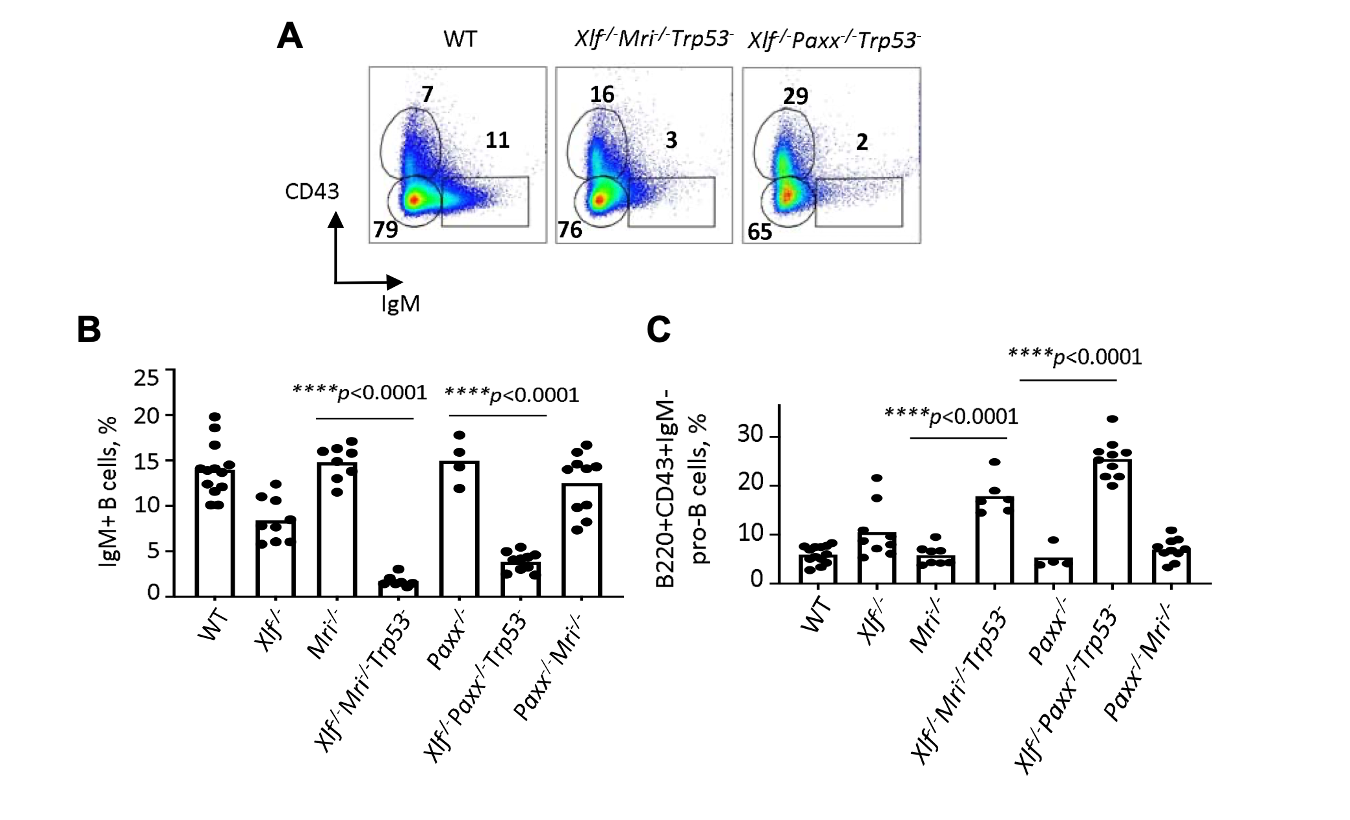 Figure shows (A) FACs plots showing B-cell development in WT mice and double deficient mice (control mouse FACs plots are available in Figure 3A of the preprint). (B) Graph shows the percentage of IgM+ B-cells in WT mice and KO mice. (C) Graph shows the percentage of progenitor B-cells (B220+CD43+IgM-) in WT mice and KO mice. Statistics were generated using a one-way ANOVA test. Figure was adapted from Figure 3 (version 2 of preprint) under a CC-BY-NC-ND 4.0 International license.

Prior work from the authors revealed that the combined deletion of XLF+PAXX in mice, which results in embryonic lethality, was linked to Trp53 activation (6). Using this information, the authors generate XLF-/-Mri-/-Trp53+/- and XLF-/-PAXX-/-Trp53+/- mice (which they confirmed by PCR analysis) via several rounds of crossing between single deficient mice and mice heterozygote for Trp53+/-. By attenuating Trp53 activity, these two strains of double KO mice can survive into adulthood though Mri-/-XLF-/-Trp53+/- mice were notably lighter (by ~7g) than comparable single KO mice.

Next, the authors examined how the combined loss of XLF+Mri or XLF+PAXX affected B and T cell development. By harvesting the spleen and the thymus from these deficient mice and appropriate control strains, the authors detected changes in the number of splenocytes and thymocytes. Mri-/-XLF-/-Trp53+/- and XLF-/-PAXX-/-Trp53+/- mice had less splenocytes (~20 fold for CD19+ B cells for XLF+Mri and up to 600 fold for CD19+ B cells for XLF+PAXX) and less thymocytes (9-fold for XLF+Mri and ~40 fold for XLF+PAXX). In keeping with these observations, the authors noted a reduced spleen development relative to the controls, particularly in the XLF-/-PAXX-/-Trp53+/- mice. In all, Mri-/-XLF-/-Trp53+/- and XLF-/-PAXX-/-Trp53+/- mice show immunodeficiencies (they have a SCID like phenotype with the authors refer to as “leaky SCID”) and a level of functional redundancy exists between XLF and PAXX and XLF and Mri. Their data also suggests that the B cells being made in the bone marrow are compromised before making it to the spleen.

Next, the authors used flow cytometry to investigate B cells from the bone marrow (from the femora of mice). Here, they reveal that the deletion of XLF+Mri or XLF+PAXX resulted in higher numbers (2-3 fold and 3-4 fold respectively) of progenitor B cells (marked by B220+CD43+IgM-) and lower levels of immature B cells (IgM+ cells) indicating the progenitor B cells generated by these mice are largely defective during their maturation into immature B cells.

When PAXX or Mri are deleted in combination with XLF, this effect is embryonic lethal, or, when Trp53 is inactivated, their deletion compromises B cell development. With this in mind, the authors next asked what happens if both PAXX and Mri are deleted in mice. In all, the found no clear differences in PAXX-/-Mri-/- mice (which were viable and fertile) compared with appropriate controls suggesting these factors do not genetically interact. However, when Mri was deleted in combination with the kinase DNA-PKcs, viable young could not be recovered. Therefore, they concluded that Mri and DNA-PKcs do interact genetically.

DNA repair mechanics, immune system development and diversity are very complex yet intertwined biological processes. Here, the authors built upon their previous findings to ask questions about the interplay between DNA repair factors (required for NHEJ) and immune system diversity and development using deficient mice strains. Their findings showing functional redundancy between XLF, Mri and PAXX in addition to the mouse strains generated will aid future research into this area.

Q1: NHEJ is an important and the primary pathway selected for repair of DSBs in mammalian organisms. It is possible that over time, DSBs will be repaired poorly or un-repaired if NHEJ is compromised. Do your XLF-/-Mri-/-Trp53+/- and XLF-/-PAXX-/-Trp53+/- mice show any longer-term effects as adults? For example, tumours, sensitivity to genotoxins or premature aging?

Q3: Your data shows that the maturation of B cells (from pro-B to pre-B) is negatively affected. DSBs can also occur in pro-B cells to help with IgH chain assembly leading to pre-B cells meaning the pro-Bs can also be affected by the loss of NHEJ. Given this, despite the mice producing more pro-B cells, do you notice a higher rate of apoptosis or defects in these pro-B cells?