SLC19A1 is a cyclic dinucleotide transporter

Cytosolic DNA is a major signal to trigger immune activation and anti-viral immunity. One pathway leading to immune activation downstream of cytosolic DNA sensing in mammals is the cGAS-STING pathway. cGAS binds to cytosolic double-stranded DNA and synthesizes the second messenger 2’3’-cyclic-GMP-AMP (cGAMP), which activates STING, eventually leading to type I interferon production, innate immune activation, and a variety of anti-viral effects. STING agonists, including synthetic cyclic-dinucleotides (CDNs) are additionally under clinical investigation as novel cancer immunotherapies, owing to their ability to stimulate favorable anti-tumor responses in mouse models. Recent data also indicate that there may be a role for extracellular cGAMP as a diffusible second messenger, particularly in cancer models – however, the mechanisms by which cGAMP crosses the plasma membrane to trigger immune activation, and its properties outside the cell, remain poorly characterized. Three new preprints show roles for extracellular cGAMP and identify SLC19A1 as a transporter mediating uptake of extracellular cGAMP and other CDNs, allowing for immune activation.

This trio of preprints greatly solidify our understanding of cGAMP activity and resolve important questions in the field regarding the activity of extracellular and exogenous cGAMP. This is particularly important as synthetic CDNs, and other mechanisms of perturbing the cGAS-STING pathway, move forward in clinical trials. Together, these papers help build a model of cGAMP export, extracellular stability, and import (Figure 1), providing multiple new avenues of study of CDN-mediated immunity and therapeutic axes to target this key immune pathway. 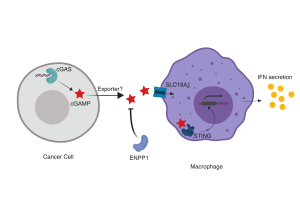 Sensing of cytosolic dsDNA by cGAS leads to cGAMP synthesis in cancer cells. cGAMP is exported by an unknown mechanism, leading to free soluble extracellular cGAMP. This may be degraded by ENPP1, but can also be imported into immune cells such as macrophages by the transporter SLC19A1. There, it binds to STING, leading to IRF3 activation and downstream effects including type I IFN secretion.