The impact of biological sex on alternative splicing

In most eukaryotes, a gene is composed of regulatory sequences (for expression), introns (non-coding region) and exons (coding sequences). When a gene is transcribed, the DNA sequence is converted into messenger RNA (mRNA) then translated into a peptide sequence. Before mRNA is generated, the introns are removed by splicing and the exons joined together. When the pattern of splicing is altered (alternative splicing; AS), different proteins versions (isoforms) can be produced from a single DNA sequence, which can have completely different functions from one and other. AS is common, with ~95% of human genes (1) and is involved in gene expression regulation and protein diversity. AS is also observed between male and female humans (sex-biased differential expression) and may contribute to differences in how the sexes age or develop disease, for example AS are associated with cancer development (3), some cancers may additionally be influenced by AS events that are associated with being male or female. Here, the authors analyse transcriptomics data from a large database of human tissue-specific gene expression studies (2) to examine for AS events between males and females across a range of different tissue samples and catalogue them to provide a databank of sex specific AS events highlighting the estrogen receptor pathway as a source of AS events.

In this study, the authors use transcriptomics data (RNA-seq) acquired from the Genotype-Tissues Expression (GTEx) project (https://gtexportal.org/home/; 2). The GTEx project is a large consortium acting to generate a database of tissue specific gene expression and regulation in humans. The authors collate and align RNA-seq data and examine for AS and gene expression changes. 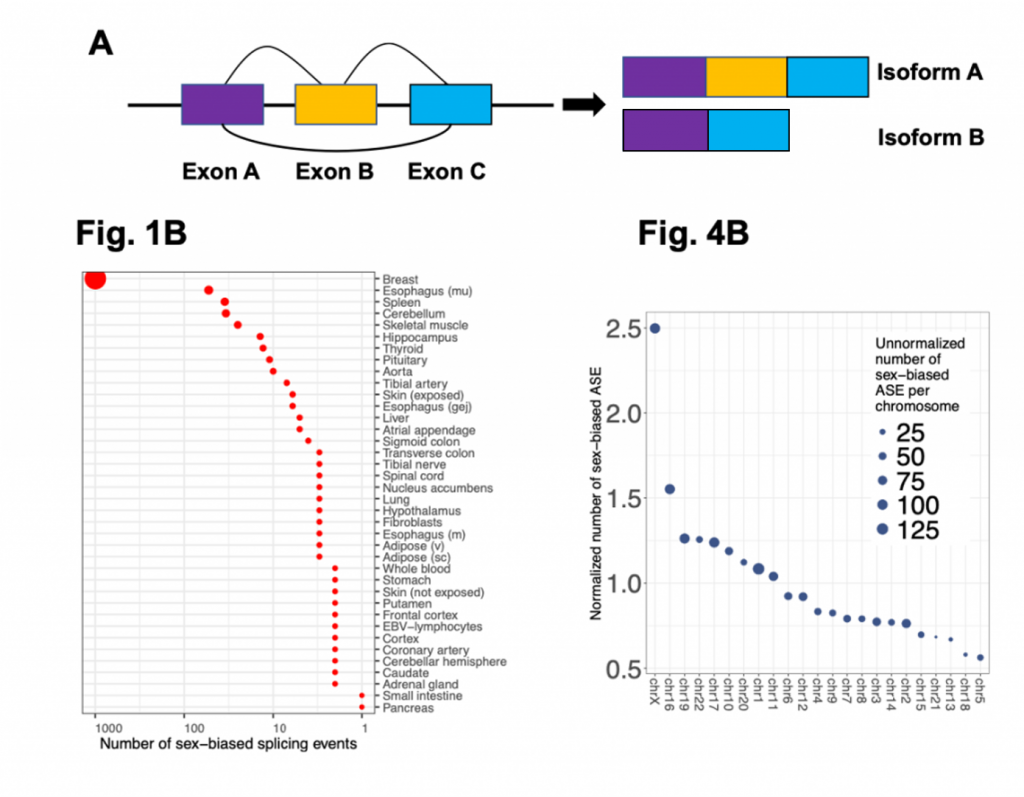 Figure details data from the Karlebach et al. Figure A shows a cartoon representation of alternative splicing of exons to generate two different protein isoforms (A and B). Fig1B shows the counts of genes which are differentially spliced across the tissue samples examined by the authors in this study. Fig4B shows the number of alternative splicing events (per 1000 exons) for each chromosome which are significant. Figure A was made by preLighter and Figs1B and 4B adapted from Karlebach and used under a CC-BY 4.0 International license.

By examining over 3000 genes, the authors identify ~4500 significant differential gene expression (DGE) events across 39 different tissues samples from males and females (15531 sampled datasets). Using models, they find ~900 genes were affected by differential AS (DAS) events; the majority of DGE and DAS events (per tissue) were linked to breast tissue.

2) AS events can be associated with disease development

By looking at gene ontology (GO) terms, which can be used to prescribe molecular functions to genes and links genes to putative processes, the authors show an enrichment of genes associated with functions in RNA binding, hormone responses and metabolism. Examining their data further, the authors uncover examples of AS events, specifically skipped exons (SEs). SEs are events which an exon (or exons) are skipped during transcription meaning that region is not present in the mRNA coding for the protein. They found generally SEs were more common in female samples than male samples. For example, in the breast tissue of females, the authors show SLK generally included a particular exon, as opposed to male samples in which it was removed, which caused a nuclear localisation SLK and has been linked to cancers (4) in other studies.

Estrogen is an important hormone for female development and reproduction. Estrogen activity is regulated by estrogen receptors (ER), ER-alpha and ER-beta. ER-beta activity has been linked to AS in hormone associated breast cancer cells. By determining and comparing AS events from transcriptomics collected from ER expressing cells (5) and to breast tissue samples from the GTEx consortium, the authors asked if the sex-biased AS events they detected were associated with estrogen. They show an overlap between sex-biased splicing events across these datasets supporting this hypothesis.

They also found that sex-biased AS events correlated with locations of ER-chromatin interactions with the chromatin in support of the ER being involved in sex-biased AS.

I like the work in this paper as here the authors collate information from a large online databank of tissue samples to generate a community usable resource. They use up to date studies in their work and a large number of tissue samples to aid in statistical significance. Such works will help advance forwards our understanding of AS and how differences between AS in females and males may affect disease progression.

Q2: The data here examines bulk RNAseq datasets which show AS events across a population of cells meaning rarer sex-biased AS events could be lost. With the increasing abundance of single-cell transcriptomics datasets, do you plan to use your approach to examine such events at the single cell level?

Q3: Not all protein isoforms produced by sex-biased AS will become functional and recently it has been proposed that AS is just ‘noise’ with only a few dominant isoforms persisting as opposed to a diversity of protein isoforms present. Do any of the datasets you examined have corresponding proteomics and genomics data, and, if so, are you planning to test which of the sex-biased AS events you detected correlate with the presence of this particular protein isoform and if that had consequences for the cells such as disease development?

Q4: AS can also increase protein stability by removing ‘degron’ which target proteins for destruction by the proteosome. Could you detect any sex-biased AS events that could lead to such a change and thus be associated with disease predisposition?