Toxoplasmosis is an emerging infection caused by the protozoan parasite Toxoplasma gondii (T. gondii). These parasites cycle between cats (where the parasite sexually reproduces) and other mammals (intermediate hosts), in which they invade and replicate inside almost all types of cells [1]. In intermediate hosts, parasites (tachyzoite stage) divide rapidly inside the host cell, bursting out then going on to invade new cells. However, when conditions are harsher, the parasite can invade any cell (though T. gondii shows a preference for muscles or brain cells) and become a very slow replicating encysted stage (a bradyzoite). These cysts are hard to treat, result in a long-living infection and can infect other mammals if consumed. Humans can also become infected with T. gondii if in contact with infected cat faeces, or during pregnancy when the parasite transmits from mother to baby. Most infections are asymptomatic but for unborn babies or those individuals with reduced immune function, the infection can become serious causing life changing damage like blindness or severe mental disorders [2]. As these parasites undergo several changes as the progress from one developmental stage to the next, post-translational modifications (PTM) co-ordinate this process. Much work aims to understand the scope of these modifications. In many eukaryotes, glycosylation in the nucleus and the cytoplasm is a common PTM used to alter protein behaviour, whereas, in T. gondii, the addition of the sugar fucose (fucosylation) has been implicated to act in a similar manner. Previous work by the authors has investigated the role of O-fucose in the secretory pathway of T. gondii where this modification can regulate protein expression and signalling. Here, in this recent study, they show O-fucose plays a role in regulating nuclear proteins, Proteins carrying this modification found within the nucleus of the cell near to nuclear pore complexes (NPCs), which are pore-like structures facilitating transport of material in and out of the nucleus [3,4]. Here, the authors aimed to understand more about the roles of O-fucosylation in T. gondii by investigating a putative O-fucosyltransferase (OFT) T. gondii SPINDLY (TgSPY).

The role of TgSPY, which is an orthologue of the Arabidopsis thaliana OFT SPINDLY (AtSPY), is unknown. To ask if TgSPY has a role in O-fucosylation in T. gondii, the authors tested TgSPY for O-fucosyltransferase activity. By expressing recombinant TgSPY tagged with 6x His epitopes (TgHis6SPY) in bacteria, they confirmed TgSPY could function as an OFT in T. gondii using several different assays. Next, by deleting TgSPY (which is non-essential) in tachyzoite cells and randomly inserting a copy of TgSPY carrying 3x myc epitopes fused to the C-terminal (∆spy::TgSPY-MYC3), they examined the behaviour of a fucose-specific lectin Aleuria aurantia lectin (AAL) by microscopy in these mutants and control cells. They revealed the loss of TgSPY largely had little effect on growth in culture when compared to controls but ∆spy cells showed no clear nuclear staining of AAL suggesting no O-fucosylation had occurred. Conversely, in ∆spy::TgSPY-MYC3 cells, the authors rescued the loss of endogenous TgSPY; the cells grew moderately better than control cells and AAL signal was detected in the nucleus supporting the occurrence of O-fucosylation. These AAL distribution patterns were similar to the distribution of NPC signal as they observed in their previous work. 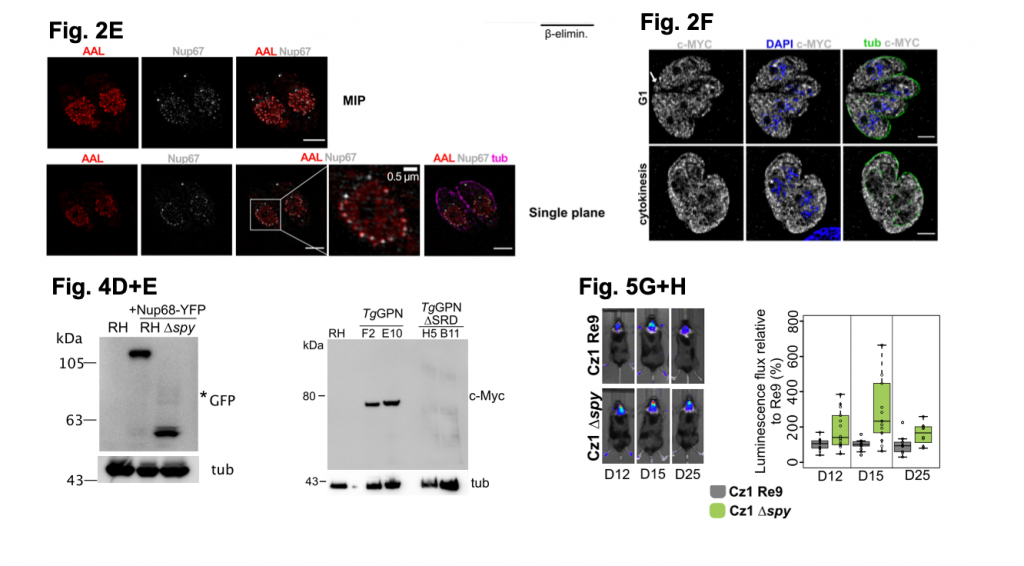 Next, the authors examined the biochemistry of TgSPY. By exploiting the fact deletion of TgSPY is non-lethal in T. gondii, they expressed different versions of TgSPY-MYC3 containing point mutations. They generated 5 mutant cell lines, each with a single point mutation and looked for changes in AAL signal or enzymatic activity. Mutations of D619, H623, K793 and to Alanine G695 to Aspartic acid or E693 to lysine (all located in the catalytic domain of TgSPY) abrogated the activity of this enzyme when TgSPY was expressed in bacteria when O-fucosylation activity was measured by the transfer of labelled Fucose to a synthetic peptide known to be O-fucosylated. They noticed also the expressed proteins were less stable and all point mutant lines showed no or vastly reduced AAL signal as well when examined by microscopy supporting a loss of O-fucosylation activity. The authors also investigated an additional mutant in which the majority of the N-terminal tetratricopeptide repeats (TPRs) were removed leaving 3 at the C-terminus (TgSPY-3TRPs). This type of truncation was used previously for AtSPY to characterise this enzyme’s activity against peptides. No AAL signal was seen in the TgSPY-3TRPs cell lines suggesting these repeats are needed to localise TgSPY to the nucleus to aid during nuclear fucosylation of proteins.

As O-fucosylation may alter the abundance or localisation of protein in T. gondii, the authors tested this by asking what happens to protein stability when O-Fuc is lost. Previous work shows a Ser-rich domain (SRD) isolated from a GTPase (TgGPN) in T. gondii is modified with O-Fuc. The authors fused this domain to yellow fluorescent protein (YFP) and expressed this in ∆spy tachyzoites. They could not generate a stable line however they were able to examine SRD-YFP localisation transiently. They found deletion of TgSPY reduced SRD-YFP signal and the signal was not enriched in the nucleus suggesting O-Fuc modification of SRD affects protein stability (as protein levels were very reduced). They further support this in two ways:

Overall, their data supports a role for this domain and this PTM in protein stability.

Lastly, the authors asked if loss of TgSPY could affect bradyzoite production. Using the T. gondii strain CZ1, the authors generated a ∆spy mutant, which also expressed firefly luciferase Re9. Using luciferase, the authors could track parasite location in infected mice to ask if deleting SPY affected infection dynamics. They also looked for bradyzoite formation by staining for the marker SAG2Y (which is found on the surface of the parasites) or by probing with Dolichos biflorus agglutinin (DBA). Bradyzoites lacking ∆spy showed no AAL labelling by microscopy suggesting they need TgSPY to perform O- fucosylation. Loss of TgSPY also affected parasite growth more in the CZ1 background (which is more prone to developing bradyzoites) than the other strain used in this study. By inducing differentiation of the parasites in culture, they found less bradyzoites formed when TgSPY was absent however, in mice, no differences were seen in parasite distribution, but more luminescent signal was seen in the brain of mice infected with the cells lacking TgSPY. Their data suggests O-fucosylation may play a role in bradyzoite formation and perhaps in the accumulation within the brain.

I found it very interesting that ablating O-fucosylation of nuclear proteins in T. gondii does not cause severe defects in the parasites themselves. These data raise the question as to what the exact role this modification plays, given the loss of it also destabilises proteins and reduces their expression. Here, the authors have opened up discussions about this modification setting up an interesting foundation on which to ask more questions as to why T. gondii fucosylate proteins to control their behaviour. The authors also use an array of techniques to ensure support their findings, capturing some beautiful images along the way!

Q1: The phenotype of TgSPY is more prominent in CZ1 cells in culture compared with RH strain (which is routinely used in T. gondii research labs). Is it possible this is due to RH being more robustly adapted to culture and genetic manipulation?

It is quite possible that since RH is so well adapted to grow in vitro, it might be more tolerant of the effect caused by lack of O-fucose and the consequent decrease in certain proteins steady-state levels.

Q2: You propose O-Fuc addition to proteins may help to generate reservoirs of proteins needed under stress conditions. Have you looked at how this PTM changes in the presence or absence of external stresses, for example, serum starvation conditions?

We are indeed planning to address this in future work. Both, as you suggest, to investigate if O-Fuc is affected by nutrient starvation & other stresses and if there is a difference in how spy-deficient parasites respond to these conditions. Differentiation to bradyzoites can be induced in vitro with multiple stresses, like nutrient-depleted medium and high pH. Therefore, the ability to respond to stresses might offer a connection to the phenotype we observe in the CZ1 strain (decrease in bradyzoite differentiation rate).

Q3: In A. thaliana, AtSPY is involved in regulating the circadian clock of these organisms. Though in T. gondii, the existence of an intrinsic circadian clock has yet to be confirmed, the related Apicomplexan parasite which causes the disease Malaria (Plasmodium spp.) has been recently shown to possess one suggesting it is possible for T. gondii to have one also. Could it be possible for TgSPY and O-fucosylation may be needed for a similar function in regulating a ‘clock’ cycle?

It is hard to draw direct parallels with Arabidopsis for two reasons. First, only few AtSPY target proteins have been identified in this system, so we do not know how widespread this PTM is in plants or how much overlap there might be in the type of proteins that are O-fucosylated in these two organisms. Second, plants encode both OGT and SPY (their proteins can be modified with both O-Fuc and O-GlcNAc), adding an increased level of complexity. That said, if any evidence of a circadian clock in Toxoplasma is found, it will be interesting to see if any of the proteins involved are substrates of TgSPY.

Q4: Why do you think you see increased luminescence in the brain of mice infected with T. gondii lacking TgSPY?

Our working hypothesis is that the decreased bradyzoites differentiation results in a higher ratio of tachyzoites/bradyzoites in brain infected with ∆spy vs parental strain. Since tachyzoites are more metabolically active that bradyzoites, that might result in a higher luminescence signal. This latter point should be demonstrated by comparing the luminesce signal intensities of bradyzoites vs. tachyzoites at least in vitro.