The parasite Plasmodium falciparum transmits malaria through the bite of Anopheles mosquitoes. Of all Plasmodium species, P. falciparum is the major cause of malaria. In 2019, it was responsible for 99.7% of estimated malaria cases in Africa, 50% of cases in South-East Asia Region, 71% of cases in the Eastern Mediterranean and 65% in the Western Pacific . The same year there were estimated 229 million cases of Malaria and 409.000 deaths worldwide.

Current antimalarial control is highly dependent on artemisinin combination therapies. Thus, it is very concerning that parasites with a decreased sensitivity to this drug have emerged, resulting in the delayed clearance of parasites from patients. This slowed parasite clearance is predominantly associated with nonsynonymous mutations in the P. falciparum kelch13 gene (PfK13). This lineage of artemisinin resistance is spreading throughout Asia and Africa, threating the efforts to treat and eradicate malaria. It is thought that artemisinin resistance involves multiple cellular and metabolic processes. Although many of these processes have been described in vitro, what´s going on in natural infections is less certain.  In this preprint, Zhu and coworkers from different parts of the world (Thailand, Singapore, UK, Netherlands, Bangladesh, US, Myanmar, Laos, Vietnam and Israel) aimed to tackle this issue using a transcription-wide associated analysis. Transcription-wide associated analysis estimates the effect of each genetic variant on the activity level (or expression) of genes related to a disease. Thus, using this method allowed them to identify causative genetic variations of artemisinin resistance using parasites isolated from natural infections that occurred between 2016 and 2018.

Transcriptomic sequencing of the P. falciparum population in the Great Mekong Subregion (GMS, the region in which antimalarial drug resistance was first identified)

First, the authors isolated P. falciparum RNA from 577 patients’ blood samples without artemisinin treatment (zero-hour) and conducted DNA microarray and RNA-seq. For 459 patients, samples were also collected 6 hours after taking artemisinin. From the zero-hour samples, they were able to identify the distribution of the different life cycle stages of P. falciparum and found out that the ring stage (young intra-erythrocytic asexual stage) was predominant. The principal component analysis (PCA) of the zero-hour transcriptomic profile showed that the hours post infection variable generated the major differences across samples. Another interesting result obtained from the PCA is the separation of two major parasite groups according to geographic regions (eastern and western GMS). This division correlates with a specific lineage with the artemisinin-resistant C580Y mutation of PfK13 found exclusively in the eastern region (eGMS).

Next, the authors performed a transcriptome-wide associated analysis and identified specific genes, most likely acting together with PfK13 mutations, whose expression/activity is participating in the parasite resistance to artemisinin. They related the expression of each gene with the parasite clearance half-life and hours post infection. They identified 69 upregulated and 87 downregulated transcripts in the zero-hour samples. These transcripts correspond to genes whose biological function has been previously linked to artemisinin resistance, including protein and redox metabolism, functions linked to the digestive vacuole and mitochondria, and host cell remodeling. They collectively termed these genes as Artemisinin Resistance-associated Transcriptional Profile (ARTP).

Utility of ARTP as a marker of spread and evolution

To investigate the use of the ARTP as a representation of artemisinin resistance in eGMS, the authors performed a clustering analysis in the resistant parasite samples (identified by their slow clearance phenotype) and identified six clusters with a distinct geographical distribution. No bias was observed regarding lineage in any cluster. This suggests that the ARTP can be used as a fingerprint to investigate resistance to artemisinin.

In vivo transcriptional response of P.falciparum to artemisinin

To assess the transcriptomic response to artemisinin in vivo, the authors evaluated and compared the six-hour samples to the zero-hour samples. They identified 20 induced genes and 73 repressed genes in resistant parasites after 6 hours of treatment and 33 induced and 34 repressed genes in susceptible parasites with almost no overlap, suggesting a distinct transcriptional response to artemisinin. Finally, the authors compared their results with in vitro transcriptional responses reported in the literature, as summarized in Figure 1. This figure shows the functional assignment of resistance markers in different processes inside the parasite. 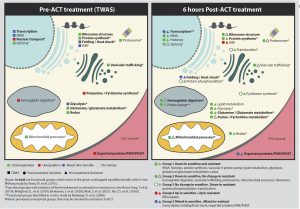 Figure 1: Functional assignments of transcriptional artemisinin resistance markers derived from TWAS analysis at zero-hour and that of genes repressed/induced after 6 hours of treatment with artemisinin. Colours represent transcriptomics directionality for each group and also the association to previous independent in vitro studies.

The data presented and analyzed by the authors suggest that there is a characteristic transcriptional pattern emerging in artemisinin-resistant P. falciparum parasites in Asia. They describe that the processes involved in artemisinin resistance are very complex and occur early in the asexual cycle of P. falciparum, diminishing the killing rate of the drug at an early stage.

Malaria is a parasitic disease that is especially endemic in low-income populations, with a large health and economic impact on both the developing and developed world, causing millions of deaths every year. Resistance to antimalarial medicines is a recurring problem around the world. I think it is important to address this issue, because these diseases are often overlooked. Using high-throughput sequencing technologies, the authors of the preprint were able to identify specific genes involved in artemisinin resistance in P. falciparum. This could potentially be a first step in identifying a marker for evolution and spreading of drug resistance in malaria.

Currently, many countries with a high burden of malaria have weak surveillance systems and are not in a position to assess disease distribution and trends, making it difficult to optimize general responses and respond to acute outbreaks. The authors suggest that it is possible to use this technology to perform Epidemiological Surveillance of artemisinin resistant parasites.

preLists in the systems biology category: