Do my mutations matter? The role of epistasis in gene evolution

Cells can evolve through mutation however, the same mutation found across different individuals does not always lead to the same outcome. For example, the environment the individual interacts with (i.e. lifestyle/diet), or other pre-existing mutations in the DNA may influence the effect of any new mutations. These ‘individual-level’ traits or experiences could explain why one person may be more likely to develop a disease than someone else even with the same associated mutation. Genetic interaction or ‘epistasis’ describes an interaction between new mutations and their existing genetic background (i.e. present mutations). Such interactions can happen between mutations within the same gene (intragenic) or between different genes (intergenic), but little is known about what happens if one mutation affects the expression and another affects how the same protein behaves (i.e. is active or stable) (1). 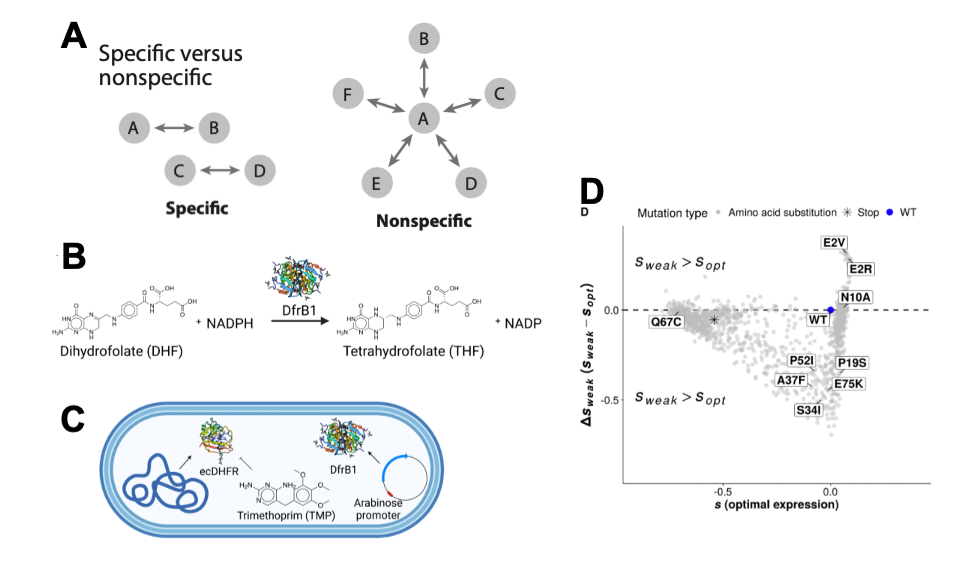 (A) Figure adapted from Domingo et al. (reference 1). Image illustrates the difference between specific and nonspecific epistatic interaction. Specific interactions tend to include a smaller number of residues which can interact physically. Whereas, nonspecific epistasis describes the combined effects of the mutations, independent to the identity of the mutations. One mutation may interact with numerous others and can also be at distance from the mutations it interacts with. A selection of figures from Cisneros et al. 2022 (B-D). (B) Figure 1A details the conversion of DHF to THF via DfrB1. (C) Figure 1B details the approach the authors used to investigate epistasis in this study. (D) Graph showing the effect of amino acid changes on gene expression. Mutants found near the dashed line affect fitness but these effects are not associated with expression alterations. Those labelled have had their growth examined. These data highlight how in some cases mutations can be moderated by expression and in others, independent to expression.

In this study, the authors test for epistatic interactions relating to a specific enzyme using an inducible expression system. DfrB1 is an enzyme that converts dihydrofolate (DHF) into tetrahydrofolate (THF), an important factor required to produce methionine, thymidine, and purines (2). DfrB1 belongs to the type B family of DHFR genes which are Trimethoprim (TMP) resistant (3). Here, the authors use the bacterium E. coli. The DHFR of E. coli (ecDHFR) is sensitive to TMP, whereas DfrB1 resists TMP. By supplying DfrB1 on a plasmid, the authors control expression of DfrB1 by adding arabinose (i.e. increasing or decreasing the concentration of arabinose alters the expression level of DfrB1). By adding TMP, the authors inhibit the activity of ecDHFR ‘forcing’ the E. coli to use DfrB1 supplied on the plasmid. The authors create a library of E. coli containing DfrB1 with different amino acid mutations, covering all positions across the entire gene, then exposed the pool of mutants to varying arabinose concentrations to induced different expression levels of DfrB1. After 10 generations, they sequenced the DNA of the surviving cells. This approach allows the authors to ask how amino acid changes correlate with effects upon fitness when the expression levels of DfrB1 change.

2) Increases or decreases in expression can have different consequences for the same amino acid change. For example, a deleterious mutation under low expression may become masked if expression level of DfrB1 becomes optimal.

3) The location of the amino acid change in the protein also affects fitness i.e mutations in more conserved regions can correlate with more deleterious outcomes. However, if expression of DfrB1 is optimal, then fitness costs relating to amino acids changes at lower/higher DfrB1 expression appear to be masked.

4) Generally, mutations which cause the protein to become unstable (i.e. affect protein abundance) are less likely to show fitness costs unless the level of expression becomes altered, i.e. when expression is low, amino acids which increase protein abundance may be more favourable or the vice versa.

What I liked about this study:

Epistasis is a very exciting field that really highlights the importance of also defining under what genetic contexts a mutation arises. Increasing our understanding of how epistatic interactions play roles in our cells will be key to unravelling complex diseases likes cancers and may allow better medical decision to be made in tackling these illnesses in individuals. Though a simplified representation of epistasis in a bacterial model, the authors data here highlights the importance of how optimal gene expression could act as a ‘filter’ for mutations.

Yes, they are. Pairs of mutations are inherited together. Through generations, they could be separated by recombination, but this will take time, especially when mutations are nearby on a chromosome.

Q2: In this study you have tested an isolated gene central to cellular metabolism, however DHFR works within a larger biochemical pathway. What are the consequences for the other enzymes in the pathway when you alter the expression of mutants of DfrB1? i.e what about intergenic and intragenic epistasis reactions? Is it possible to examine for these interactions in your dataset?

This is a very interesting question but that would demand additional experiments since to test for other types of epistasis, such as intergenic epistasis, we would need to vary other genes as well. It is possible for instance that if a mutation in DfrB1 causes a metabolic cost because it increases protein abundance and enzyme activity, this mutation would be masked by other mutations upstream or downstream of the pathway. The nice thing about this system is that we know a lot about this pathway thanks to the work of other investigators so we can push further our investigations.

Q3: Here you have specifically mutated amino acids, but what about exposing cells to a source of mutagenesis? Could you use your approach to understand epistatic interactions under mutagenic conditions?

Yes, one could change the genetic background of the E. coli cells through random mutagenesis and isolate mutants in which DfrB1 mutants have different effects on fitness to identify the mutations. This would be a way to characterize intergenic epistasis genome-wide. This is now possible with high-throughput sequencing technologies.