Uneven predation and reproductive interference have differing effects on the evolution of sexual dimorphism in the case of Female-Limited-Mimicry.

Batesian mimicry exists when a non-harmful species mimics the colour patterns of a poisonous species in order to evade predation. In some cases, this mimicry can be restricted by sex, such as Female-Limited Mimicry (FLM), despite the fact that avoiding predation should be theoretically advantageous for both sexes. One possible explanation of this sexual dimorphism is that the sexes may experience uneven predation. For instance, female butterflies are generally slower than males and spend more time ovipositing, which may cause them to be easier prey. However, another possible explanation is that female preference for ancestral colourism/non-mimetic males could restrain male members of the species from developing mimicry. For example, reproductive interference caused by mating with heterospecific males can be very costly to females, causing sexual selection costs to outweigh the benefits of males developing a mimic phenotype.

This preprint, Maisonneuve et al (2021), explores this sexual dimorphism further by creating a model to examine the relative contributions of uneven predation and reproductive interference on the evolution of mimicry patterns in butterflies.

In general, there are three common ways FLM is thought to evolve:

2) Both sexes evolve in the same direction (in this case, evolve to mimic the poisonous/model species) but females evolve to a much greater extent.

The direction of male evolution in each of these three trajectories is different and can be differentially affected by ecological forces such as uneven predation and reproductive interference. Thus, examining how the effects of these ecological interactions between the model (poisonous) species and the focal (mimic) species can affect the trajectory of sexual dimorphism can shed light on the role of eco-evolutionary feedback on phenotypic diversification.

To model this behaviour, Maisonneuve et al (2021) first assumed that females were the choosy sex and the cost of choosiness was low. Thus, female mate choice contained three options a) mated with a conspecific male (a male from the same species) b) mated with a heterospecific male (a male from another species) c) refused to mate (represented by 1-cost of choosiness) and picked a, b or c again. Here heterospecific mating were decided to produce no viable offspring. Therefore, reproductive interference is modeled as the likelihood of b) occurring combined with the cost of this interference, accounting for the likelihood and cost of female choosiness, innate preference, and density . Overall, since b) would result in no viable offspring, any reproductive interference should decrease the evolution of mimicry in males.

On the other hand, uneven predation is influence by a) the association between the model species (the poisonous/defended species) and the trait of defense b) the association of the focal species and the trait of defense, and c) the selective costs of departure from the ancestral trait (this is affected by innate defense level, and distanced between ancestral and mimetic traits etc). While a) can confer a selective advantage to both sexes, albeit an uneven one, and c) confers a cost to both sexes, the higher b) is, the less additional association will be gained via mimicry. Thus, in the case of uneven predation, b) is the factor most integral to sexual dimorphism in mimicry. 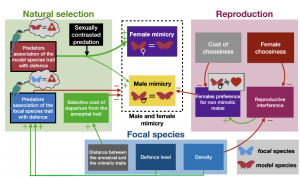 Figure 3 from the preprint: the effects of Natural Selection (Uneven Predation) and Sexual Selection (Reproductive Interference) on the evolution of male and female mimicry. This is a summary of the impact (positive or negative) that the selective forces and model parameters would have on the evolution of female-limited mimicry. Green arrows have a positive impact, while red arrows have a negative impact.

Thus, this model separates out the different ecological and evolutionary factors by which uneven predation and reproductive interference would affect the evolution of mimicry in either sex. This allowed the researchers to gain insight into the impact of multiple ecological interactions on FLM at the same time, while also exploring the interaction between those variables.

If predation overall is high, both sexes are pushed in the same direction and even males begin to mimic the model species, meaning that sexual dimorphism is low. However, when predation is too low, the benefit of mimicry is not particularly high either. Only when predation is moderate such that females gain meaningful benefit from mimicry (but males do not) does sexual dimorphism evolve.

This type of female-limited-mimicry would be closer to the second proposed hypothesis for FLM evolution: both sexes evolve mimicry, but females evolve to a much greater extent.

In contrast, the main drivers of sexual dimorphism through reproductive interference are female choosiness, strength of the interference and innate defense levels.

As expected, as reproductive interference increases in strength, males become less mimetic and more similar to their ancestral trait while females continue to evolve in the direction of the model species (similar to scenario #2 as stated above).

On the other hand, as female choosiness increases, male traits become more similar to model species. With low choosiness, females will continue to mate with males despite their preference, so there is little sexual selection to retain the ancestral trait, thus promoting mimicry in both sexes and decreasing sexual dimorphism. Yet at high choosiness, females are better able to distinguish between hetereospecifc and conspecific males, thus allowing males to develop some degree of mimicry while still being distinct from the model species.  Therefore, only moderate levels of female choosiness promote FLM because its increase in reproductive interference constrains male mimicry (this is similar to #3 scenario, where males and females evolve in opposite directions).

Conversely, high defense level increases sexual dimorphism in females, but has no effect on male traits (similar to scenario #1). However, beyond a certain interaction of density, having a high innate defense makes it no longer advantageous to mimic the model species, thus, there is no mimicry or sexual dimorphism. Yet, as long as the density is below a critical level even if defense is high, divergence will still emerge because males do not benefit from mimicry unless there is both high density and low defense, whereas females will mimic at lower densities than males.

Together this study demonstrates both the critical and contrasting roles that density and innate defense can have on female limited mimicry and sexual dimorphism as well as the various other factors that can influence female lighted mimicry. This link between ecological factors and evolutionary processes (natural selection with respect to uneven predation and sexual selection with respect to reproductive interference) can help make predictions about whether and through what mechanisms sexual dimorphism may evolve in specific populations.

That said, the assumptions of the model may not always be accurate in real world environments. For example, females are not always the choosy sex. Similarly, the authors acknowledge that their model did not factor in any male investment that could potentially benefit females.

Another question that could be explored in more detail is the effect of increased defense on mimicry and sexual dimorphism. The model predicts that high defense levels should increase sexual dimorphism and yet Batesian mimics (focal species with no defense mimicking species with defense) are much more common than mimics where one innated defended species mimics another. This is likely due to the interaction with density (as at high defense and density levels there is no sexual dimorphism, since both sexes benefit equally from defense) but the model does not offer a clear explanation as to why this could occur.

Overall, it would be interesting to see how this would translate to experimental evolution. For instance: