The power of a computational magnifying lens – peering into diversity of proteins, large and small, encoded by microbes in our bodies reveals many novel small ORFs, their putative functions and hints on their evolution and diversity 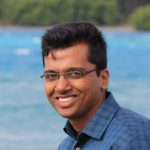 Context: The coding region of genomes, commonly called Open Reading Frames (ORFs), have long been defined using a seemingly arbitrary minimum length cutoff (typically 50aa). Challenging this paradigm, studies over the past decade have shown widespread translation of stable products that fall below this threshold in both prokaryotes and eukaryotes, with functions in quorum sensing, development and calcium signaling, just to name a few. These proteins are encoded not only in intergenic regions, but also within annotated ORFs and have been named small ORFs (sORF). However, these studies have mostly relied on investigating well studied model organisms and so, extensive, large scale studies are notably missing.

Methodology: In this preprint, Sberro et al. tackle the question using large publicly available datasets and computational approaches. They mine metagenomes isolated from >250 human subjects as part of the Human Microbiome Project (NIH HMP I-II), running them through to a battery of analyses and computational pipelines. Using MetaProdigal, a prediction tool optimized to look for sORFs, they identify >2.5 million sORFs. Combining sequence based and domain analysis, these were grouped into ~400,000 clusters. To benchmark their methods, they search this set for ~30 sORFs from model organisms that have been well characterized and surprisingly find that almost half of these are absent in the human microbiome. To prune this list of ~400k clusters and increase confidence in their results, the authors utilize RNAcode, a program that incorporates evolutionary and mutational signatures amongst homologs to narrow down to bona fide sORFs. The authors then proceed to functional prediction and categorization of these sORF families using information about taxonomic specialization, intracellular location prediction based on sequence analysis and comparison to other environmentally sampled metagenomes. Also, as prokaryotic genes are commonly found in operons where functionally related genes are commonly clustered together, the genomic neighbourhood of sORF families was also analyzed for functional annotation. Together, this computational tour de force analysis has unearthed many novel sORF families, indicated putative functions and generates a vast body of hypotheses that can now be experimentally tested. 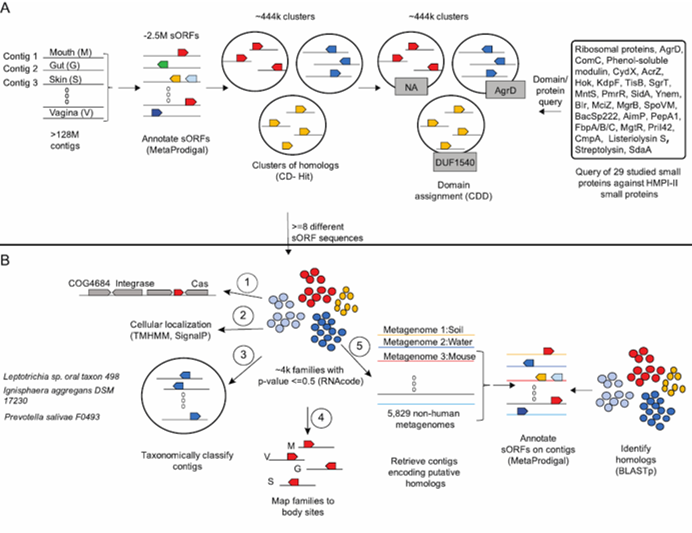 Pipeline for identification and prediction of function of sORFs from human microbiome metagenomic data (taken from Sberro et al., bioRxiv, 2018)

Why I like the work: This work extends previous findings that show the widespread yet unappreciated translation of small proteins, defined as <50aa in length. While earlier work was focused on a small number of well studied model organisms, this expands our knowledge of sORF families by orders of magnitude, uncovering uncharacterized protein domains (and thus folds) in the process. This work has generated a rich resource ripe for future exploration, with promise of discovery of new antibiotics, tools that could be developed to interrogate a plethora of cellular processes and possibly also innovative ways to design cell permeable proteins for drug delivery. The section where the authors clearly spell out potential pitfalls of the methods and conclusions of their work is also particularly commendable. Finally, this work is a great showcase of how combining different computational tools and pipelines can yield important insights into novel biology.