scRNAseq in a FLASH

Understanding how differences in the DNA blueprint (genome) of a cell translate into differences in physical features (phenotype) can help us understand complex diseases like cancer (1). By investigating changes in gene expression levels i.e the ‘transcriptome’ of a cell, we can examine these effects. However, most transcriptomes examine populations of cells giving an overall picture of more common events. This means you miss information about what happens in individual cells, which is important, as individuals can have very different transcriptomes (2). It is possible to study the transcriptome of single cells using single-cell RNA sequencing (scRNA-seq), however most protocols are very time consuming, very expensive and, in some cases, lack sensitivity. Here, the authors modify a previously established scRNA-seq sample processing pipeline to create a protocol which is overall cheaper, more sensitive, and less time-consuming. Their approach ‘FLASH-seq’ will help improve the accessibility of scRNA-seq.

How does SMART-seq work?

FLASH-seq is based upon SMART-seq (switching mechanism at the 5’ end of the RNA template; 3). RNA is extracted from cells and converted into complementary DNA (cDNA) using a template switching reverse transcriptase (RT) enzyme. This enzyme adds a small sequence of bases (for example C nucleotides) to the 5’end of a full-length molecule of cDNA. It then stops and move to another molecule. This process is repeated until in theory all cDNA molecules now also have this small extra sequence of DNA at their 5’ end. These extra sequences, for example several C DNA bases, can now be recognised by another primer, allowing a second strand of DNA to be produced. Polymerase Chain Reaction (PCR) is then used to amplify the cDNAs. The cDNAs are then fragmented (‘broken up’) and prepared for sequencing using a next generation sequencing method. During this process an enzyme known as a transposase (tn5 transposase) adds a known short DNA sequence (Sequence Adaptor) required for the sequencing process. In a new protocol, it is now possible to also add Unique Molecular Identifies (UMIs) to cDNA molecules to enable researchers to find PCR duplicates (i.e duplicates from the same cDNA which enter different beads or flow cells during sequencing), count transcripts and help find rare variations of transcripts as some of these can be excluded during processing.

How does FLASH-seq improve the process? 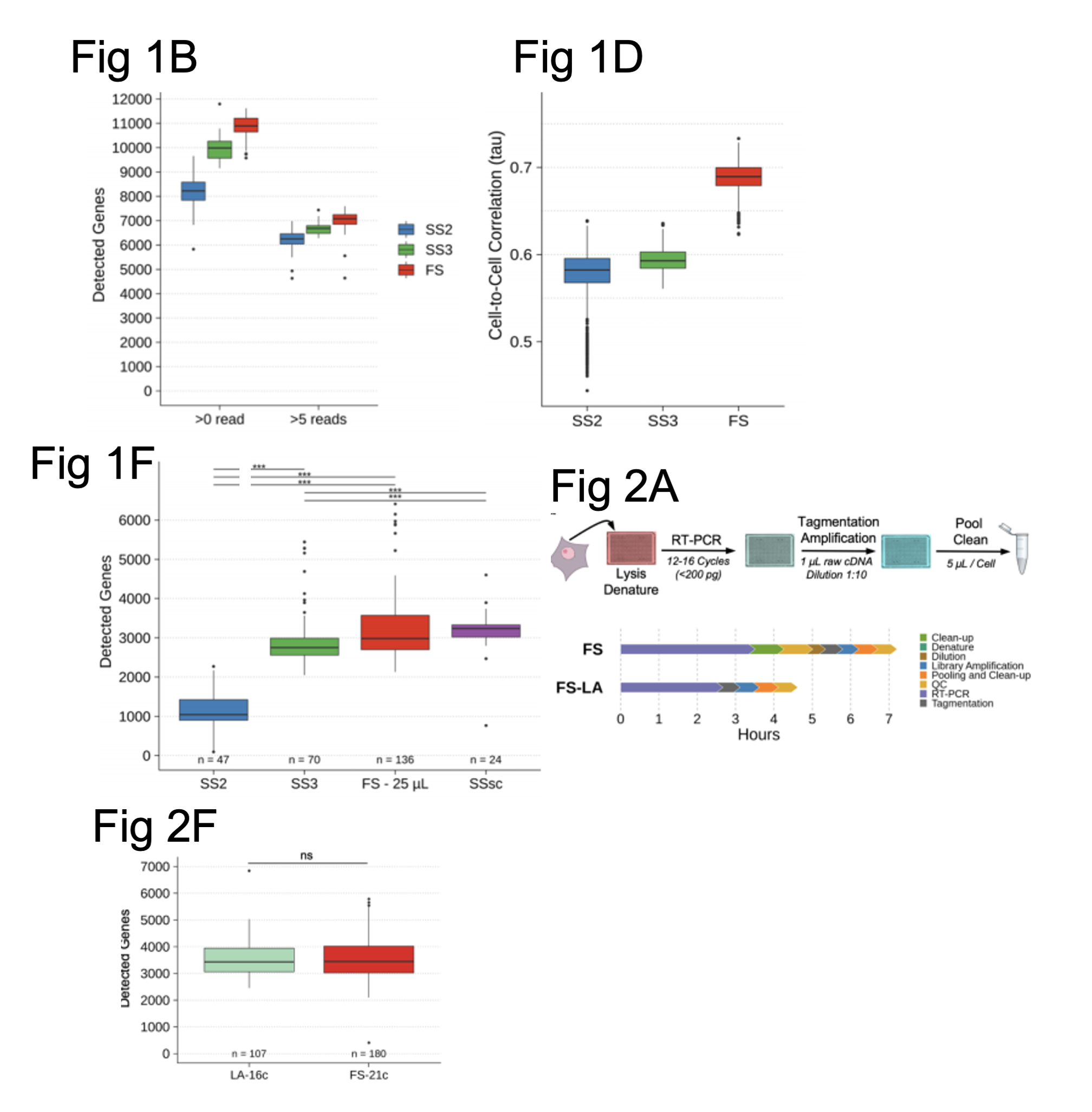 Figure shows a selection of data from Hahaut et al. Fig. 1B shows how many genes were detected using different SMART-seq protocols (SS2 and SS3) compared with FLASH-seq (FS). Fig. 1D shows the correlation between gene expression levels across SS2, SS3 and FLASH-seq protocols. Fig. 1F shows the number of genes detected in hPBMCs using SS2, SS3, a commercial single cell kit SSsc (by Takara Bio) and the FS protocol using the same volume for the final reaction. Fig. 2A. shows an illustration of the workflow for the FLASH-seq low amplification (LA) approach compared to FS. Fig. 2F compares the number of genes detected using either the FS or FS-LA approach in hPBMCs. All figures were adapted from the preprint manuscript (CC-BY-NC-ND 4.0 International license).

scRNA-seq is a new and powerful tool for looking at how individual cells behave. One major barrier however is the cost in addition to the time required to prepare samples. FLASH-seq now offers an opportunity for researchers to not only prepare high quality scRNA-seq samples rapidly but it reduces the costs significantly per cell. Though such experiments are still ‘costly’, this price reduction now means scRNA-seq technology will hopefully become much more accessible to a larger community of research labs.

Q1: What was the most challenging part of the FLASH-seq protocol to optimise?

Q2: Here you have tested FLASH-seq on human cell lines. Do you anticipate any limitations when applying this technique to other experimental organisms, for example yeasts?

Q3: Do you see any sequencing artefacts related to the increased amount of C nucleotides during the RT-PCR step?

Q5: Did you notice any differences in the efficacy of samples prepared using Superscript IV versus Maxima H-Reverse Transcriptase?