When examining the factors that lead to species diversity, much thought is given to the differentiation of ecological niches between species. For instance, rabbits and foxes may occupy the same habitat but occupy different niches because of differences in food sources, predation and ranges. However, even between species that are ecologically equivalent and occupy the same niche, species diversity still exists.

Co-existence theory predicts that competitive exclusion can be  counteracted by two mechanisms: 1) equalizing resources/measures that reduce fitness differences between species or 2) stabilizing mechanism where intraspecies competition outweighs interspecies competition. Most research on stabilizing mechanism has focused on species partitioning of predators/resources or differential responses to spatiotemporal events, but all rely heavily on the idea of negative frequency dependent selection: the idea that rare traits will confer fitness advantages.

For example, predators such as the song thrush (Turdus philomelos), which identify their prey visually, will form a picture of its most common morph. In prey species such as Cepaea nemoralis snails this allows those with rare colour polymorphisms to escape predation, thereby conferring a fitness advantage. Alternatively, a different rare snail species of a dissimilar colour compared to C. nemoralis would also benefit from negative frequency dependent selection, providing a stabilizing mechanism. However, stabilizing mechanisms that relate to resource/predator partitioning or differential fitness response to time/spatial events still focus on species co-existence through the lens of ecological niche differentiation, yet many communities are formed by species with little to no ecological differentiation.

Subsequently, one area that has been under-explored in the realm of species diversity is the contribution of reproduction interactions (within and between species) to species co-existence. Different species will occupy different reproductive niches even when they are ecologically equivalent, suggesting that such interactions may be able to act as a stabilizing mechanism.

Here, there are four different types of reproduction interactions to consider:

Each of these different types can have a different effect on selection and on species co-existence. For example, male-male competition within a species increases when a species is common. If the effect of this competition on mating success and male fitness is negative, species will benefit by being rare. Alternatively, heterospecific male-male competition will promote competitive exclusion, reducing male fitness and longevity if rare. On the other hand, in the case of conspecific sexual conflict (where the goals of fitness between males and females are opposed) such as the case of male harassment of females, negative frequency dependence can promote species co-existence as females will benefit from being rare. Yet, if heterospecific matings lead to reproductive interference or more sexual harassment compared to conspecific matings, female harm will increase, and females will not benefit from being rare.

In this preprint, Gomez-Llano et al set out to test the degree to which these four types of reproductive interactions might have a negative frequency dependence effect on selection (thereby allowing co-existence) using two similar species of damselflies, Enallagram cyathigerum and Ischmura elegans. Specifically, they measured the frequency dependence and the fitness cost of these reproduction interactions and whether these results could account for species co-existence.

The researches created two conditions: one in which I. elegans was common (75%) and E. cyathigerum rare (25%) and one where I. elegans was rare (25%) and E. cyathigerum common (25%), as well as two controls of only one species. They used colour dust labelled on the flies’ claspers and genitals in order to measure mating attempts and between sex interactions. The effect of male-male competition on male fitness was measured by mating success. Specifically, if conspecific competition is stronger, male mating success is expected to decrease when common, and if heterospecific competition is stronger mating success is expected to increase when common. Female harm was measured by the number of claspings and reproductive output, ie the number of female offspring emerged divided by the total number of adult females in the initial generation.

Quantified from 87 females and 89 males, females showed an increase in conspecific claspings when common (χ2=4.61, p=0.031; Figure 2A) but a decrease in heterospecific claspings (χ2=11.12, p<0.001:Figure 2B). This suggest that female harassment is decreased when species are rare. While the frequency treatments did not effect female longevity, there was also a significant negative effect of frequency on female reproductive productivity (F=53.55,p=0.005:Figure 3), females produced more offspring when rare. This suggests a higher incidence of female harassment, and a corresponding decrease in female fitness when species are common which is alleviated when species are rare. Thus, species co-existence may promote female fitness. 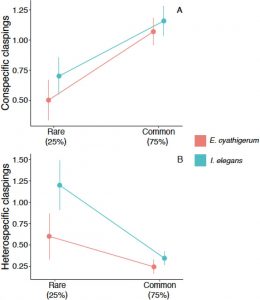 FIGURE 2 The researches created two experimental conditions one in which I. elegans was common (75%) and E. cyathigerum rare (25%) and one where I. elegans was rare (25%) and E. cyathigerum common (25%). This was done to compare the reproductive interactions between and within species. Male fitness was measured as mating success and female harm was measured as number of claspings. (A) They found intraspecies female harm was significantly increased when species were common compared to rare. (B) They found that inter-species female harm was increased when females were rare. (Reprinted from Gomez-Llano et al 2021) 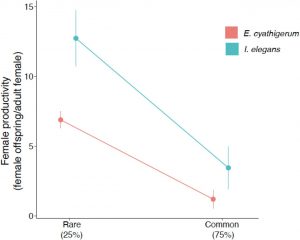 FIGURE 3 Researches used mesocosm experiments to measure the impact of sexual conflict on female fitness. They found a strong negative association between species frequency and female fitness, with females of both species having higher productivity when rare. (Reprinted from Gomez-Llano et al 2021)

2.There was no frequency effect on male mating success

Males did not have higher rate of mating success in either condition, suggesting that conspecific and heterospecific male-male competition are not affected by frequency. Thus, if negative frequency dependence is acting through reproduction interactions it is unlikely to be through same sex interactions.

I chose this paper because it examines the intersection of two phenomena that are relatively understudied: the co-existence of ecologically equivalent species and how environment and frequency can interact with female harm. This paper provides another intrinsic mechanism to explain species co-existence as well, which I think is especially helpful.