Social behaviour and vocalizations of the tent-roosting Honduran White Bat

Article now published in PLOS ONE at https://journals.plos.org/plosone/article?id=10.1371/journal.pone.0248452

Into the lives of Ectophylla alba: a novel ethogram and social call repertoire for the charismatic Honduran white bats

An ethogram is a catalogue of different behaviors exhibited by a species and is a useful tool for understanding the behavioral ecology of animals. Bats are social mammals, and developing ethograms at the bat species level could potentially aid in studying the basis of their social interactions, communication and group living. The Honduran white bat Ectophylla alba is one of the few plant-roosting bat species that construct tents on tree foliage1. They usually live in stable mixed-sex social groups and are known for their characteristic white fur and yellow colorations on ears and nose-leaves2.  Unlike most of the tent-roosting bat species, in E. alba both sexes are involved in tent construction and genetically unrelated individuals usually roost together for an extended time period. Being a social species with such strong group stability, E. alba is an ideal candidate to study social interactions and role of vocalizations in gregarious mammals. However, a detailed ethogram or a social call repertoire is still lacking in this species. Using behavioral observations from two E. alba tents and audio recordings of social vocalizations from individuals, in this preprint the authors first establish an ethogram for E. alba, followed by a vocal repertoire of social calls in this species. By comparing the observed behaviors and vocalizations, this study also provides behavioral contexts of most of their reported social calls and discusses possible roles for the described behaviors.

In this preprint, the authors describe 16 behaviors that exist in E. alba from their roost-based observations. Depending upon the duration and repeatability, these behaviors are classified as either a ‘state’ (with a minimum duration of 10 seconds and the ones that were performed repeatedly, of which the authors describe six) or an ‘event’ (that were instantaneous and singular, accounting for ten of the observed behaviors). This catalogue consists of behaviors exhibited in both day and night and has details of the frequency of and gender involved in each of these behaviors (Figure). While most of these behaviors were exhibited in the nights, events like changing position happened during the day.

From their list, the authors describe two unusual behaviors in greater detail. First, they report a ‘fur chewing’ behavior in males where the male bats licked and gently bit the fur between the shoulder blades of other bats.  The males performed this on individuals of both sexes including a pup, and there were no forms of aggression observed from the individual that gets bitten. After ‘fur chewing’ the recipient bat is described to have a wet spot on their back due to the biter’s saliva. By citing similar saliva-based scent-marking behaviors that exist in another tent-roosting bat species3, the authors discuss a possible social function for this behavior. They suggest the possibility of individuals identifying each other using these salivary scent-marks but recognize that this requires further investigation 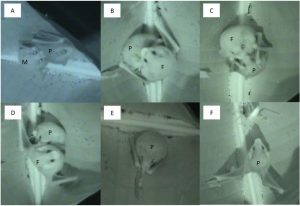 Figure (from the preprint): Social behaviors of E. alba. A: Fur chewing behavior. The male (M) is chewing/licking the back of the pup (P). B: Nursing. The pup (P) is attached to the nipple of the female (F). C: Licking. The pup (P) is licking the mouth of the female (F) to solicit nursing. D: Twitching. The female (F) is shaking the pup (P) off after nursing. E: Play. The pup is playing with a torn leaf piece inside the tent. F: Startle response. The pup (P) shows the typical wing posture when frightened, in this case by a grasshopper that has wandered into the tent. Credits: Authors of the preprint

Second, there is a detailed description of a ‘play’ behavior in pups where pups left alone in the tent started to sniff, grasp and chew torn pieces of leaves that hung inside the tents. Social play is common in many bat species and mammals. In the discussion the authors first provide the accepted definition of a play behavior and then compare their observations with it. They list out the bat species in which such play behavior has been reported and then provide a possible role for this in E. alba. Since the pups in this study played by modifying leaf structures, the authors suggest that this object-based play behavior might be a precursor for tent construction in the future. They also discuss how different aspects of the observed play behavior has similarities with an actual tent construction event in adults.

Finally, by comparing video and audio information, the authors provide a behavioral context for seven out of the ten distinct call types described earlier.  While three of these call types had affiliative contexts such as grooming and mother-pup interaction, two had an agonistic context. Additional descriptions of some of the behavioral events that happened during these call emissions (eg. Emission of an aggressive call when a mosquito stung the bat) are provided. The authors show that their vocal repertoire fits well with the call repertoire of bat species of the same family as E. alba and also highlight that the acoustic features of the pup isolation call in E. alba is different from the other species. They discuss the possibility of the roosting ecology of E. alba playing a role in their call features causing a difference among species. Finally, they highlight the importance of such studies and open up some avenues that could be explored in this field in future.

Tent-constructing bats have evolved an effective way of day roosting that stands unique from most other bat species. However, choosing leaf foliage as a roosting substrate comes with its own cost as it does not provide a long-term shelter for bats unlike caves or tree holes. Owing to many factors, tent roosting bats usually live in smaller social groups compared to cave roosting species. The current study, focusing on the tent roosting Honduran white bat Ectophylla alba, has provided an ethogram and call repertoire in this species. Among tent-constructing bats, E. alba stands unique as both sexes are involved in tent making and their mixed-sex social groups are highly stable over time irrespective of genetic relatedness. Studying such a species with rare roosting ecology and strong social organization is crucial to understand evolutionary adaptations, social organization and vocal communication in mammals. Since the current study has attempted to explore some of these aspects in the Honduran white bats, I chose it for a preLights post.

Questions and comments to the authors