The hegemony of the English language within academia is self-evident, with figures reporting more than 90% of scientific publications being written in English. The (apparent) unquestionability of such status quo is so entrenched in the collective that most people would not bat an eye when coming across bibliographies made up, in their entirety, of references written in English. And this may indeed not only be the norm, but the expectation when we* perform literature searches, when we write our own papers and theses, when we review the appropriateness of a colleague’s references in a submitted manuscript. The bibliography of that paper we are preparing right now? Only English-written references. And because we look for (and see all around us) knowledge written in English, we might start to believe that knowledge is written in English, it just is.

(*this highlight is written with the expectation of a majoritary (white) Western Academic readership. As such, what is here defined as “our”, “we”, “us”, “normal” is to be interpreted accordingly)

Yet, knowledge producers exist and produce knowledge all around the globe. And in its simplicity and self-evidence this acknowledgment is revolutionary. Not only because it de-centres knowledge production away from it being an exclusive export of English-writing Western Academic spaces, but also because it means that knowledge is accordingly produced in a varied range of languages. As predominant as English-written scientific literature may be, literature searches that only source from it (and the conclusions coming from such searches!) are thus incomplete. But does that really necessarily introduce gaps? Biases?

We may all, to different degrees, hold preconceived (or instilled) notions about non-English scientific knowledge, and use them as a justification of English-centred literature searches:

Here comes the preprint I would like to highlight here. In this preprint, a multi-lingual team of authors screened over 419000 (!) peer-reviewed papers, across 16 languages, to systematically address each of the preconceptions listed above, and test whether these are grounded on evidence, or whether they are simply misconceptions.

The paper is one of few of its kind where the actual impact of including/excluding non-English literature is translated in quantitative terms and real world examples. In the specific case of this preprint, the field is global biodiversity conservation research. Indeed the preprint opens with a damning statement: that if one looks at evidence synthesis approaches in the field to date (which in turn inform biodiversity conservation policies!), these have ignored non-English science. While this would be damning regardless, it is even more so given that areas of rich biodiversity concentrate in countries that speak languages other than English. 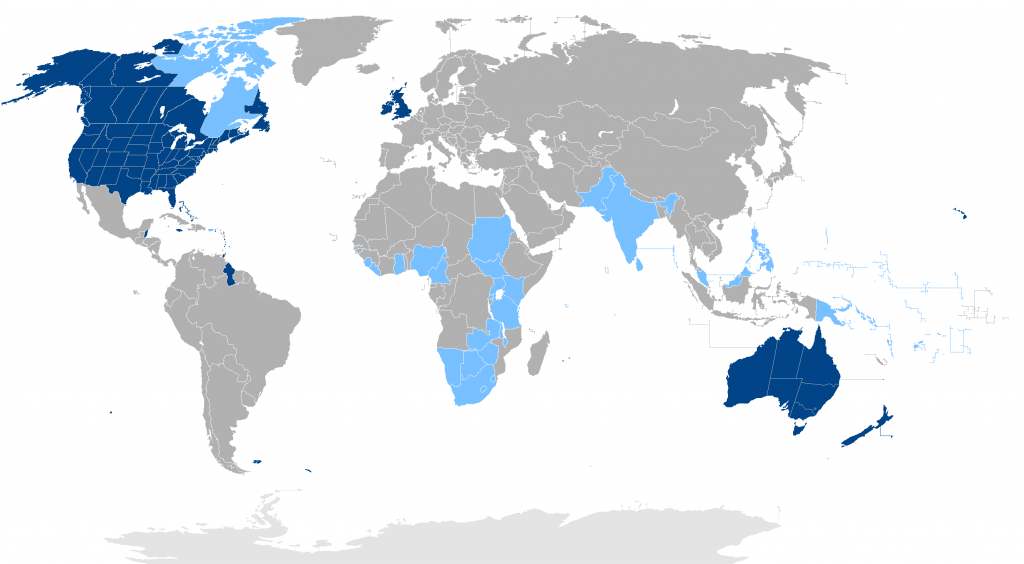 FIGURE 1: Countries in the world where English is the native language (dark blue), where it is an official language (but not majority language; light blue), and where it is neither (grey). CC-BY https://commons.wikimedia.org/wiki/File:Anglospeak.png

By screening 419,680 peer-reviewed papers across 16 languages, the authors show that most of the preconceived notions listed above – at least in the field they analysed (global conservation research)- are indeed misconceptions:

False. One third of all relevant papers to the topic were written in languages other than English. In other words, an evidence synthesis search restricted to English-written texts would only find two thirds of all relevant information.

False. The number of relevant studies written in languages other than English has been increasing every year (especially for languages like Portuguese, Russian, and traditional Chinese)

False. Articles written in languages other than English expand the geographical range of documented biodiversity conservation interventions by 25%. Many non-English studies are actually providing data on areas that are not covered by any English counterpart.  In the specific case of this preprint, an English-centred search would have lost 5%, 32%, and 9% of the evidence on amphibian, bird, and mammal species, respectively. Regarding articles on the conservation of threatened species, it would have lost 23% of the coverage on bird species.

The authors however do find a correlation between research written in languages other than English, and, on average, less robust study designs.

Overall, the authors show that – at least for the field of biodiversity conservation – the focus on English-literature translates in a loss of ⅓ of relevant literature, and of unique literature as such. Accordingly, evidence synthesis that does not include non-English literature ends up with avoidable gaps, and these gaps often concern areas/communities most affected by issues of biodiversity conservation and that would therefore be most affected by global initiatives on conservation. Finally, ignoring non-English publications also often means ignoring knowledge produced by local practitioners, that is those very knowledge producers with the closest ties to the topics they are investigating.

Ramírez-Castañeda, Valeria. “Disadvantages in preparing and publishing scientific papers caused by the dominance of the English language in science: The case of Colombian researchers in biological sciences.” PloS one 15.9 (2020): e0238372.

Gordin, Michael D. Scientific Babel: How science was done before and after global English. University of Chicago Press, 2015.

I find this excellent food for thought, and I’m so glad for having been exposed to this work thanks to your prelight!
Some of the questions you raise seem to challenge the idea that we need to adopt a “lingua franca”, such as English, to be able to communicate research. In fact, we could have research done in many different languages, yet being able to integrate those just by discussing it in groups of polyglot scientists. In a way this would also blur the canonical “boundaries” of research teams and lead us to a more connected, extended community of scholars.