Brucella 1: 0 host cell, Brucella gains upperhand against its host by employing its T4SS effector to take control of the ER quality control machinery.

Most intracellular pathogens have devised mechanisms to establish a replicative niche within their host cells. These intracellular pathogens employ their secretion system to inject a cohort of effector proteins directly into their host cell, thus subverting key host defense mechanisms. Furthermore, they have developed diverse strategies to avoid or survive the hostile environment of the macrophage phagosome: they can prevent phagocytosis (Yersinia species), alter phagocytosis to target the bacterium to a novel phagosome (Salmonella species), escape from the phagosome into the cytosol by lysing the vacuolar membrane (Listeria and Shigella species), block the fusion of phagosomes with lysosomes (Legionella species), block or attenuate acidification of phagolysosomes (Mycobacterium tuberculosis), or adapt to resist the antimicrobial activity of the fused phagolysosome (Salmonella species)1

Brucella spp., a facultative intracellular pathogen uses its Type 4 secretion system (T4SS) to secrete virulence proteins that allow it to infect and survive both in phagocytes and non-phagocytic cells and thus cause brucellosis. Upon infection, Brucella resides within a phagosome-like compartment called the Brucella containing vacuole (BCV). However, only a few effectors have been characterized for which we have a full grasp of how they contribute to pathogenesis.

In the study the authors identify and characterize a new T4SS Brucella effector, BspL, that is responsible for hijacking and circumventing the ER homeostasis machinery. The authors further describe that this previously unknown effector, BspL, directly interacts and targets Herp, a key component of the ER quality control system. This tight regulation of the ER quality control system allows the pathogen to effectively control the dynamics of the formation of Brucella containing vacuoles. As a result, BspL delays formation of a BCVs and subsequent release of bacteria from the cell. 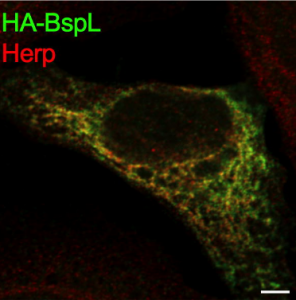 The article further demonstrates the diversity of mechanisms that numerous intracellular pathogens employ to perturb intracellular trafficking to their own benefit in establishing and sustaining infection. This clearly opens up avenues where such pathogens could be targeted with precision, instead of using antibiotics.

It still remains to be seen what are the precise mechanisms by which BspL regulates the ER quality control system. Does BspL prevent the degradation of Herp? Does the binding of the effector to Herp add to the stability of the complex? Under such ER stress, what is the status of the other autophagy machinery systems? Does BspL act in concert with another effector (yet to be identified) that influences Herp stability?

Recently, ER has been shown to form associations with mitochondria and lysosomes and play an important role in local protein synthesis. Is it early to predict from these data that the association of BspL with ER can also be playing a role in such a specialized local system?