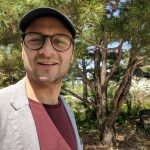 We do not yet know how the mammalian brain orchestrates movement and how brain-wide changes in neuronal activity occur during and before movements. It is well established that the cerebellum is important for learning and executing fine motor tasks, and that there is preparatory activity in the motor neocortex before movements are initiated. These interact via the motor thalamus and the basal pontine nucleus, and previous work has demonstrated control of motor neocortex by optogenetic activation of cerebellar Purkinje cells1. However, it is unclear how the cerebellum participates in neocortical activity outside the context of fine motor control, and it has not been shown how the cerebellum modulates sensory task related activity in the motor neocortex.

To address these issues Chabrol and colleagues set up a sensorimotor virtual reality task for head-fixed mice so that neuronal activity could be recorded with silicon probes during goal-directed movement. Neuronal firing was recorded from three sites along the cerebellar-motor neocortex pathway while trained mice performed the task. The task required mice to run along a virtual corridor and stop after a particular visual cue displayed on the virtual walls in order to get a soy milk reward through a licking spout. This particular task is a brilliant choice because it incorporates two types of movement, locomotion and licking. In principle, the results can therefore contribute to two related topics: preparatory activity2 which is commonly studied in subjects that withhold motion until a start cue, and brain control of locomotion3,4.

The main findings in this preprint arise from activity histograms aligned to the time point where the mouse stops in the reward zone and increases licking as it receives the reward. In more detail, running speed gradually decreases and licking rate increases in the 2 seconds before this time point. Unit recordings from the dentate nucleus (DN, a cerebellar output nucleus), lateral crus 1 cerebellar cortex and anterolateral motor neocortex (ALM) revealed neurons that have distinct activity profiles around reward delivery. Approximately half of the neurons in DN and ALM fell into three main categories of preparatory activity2: ones that ramp up activity during the 2 seconds before reward (type 1), ones that ramp up and then increase further after reward delivery (type 2) and ones that only increase activity after reward delivery (type 3). In contrast, output neurons of the cerebellar cortex decreased firing on average during the 2 seconds before reward.

The firing patterns suggested to the authors that the inhibitory cerebellar cortex neurons, by decreasing their activity, may allow DN to excite ALM, which is located more than half-way across the brain. The authors put this to the test from the reverse perspective by optogenetically activating the cerebellar cortex Purkinje neurons, and found that this rapidly decreased firing of the majority of DN and ALM neurons showing preparatory activity. While this manipulation did not have an immediate effect on licking rate, the mice decreased running speed during the optogenetic light pulse, causing them to reach the reward later in the trial. This suggests that these neurons, that seemed to be involved in organizing licking (due to their activity patterns most closely mirroring lick rate), might be crucial for coordinating goal-directed locomotion and licking. The recordings in the cerebellar cortex were targeted to a part of crus 1 that responds to activation of primary visual cortex and limb motor cortex, to hone in on the faculties relevant to the task. However, it is unclear whether the findings could be generalizable to the rest of the cerebellum as well.

Part of my current project involves neural control of locomotion, so I was delighted when my daily bioRxiv subject collection email alert pointed out such a competent piece of related science, fresh off the bench and shared openly via bioRxiv. I was initially attracted to the optogenetic manipulation experiment showing that cerebellar crus 1 Purkinje cells can rapidly control ongoing goal-directed locomotion. This is a small part of the study, though, and the simple conclusion that this circuit controls locomotion is confounded by the plethora of likely downstream effects on cortical, thalamic and rubrospinal circuits.

The main message of the study is that the cerebellum is part of the brain wide circuit that produces preparatory activity. The results show clearly that cerebellar disinhibition modulates motor planning related neuronal activity in a neocortical area more than half-way across the brain. As a firm believer in the importance local microcircuits, such a potent long-range effect gives me a welcome chance to reflect on my beliefs.

This and other studies2 have shown that preparatory activity arises in widely distributed, interdependent motor brain regions. The next challenge should be to find how these circuits interact to turn preparatory activity into executable movements. Numerous recent studies have demonstrated profound contributions to normal locomotion from key neuronal populations. Optogenetics has allowed the necessary millisecond precision control of these neurons to assess their contributions. Recently, contributions to locomotion from midbrain dopamine neurons5, mesencephalic locomotor region neurons6, caudal brainstem neurons7 and cerebellar lobule V Purkinje cells8 have been dissected primarily with optogenetics. These add to a growing description of brain control of locomotion3,4. Comparing some of these studies to this preprint raises some general questions: If an optogenetic manipulation stops an animal from moving, is that enough to conclude that the affected cells control locomotion, or is more detailed knowledge of the activity of other locomotion controlling neurons required? Is goal-directed locomotion controlled by different circuits than non-goal-directed locomotion, i.e., self-paced running? Would the activity profiles of the neurons recorded in this preprint, for example, be substantially different during non-goal-oriented movements? And would their manipulation outside the task yield similar results? Perhaps these questions would necessitate another study with similarly rigorous recordings. Still, it is wonderful that the authors chose an experimental paradigm that can contribute to two fields at once.

We welcome the opportunity to discuss our recent work highlighted in preLights. Recent technological advances offering the ability to record from large neuronal networks allow neuroscientists to tackle the complexity of brain-wide activity during controlled animal behaviour. Impressive work from the lab of Karel Svoboda and many others has paved the way for us to study complex computations of motor preparation and action selection taking place in the frontal motor neocortex in mouse models of goal directed behaviour.  More recently, it has contributed to our appreciation of the central role of thalamocortical loops in those processes, bringing into question the contribution of subcortical structures.

Although the cortico-cerebellar circuits constitute one of the largest systems in the mammalian brain, little is known about their contribution to behaviour. In this manuscript we show that cerebellar inputs to the motor thalamus are crucial components of a brain-wide circuit for the computation of motor preparation. These results add to the growing body of evidence implicating the cerebellum in functions that are not strictly related to motor behaviour. Much remains to be understood about the specific contribution of the cerebellum to this kind of long-timescale neuronal activity in the neocortex. Given the stereotypical organisation of the cerebellar cortex and its connectivity with multiple regions of the neocortex, it is tempting to propose that it performs similar computations whether it is engaged in fine motor control or cognitive functions such as working memory. During motor preparation, the cerebellum might predict the consequences of sensory-motor states on a fast timescale (e.g. proximity of reward) while fronto-parietal cortices might contribute to accumulation of sensory and internal state information to plan future behaviour. Therefore, in the context of coordination between locomotion and licking, described nicely by Mahesh in this preLights piece, the role of the cerebellum might be to instruct the neocortex as to when to engage the transition from one action to the next. As we gather more data on brain-wide activity, capturing the specific role of each region engaged in global computations represents a challenging and crucial step in our understanding of brain function.