Help, my host makes me unstable! How host defenses contribute to genome instability in C. albicans

When environmental conditions change, cells may need to rapidly adapt in order to survive. For disease causing organisms (pathogens), the immune system is a source of stress as it aims to eliminate them. Thus, many pathogens adapt to avoid being destroyed. One way to do this is by changing the number of gene and/or chromosomes by either increasing or decreasing them. By changing the numbers of genes/chromosomes, cells can change the pattern of gene expression of these altered regions of DNA.  For example, an increase in the numbers of copies of a gene involved in drug resistance could promote survival. Conversely, they can get rid of copies of unfavourable genes which may make them less fit to survive (1). Copy number changes also create genetic diversity within the population. The fungal pathogen Candida albicans, can cause a life-threatening blood-borne infection in humans whose immune systems are compromised. In healthy people, C. albicans can be a normal part of our gut microbiome (microscopic organisms in our gut) and does not cause disease. This means our immune system stops this organism from making us sick however, sometimes disease emerges meaning C. albicans is able to overcome the immune system and become pathogenic (2). C. albicans is genetically diverse, with single nucleotide polymorphisms (SNPs; a change in single base pair in a DNA sequence) and loss of heterozygosity (LOH) seen in populations isolate from infections. LOH is an event in which information from one of the chromosome pairs is lost meaning the information is found only on one copy and not on both. This suggests that the genome of C. albicans is unstable (or ‘plastic’) and may change in response to stimuli from the host (3-5), for example, reactive oxygen species (ROS) or other antimicrobial peptides (AMPs). Here, the authors ask how ROS and AMPs from the host affect the genome of C. albicans. 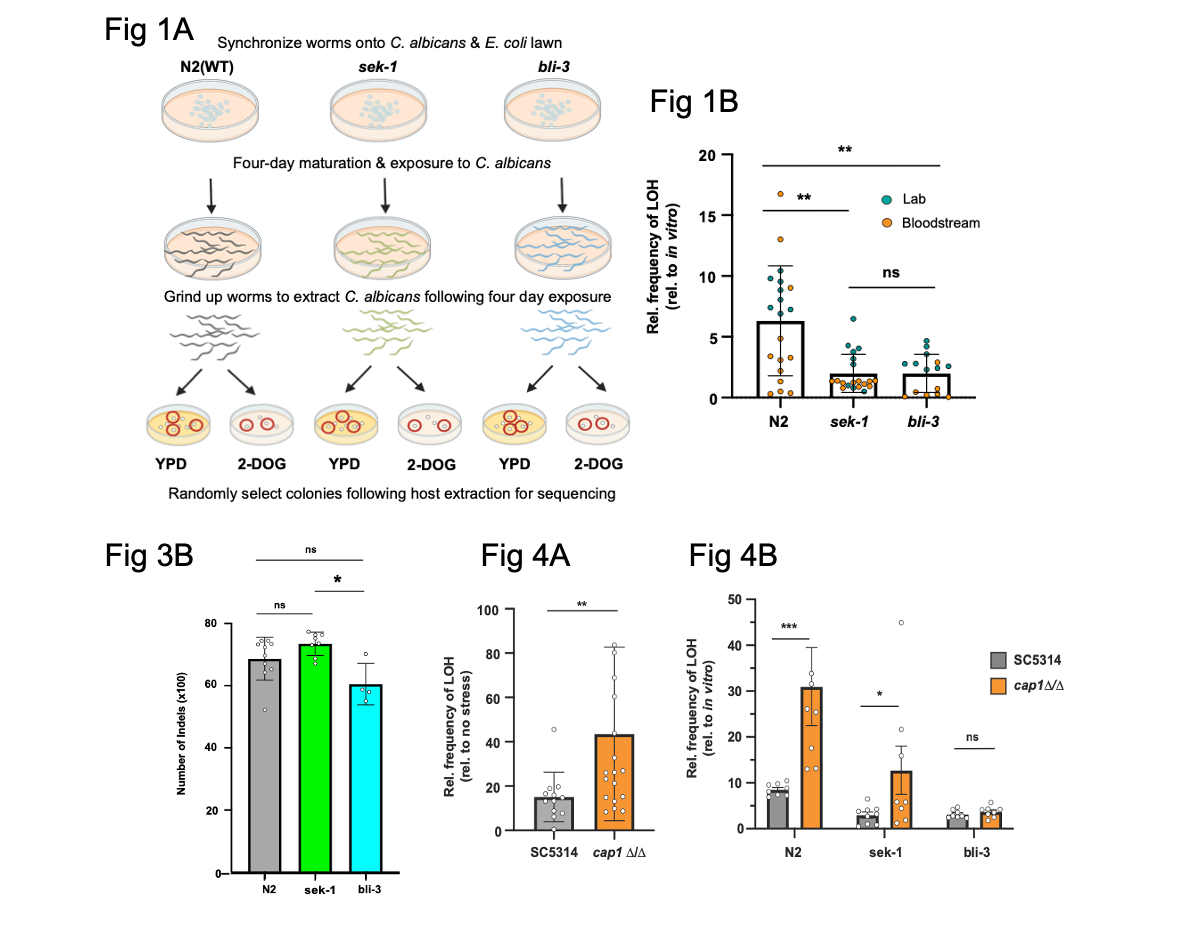 In this study, the authors infect wildtype (WT) and immunocompromised (mutant) nematode worms (Caenorhabditis elegans) with C. albicans and monitor effects on the C. albicans genome using several experimental approaches. Specifically, they ask how the innate immune response affects the genome of C. albicans in two mutant strains of C. elegans; one, is unable to effectively produce AMPs (the ‘sek-1’ mutant) and the other is defective in ROS production (the ‘bli-3’ mutant).

First, the authors investigate if C. albicans isolated from mutant and WTs worms showed differences in genome stability by measuring LOH. They examined for LOH at the GAL1 (galactokinase) locus. They infected worms with C. albicans, which they later extracted then selected for on plates containing the compound 2-deoxy-D-galactose (2-DOG). This means allow fungi which have lost GAL1 will grow (i.e a mark of LOH and a proxy for genomic instability). They found C. albicans taken from immunocompromised hosts showed less LOH events suggesting that exposure to the host immune response may cause instability (i.e the fungi are more prone to LOH).

Using the same experimental set up, the looked at how the genome changed by sequencing DNA from C. albicans. They found that C. albicans extracted from WT nematodes contained wide-spread changes to the genome including aneuploidy (i.e uneven numbers of chromosomes) and other LOH events but C. albicans isolated from mutant worms showed less changes. The authors then looked for SNPs and INDELs (inserted regions and/or deleted regions of DNA), which are also indicators of genome instability. They found no difference between C. albicans from mutant or WT worms though significantly less INDELs were detected in the ROS defective (“bli-3”) mutant compared to the AMP (“sek-1”) mutant. This finding could suggest that ROS exposure may induce INDELs in C. albicans.

ROS production by the host might affect C. albicans genome stability. To investigate this further, the authors treated WT C. albicans and a mutant strain which is defective in responding and detoxifying ROS (“cap1” mutant) with hydrogen peroxide (H202), which induces ROS. They then measured LOH at the GAL1 locus. They found LOH events were detectable in WT and mutant cells but they were more frequent in the mutants. This suggests that ROS can induce genome instability in C. albicans but also cap1 is needed to detoxify ROSs and if lacking, increase instability can be detected. They also performed the same experiment in the worms reporting similar findings.

Lastly, the authors investigated if antioxidant treatment (treating with Lipoic acid) could counteract the ROS induced genome instability in C. albicans. They found that adding lipoic acid reduced the frequency of LOH events at the GAL1 locus in the AMP deficient worms but there was no change in the ROS deficient worms. This suggests that ROS exposure correlates with C. albicans genome instability.

Understanding how pathogens interact with their host is important to understand how we can effectively treat diseases. For C. albicans, which can also exist as a commensal, understanding how these fungal organisms interacts with the host immune response will uncover aspects of how this organism can become pathogenic. Here, the authors build upon their previous findings to ask if the innate immune defense of the host could alter the genome of C. albicans. Using a targeted approach and well-established assays, their data supports their hypothesis. It will be exciting to see how the authors investigate this aspect of host-pathogen interaction further to gain more intimate details into the underlying pathways.

Q1: Your data suggests ROS exposure induces LOH and wider-spread genomic changes in C. albicans. Do you see changes in copy numbers or SNP accumulation in genes associated with C. albicans resistance to ROS? Are there predominant genetic phenotypes that result from ROS exposure in the population?

Q2: C. albicans is a common commensal fungus living in an environmental also populated by other organisms. Is there evidence, or are you planning to test, if interactions between C. albicans and other commensals could also alter genome stability in this organism?

Q4: In healthy hosts you also detect genome instability events in C. albicans such as an extra copy of chromosome 6 you suggest might contribute to a commensal like phenotype. Do you see any evidence of genes present on chromosome 6 that might be important for promoting a ‘less pathogenic’ phenotype?