Our brain has an enormous capacity for learning and memorizing, and neuroscientists are only just beginning to understand the mysteries of memory formation and retrieval. The specific neurons involved in memory formation are called memory trace cells or engram cells. These show a characteristic gene expression profile of immediate early genes such as Arc, c-Fos and Egr-1, which are activated transiently and rapidly in response to cellular stimuli. However, conventional methods used to examine immediate early gene transcription, for example RNA fluorescence in situ hybridization (FISH), immunostaining and use of promoter-driven reporter proteins, are limited in terms of temporal resolution and can only provide a snapshot of events (1, 2). In the last few years, researchers have developed a broad palette of optical tools to study neuronal activity during memory formation including genetically encoded indicators for changes in calcium levels or voltage (3).

So far, it has been impossible to continually monitor gene expression in real-time in live animals. In their preprint, Lee et al. address this obstacle by creating a genetically encoded RNA indicator (GERI) mouse line.

Development of a GERI to study memory formation

The PP7 bacteriophage coat protein (PCP) binds with high specificity to its cognate PP7 RNA binding site (PBS). The authors employed this PCP-PBS binding system to develop a novel tool for imaging of Arc mRNA. They generated a transgenic PCP-GFP mouse neuronally expressing tandem PCP fused to tandem GFP. Additionally, an Arc-PBS knock-in mouse line where 24x PBS repeats were integrated into the 3’ untranslated region of the Arc gene was created. In the resulting hybrid mouse obtained through crossing the two lines (PCPxArc-PBS), every synthesized Arc mRNA was endogenously labelled with tandem GFP repeats (Fig. 1A). The crossed transgenic mice were subjected to contextual fear conditioning (CFC) wherein animals were exposed to a novel environment and provided with an aversive stimulus (foot shocks). This resulted in fear memory formation, thereby allowing for the investigation  of Arc mRNA expression (Fig. 1B). The authors relied on two-photon excitation microscopy of the dorsal CA1 brain region to visualize the labelled mRNA (Fig. 1C). Upon appropriate background correction of the obtained images, a subset of neurons showed bright spots localized in the nucleus, which corresponded to transcription start sites of Arc mRNA (Fig.1D). An investigation of these bright spots through an independent method (two-color FISH using fluorescent probes complementary to the coding sequence and the PBS sequence of the mRNA) confirmed that transcription start sites appear as bright puncta in the acquired images.

In contrast to FISH, this newly developed GERI tool allows for time-lapse imaging of Arc mRNA to study their temporal dynamics. The fraction of neurons with Arc transcription start sites (Arc+) saturated within 7 min after CFC and the signal disappeared 20 min after CFC. 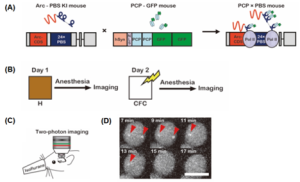 Next, the authors analyzed changes in Arc-expressing neuronal populations in two different brain regions, the hippocampal CA1 and cortex, during memory encoding and retrieval in the context of fear. Mice were conditioned in a specific context and then repeatedly exposed to this context on three consecutive days to retrieve fear memory. In the CA1 region, 14-20% of the neurons expressed Arc which remained constant during the retrieval trials, whereas in the cortex about 24% of the neurons transcribed Arc with steady increase during the retrieval trials. Interestingly, in the latter area, the group of neurons continuously transcribing Arc during conditioning as well as retrieval was notably higher and the overlap percentage of Arc+ neurons was significantly greater than expected by chance even in a two-day interval trial.

Concordant observations were made over a period of four weeks confirming that repeated reactivation of the same Arc+ neurons was more likely in the cortex than in the CA1, where a nearly random group of cells transcribed Arc following re-exposure to a specific context. In other words, CA1 Arc-expressing neurons seem to have a faster turnover, while in the cortex the Arc+ population is more stable.

Dual imaging of GERI and a calcium indicator

Having established the dynamic nature of Arc+ neurons in the CA1, the authors utilized a dual-color imaging (of Arc and Ca2+) paradigm to analyze the activity pattern in these cells. PCP-PBS mice were injected with an adeno-associated virus expressing jRGECO1a (a red fluorophore for Ca2+ detection) in the dorsal CA1 region. Awake animals were head-fixed and allowed to move on a spherical treadmill whilst navigating a virtual reality (VR) track. These mice were exposed to novel context A for the first two days, and a new context on the third day. Baseline level of Arc was imaged prior to VR exposure, followed by Ca2+ imaging during active navigation, and Arc imaging in anaesthetized animals. VR navigation significantly increased the fraction of Arc+ neurons across the three days of exposure, without impacting the calcium activity. However, on average, neurons that expressed Arc were more active than Arc-negative cells (Arc-), as was evident from calcium activity, burst and theta-burst rates. Activity was consistently higher in cells that expressed Arc on the first two days of exposure (Arc++) compared to Arc– cells. This suggests the involvement of neuronal Arc++ subpopulation in contextual memory.

To determine the overlap between Arc expressing cells and place ensembles upon different context exposures, the authors performed spatial correlation between these groups. Arc+ neurons on day 1 had weak correlation with place cells and significantly lower spatial information than Arc– neurons. This indicates Arc+ neurons act as contributors to episodic memory, rather than storing spatial information. Measuring the Ca2+ activity in different subpopulations of Arc-expressing cells revealed that Arc++ cells had higher computed theta-burst activity in context A. Such activity patterns were also observed in cells expressing Arc on days 2 and 3 in context B. These results are indicative of contextual memory storage in context-specific subpopulations of neurons. Arc++ neurons also had a greater extent of correlation with activity of CA1 neurons during not only memory encoding and storage, but also its retrieval.

Why is this paper interesting?

Memory and its formation has always been a fascinating topic, but unravelling the underlying mechanisms is very challenging. Despite the recent development of new tools, analyzing neuronal activity based on RNA transcription has been limited given that continuously studying RNA expression in real-time has not been feasible. This newly developed GERI by Lee et al. allows easy tracking of RNA expression and transcription start sites over time, without requiring fixing and staining of cells. This RNA imaging technique might facilitate major advances in the field of memory formation and provides virtually endless opportunities to study memory formation in different paradigms. For example, it can be combined with various other tools, such as biosensors or optogenetic tools, or with other mouse models to study pathological changes in memory formation in the context of aging or neurodegeneration, for example in Alzheimer’s disease.

1)    Are you also planning to use this technique to look at other mRNAs related to memory formation such as c-Fos or Egr-1? Do you plan on multiplexing GERI with different fluorophores for simultaneous visualization of different mRNAs?

We are currently trying to visualize c-Fos and Egr-1 mRNAs in a similar but better way to get an improved signal. We are also very interested in simultaneous imaging of different species of mRNAs (for example, visualization of c-Fos and Arc to unravel how differently IEG activates upon memory recall). Different mRNAs could be labeled with an orthogonal tagging system such as the combination of MS2 and PP7 systems.

2)    Would different sensory modalities (odor or noises) have a differential impact on the location and number of Arc+ neurons?

In terms of sparse coding, it is a very important question as to how many neurons are used to store sensory information. In our paper, we performed two very different experiments – contextual fear conditioning and virtual reality exploration –  but the percentage of Arc+ neurons in CA1 was similar in both cases. A more sophisticated experiment should be designed to answer this question, and we believe it is one of the experiments we need to do in the future.